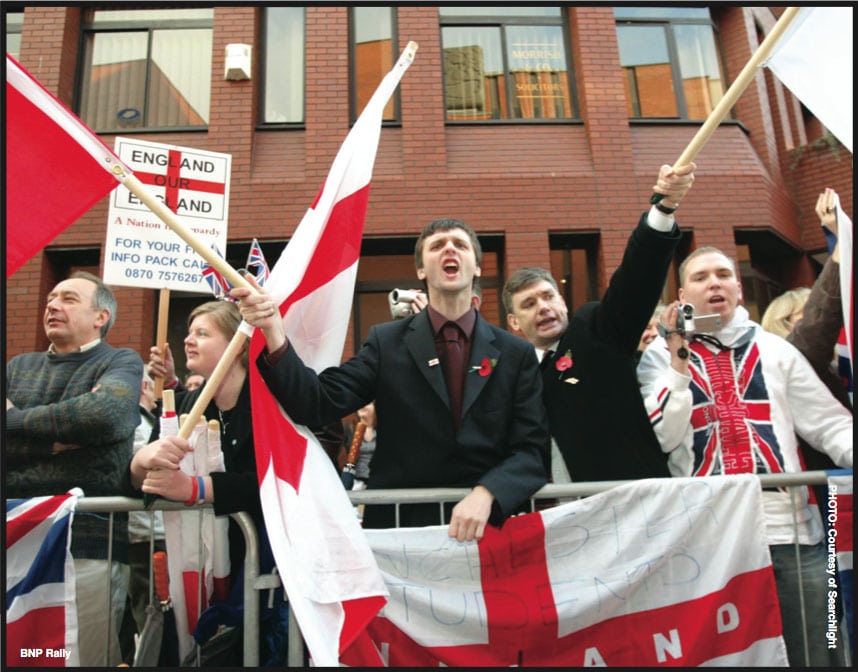 IN MARCH this year the national press was riddled with that photo of the bludgeoned, bloody face of British National Party member Tony Ward. Anti-fascist protestersallegedly attacked Ward at a failed BNP fundraiser in Leigh, Greater Manchester.

While both sides wasted no time in accusing the other of striking first, this incident raises a serious question: has this party of radical extremists become such a serious threat that violence against them is warranted? Clearly some must think so. The brutal confrontation led to the cancellation of a multi-venue Love Music Hate Racism club night the following evening for public safety reasons.

The BNP’s newfound prevalence in the press is due to the fact that the party has entered over 60 candidates to stand in this June’s European elections. Eight of these candidates, including Nick Griffin, are standing in the North West.

Lets briefly envision a scenario sometime in the not too distant future. Imagine the British National Party has come to power. They would start by whitewashing what is, in their view, a stained “coffee colour” painted canvas of a country. Mixed marriage would be banned and so would any other form of racial integration. That would mean no more Leona Lewises, no more Rio Ferdinands and no more Ben Kingsleys. Existing minority groups would be constantly told that their homes do not belong to them. LGBT rights would be forgotten and women would be told to stay at home where they belong. The death penalty would be re-introduced, as would those indispensable handguns that have proved such a good idea in the US. Anyone desiring to engage in any sort of rational debate would be made pariahs in their own country irrespective of their skin colour. All this is just for starters.

Why do people join the BNP?

So who are these suited men and women passionately preaching their textbook far right views? A cursory glance through the party’s constitution suggests that these are people who wish to reclaim an identity. However, to do so they advocate a Britain of an imagined age – certainly one that ignores the social and economic realities of today. A good example of this is illustrated in the fact only 15 Caucasian “ethnic groups” that can be granted membership to the party.

The BNP seems to gain a sense of importance from believing that they are involved in “The Struggle”. That is the struggle to take back their imagined community from those viewed to be “invaders”. Such is their belief that Griffin is convinced that the party needs to prepare for a coming civil war.

The BNP rhetoric entered mainstream politics with Gordon Brown’s ill thought out “British Jobs for British Workers” spiel. The fact that the Prime Minister feels that he has to stoop to these fearful sentiments to gain support suggests that the BNP have struck a chord. At a time when unemployment is on the increase, people want a target to blame for their misfortune. Brown’s statement only served to play into the hands of the BNP, who launched a poster campaign featuring his words along with the insidious tagline, “When we say it we mean it!”, blazoned underneath.

The party thrives on the fact that no one in government is able to provide accurate immigration statistics. They latch on to the dangerous scaremongering over asylum seekers helpfully orchestrated by the right- wing tabloid press and while they refute constant allegations of racism, what party members say in speeches and print in leaflets veers dangerously close to racial discrimination. In 2008 the BNP distributed a leaflet entitled “Racism cuts both ways” in which it labelled young Muslim men as paedophiles, stating: “Wherever there are large numbers of young Muslim men, groups of them team up to lure young girls – often as young as 12 or 13 – into a nightmare world of sexual abuse, rape, beatings, drug addiction and prostitution. Some of these perverts are recently arrived ‘asylum seekers’.”

Matters of immigration and asylum seekers are arguably one of the major crutches of BNP campaigning. Many students feel that the BNP’s attitudes towards asylum seekers are extremely dangerous. According to Rick Sims, a representative from STAR (Student Action for Asylum Seekers and Refugees): “The reason why a lot of people are here, whether they’re asylum seekers, refugees or people awaiting refugee status, is that they have gone through horrible things that I would not wish to happen to anyone. As far as the BNP is concerned, they actively incite a lack of understanding and ignorance of these people and of the fact that people have always moved around.”

Yet the BNP’s appeal has undoubtedly grown in the last few years. “Unfortunately, the party get around to a lot of people, people who will never have met a politician before,” said Sims. “To me they’re not really a political party, I hate to think it but I imagine that they’ll probably get more support, especially from those looking for people to blame in the current climate.”

In recent years, the BNP have managed to significantly increase their number of council seats. With 55 local seats across Britain, as well as a seat on the Greater London Assembly, it would appear that Nick Griffin’s respectable front is helping the party to slowly make inroads. The party have had their “pure” British eyes trained intensely on the North West for some time now. Currently the party has six councillors in the region; two of them are in Pendle, Lancashire and the other four are located in Burnley. The North West is seemingly a fertile breeding ground for the BNP’s message of division; the party’s electoral successes here have come largely on the back of low voter turnout and protest votes from those disillusioned with the mainstream political parties.

While many have a right to be concerned about the activities and relative progress made by the party, it would be foolish to ignore the fact that a proportion of those who vote BNP have been made to feel that they have no alternative. The failures or perceived failures of the Government have led them to the seeminglywell-pavedroadtotheBNP.Aparallelcan be seen in the electoral success of the French Front National led by the infamous and charismatic Jean- Marie Le Pen. In the 2002 French presidential elections, Le Pen stood as a candidate, garnering 17% of the popular vote and coming second after the incumbent, Jacques Chirac. While the BNP has nowhere near this amount of electoral power, the French situation is a disturbing display of what the far right could achieve in Britain under the right (or wrong) circumstances.

Do you want the BNP to represent you in Europe?

As a preamble to its campaign for the European elections in June, the BNP confidently proclaims on their website that “now everyone in Britain can vote for the British National Party”. While most will laugh this off, some anxiously, the fact remains that these Neo-Fascists have been making noticeable electoral gains in the last couple of years – slight gains, but gains nonetheless. With the current economic stalemate slowly adding fuel to the fire lit by the BNP in the early ‘90s, it is very possible that this number will increase. If turnout for the European elections is as low as it has been in the past then this will only work to their advantage, especially when you consider the vast work and resources they have already put in to becoming more prominent in the North West.

A seat in the EU Parliament could be used as a platform from which to forge links with other dangerous far-right groups across Europe, while a presence in Europe would give Griffin and his party a position on the international stage, a position legitimised by their election in the North West of England. They only need 7.5-9% of the popular vote in order to guarantee a seat in Brussels, depending on overall turn out. Given that the BNP have tried several times before to enter the European Parliament and in the last North West EU election they received around 8% of the vote, winning this time is not as far fetched as it might sound.

Sam Tarry, Youth and Students Organizer for HOPE not hate, a campaign to expose the extremism behind the BNP told Student Direct, “Each MEP (Member of European Parliament) is not only entitled to a number of staff members in the UK and in Brussels but also has access to a £250,000 communications allowance, meaning that state funding allowances would boost the BNP’s capability in a way that would be totally unprecedented. They would be here to stay; on our TVs, through our letterboxes and in our communities, including on campus.’

Though the BNP have hijacked the St George’s flag and everything from jam making at fetes to roast beef on a Sunday, these quintessential aspects of Britishness don’t have to be associated with racism and exclusivity. However, this middle ground is being picked away; those who disagree with a racist, xenophobic and fascist party taking power need to stand up for a Britain filled with hope. Our mainstream political parties must focus on tackling the issues that the BNP have made divisive. If they ignore or underestimate them, it will be at the peril of a currently stable country.

One reason for the success of this whites-only fringe party has been the lack of participation in the democratic process and, reliant on marginal voters to win seats. It is telling that the BNP are putting their efforts into the EU elections, in which turn out is usually around 30% in contrast to the 60-70% of General Elections.

Students however have the potential to send the message loud and clear that the BNP’s politics are not welcome here in Britain or on campus, as Jonty Pryor of UMSU’s HOPE not Hate campaign reminds us: “We’re not going to be divided by this message of hate, trying to blame certain demographics within society. We need to show Nick Griffin and the fascists that we are one community and will come together against them. The one message we’re trying to spread is that we don’t want a fascist representing us and there is a real possibility of that, so get out there and vote!”