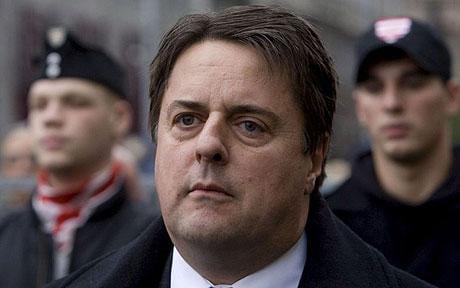 The BNP: Where next?

With the BNP back in the news recently over their earth-shaking decision to accept non-white members for the first time, it seems the perfect occasion to reflect on their progress since wining seats in last year’s European elections. You know, those vital elections that everyone turned out to vote in…No? Thought not.

Why, weren’t we all outraged when we found out the BNP had managed to get two of their number elected to the European parliament? As tragic as this was, we have no one to blame for this blip but ourselves. The fact that very few people turned out to vote in these elections (just over 30%) meant that our villains were able to slip in through the back door gaining the handful of votes they needed to gain seats. And you know the worst thing about this sorry mess? Their share of the vote actually fell from the last set of Euro elections.

Chances are, unless you take an active interest in European politics the only titbits that may have caught your attention on matters in Brussels are those fantastically entertaining YouTube videos of Tory MEP Daniel Hannon sticking it to our Gordon in his now trademark eloquence and biting wit. Or perhaps the elephantine grace of UKIP-er Nigel Farage describing Belgium as ‘pretty much a non-country’ made you laugh for a second and then lose interest in whatever else goes on politically on the continent.

As dull as European parliamentary politics may seem, things have been stirring and our beloved BNP have been very busy indeed. When they’re not engaged in announcing that boats full of illegal immigrants to Europe should be torpedoed and denouncing climate change as some kind of liberal conspiracy, they’ve been networking. They’ve been building relationships and swapping tips with other fringe parties of a similarly illustrious political hue. Worryingly, of these parties they are probably one of the mildest in tone.

However much we on campus enjoy (and god knows we do) repeating ad nauseum that the BNP are fascists and Nazis, racists and holocaust deniers, preaching this to liberal-minded students has its limits. Before I continue I should add that there is a very good reason for all this preaching; we are, after all, the good guys. But this is the thing, all this talk of them being vile racists has clearly made little odds to the people living in particular areas that voted for them and continue to vote for them. These people cannot be easily stereotyped. They can generally be tracked down to parts of the North-West, the Midlands and East London; they come from a variety of different class backgrounds, they live not only in areas deeply affected by the decline of heavy industry, like Burnley, but also in the more affluent parts of the country. Support can even be found here in South Manchester; through my own campaigning work I have encountered BNP supporters in Chorlton of all places.

Beyond their violent opposition to this country’s particular brand of multi-culturalism and their unbridled hatred of immigration they offer in their own unique, hilariously illogical and twisted way, a reaction to globalisation. In 2005, under the auspices of their dear leader Mr Griffin they underwent something of rebranding. Their General Election manifesto for that year contained a raft of new policies, some of which are geared towards ‘social justice’, protecting jobs etc (just so long as you’re white, or your ancestors were Vikings). Its just that they have no realistic solutions to any of the economic problems ailing Britain today. While many who take a cursory glance over what they seem to be offering can laugh in bemusement, there is a group who have been taken in by their ‘feel-good’ platitudes and offers of self-confidence.

With the semblance of legitimacy given to them by their presence in Europe, we will have to wait until the General Elections here to see what waits in store. While there’s no danger of them stampeding into parliament, with Nick Griffin standing for election in one of the party’s most winnable seats, chances are things will get ugly.