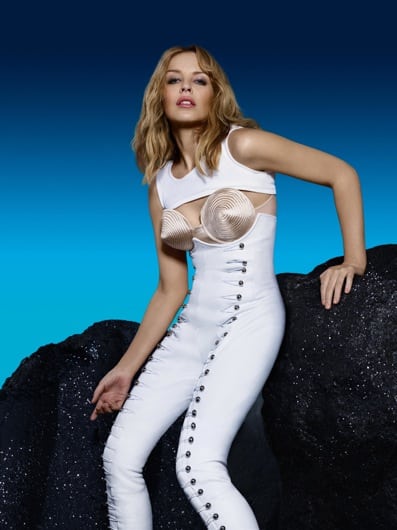 Especially for Women’s Week, Kylie Minogue talks to The Mancunion about love, recovery and her sparkling return to the dance floor.

Kylie Minogue is more than just a pop star; since her  early days in ‘Neighbours’ she has gone on to release a  string of pop classics and act in over ten films,  winning a plethora of awards and even defeating  breast cancer in the process. And that’s not just our  take on it, her achievements have been recognised by  two of the grandest dames around: Madonna wore a t-  shirt with Kylie’s face on it for the European MTV  awards, and the Queen awarded her with an OBE in  2008 for her services to music. And with good cause;  Kylie is one of the most diverse singers of our time, she  has sold over 100 million records and the longevity of  her career is a testament to her talent. Over the years  she has collaborated with a range of musicians, from  Robbie Williams, Emilíana Torrini and even Nick  Cave. With a slew of awards and accolades in her  wake, she has reinvented herself time and time again,  making her a stalwart in the fickle world of pop music.

Kylie released her eleventh album, Aphrodite, in June  2010, working with the seminal producer Stuart Price.  This is the first time Kylie has had an executive  producer, but it’s paid off, “It was just the best  experience and, funnily enough, I think it’s the most  cohesive album I’ve had since the beginning of my  career.” She also thanks her friend Jake Shears of the  Scissor Sisters for helping the album come to fruition:  “He praised Stuart highly and loves me dearly, and    basically pestered me.”

Aphrodite went straight in at number one in the UK album charts, and has been heralded as a Kylie’s ‘return to the dance floor’, but to this Kylie proudly claims, “I don’t think I ever totally left, but it is a return to form I’d say.” Price adds that it was more like she had been in the “chill-out room for a while”. Aphrodite is anything but chilled out though; there is an electric feel to the album, something new to Kylie’s repertoire. From the poppy, electro number ‘All The Lovers’ to the tenacious bubblegum pop of ‘Cupid Boy’, the album shows that Kylie and Price are definitely doing something right.

Now, onto Price’s producing technique – the man is a perfectionist to say the least: “With every song, if we weren’t having a good time, we pressed the stop button.” It’s like the old saying goes, “the record sounds like the time you had making it”. He adds “There’s a difference between having songs which you just put together and songs that you mould and craft together.”

Kylie’s attitude was a lot more cavalier, her stance being, “Let’s just blast through”, but maybe that’s because there was such a relaxed vibe in the studio. “We just sang here and it was the easiest thing.” Working with Price seems to have been a walk in the park for Kylie: “I think we’ve been connected some time before, because we just got along straight away. Thoughts about the album aside – and I’ve learnt an awful lot from working with Stuart on this project – it was just fun. He really, really made it fun for me and I felt secure.”

This is not surprising; Price has worked with the crème de la crème of the music world, and can count artists as diverse as Madonna, Missy Elliot, The Killers, New Order and Take That as work buddies. This guy knows what he’s talking about, but talk of Price’s technical expertise came to an abrupt halt when Kylie starts talking about the “highly technical device” they used to whittle down the songs to feature on the album: the white board! But obviously it wasn’t as casual as all that; Kylie adds that Price was “really determined that it was twelve tracks, forty-ish minutes. He was really quite strict.”

Price enlightens us on his vision for the album: “I think we looked for the classic album format, where can you make a record which represents your artistic intention without over-egging it, and perhaps leaving you just asking for one more…We tried not to do track + vocal = song. We said, ‘How can we take it further?  How can we make one + one = three? How can we bring this all together in a new and exciting way?’ And that meant that a lot of the songs we had were worked on to get them to a higher level.” Something which is certainly apparent when listening to the album.

A lot of love went into Aphrodite, and a lot of people too. Calvin Harris, Tim Rice-Oxley (Keane), Sebastian Ingrosso (Swedish House Mafia) and Jake Shears (Scissor Sisters) can count themselves as collaborators on the album. Kylie is, quite rightly, very proud of her latest creation. She evens goes as far as saying, “I had a little love affair with this album. I loved coming to work and I loved working with Stuart. I think that feeling comes through.”

Wow, that’s a lot of love. You’d think, with all the love in the room, Kylie would be open for talking about her love life, but she deftly avoids the question by getting philosophical: “A lot of people question why so many pop songs are about love, why operas are so written, why paintings are painted, why we cry during really silly commercials. Love in all its various forms challenges us all the time.” We are so staggered with this that all talk of relationships stops- this lady is a pro!

Maybe this kind of talk isn’t that surprising from Kylie, she says she has always been “attracted to those ethereal, starry, universal ideas”, hence touching on celestial themes in Aphrodite, something that united the album despite having many different collaborators. Price, unsurprisingly, has a lot to say on the matter: “‘Aphrodite’, ‘Cupid Boy’ and ‘Looking For An Angel’ are all songs written by combinations of different teams, but all sharing that unifying idea of the album.”

Perhaps another reason for the celestial theme is something we’ve all got in the back of our minds – Kylie’s experience with breast cancer in 2005. Kylie is not afraid to talk about it: “I think a lot of what I do now is, in some way, coloured by the experience I had with illness.” But no worries, Aphrodite is an album about triumph. Kylie explains why: “I’d written songs more about that period in my life either on or for the last album, so I didn’t feel like going through those again. This was about this moment, this time, and what a happy experience this has been for me.” Kylie’s battle with breast cancer has raised a lot of awareness. Doctors in the UK now talk about the ‘Kylie effect’, as in younger women becoming more aware of the risks and checking for the warning signs.

That period of her life is, happily, over and done with. Now Kylie is all about having a good time, and recording the album certainly does sound like it was a lot of fun. The studio had its own “designated dance zone” and the songs went through the “Dolly Parton Litmus Test”, which Kylie jokes “is soon to be soon to be trademarked and copyrighted”. This ‘Dolly Parton Litmus Test’ involved Price getting out his guitar and the pair of them belting out the song to see if it could withstand such an impromptu performance – a true mark of quality!

It’s good to see that even after over twenty years in the music business, she still has a sense of humour. Kylie gleefully talks about her last hurrah in the studio: “When it was my last day coming in here to wrap up a couple of things, I took it upon myself to get two of the cheapest, gnarliest, got-nothing-to-do-with-a-natural-fibre-at-all outfits”. And what were these outfits? Yep, cowboy and cowgirl costumes – perhaps not surprising with all the talk of Dolly Parton before. Kylie went on to say “I did a quick change at the entrance and walked in to find my ‘cowboy’ with Kenny Rogers blasting out of the stereo” so Kylie burst into a rendition of ‘All the Lovers’ with some “yeeeeehaaaaws” chucked in for good measure. Who knew Kylie could add country music to her seemingly endless list of talents?  Well, she can; according to Price “Kylie does the best Dolly Parton impersonation there is on the planet, ever!”

Are we sensing a country theme here? Maybe that’s on the horizon for the next album? Or perhaps she is saving that for her upcoming ‘Les Folies’ tour. Catch Kylie next year at the MEN Arena on the 1st, 2nd and 4th of April.