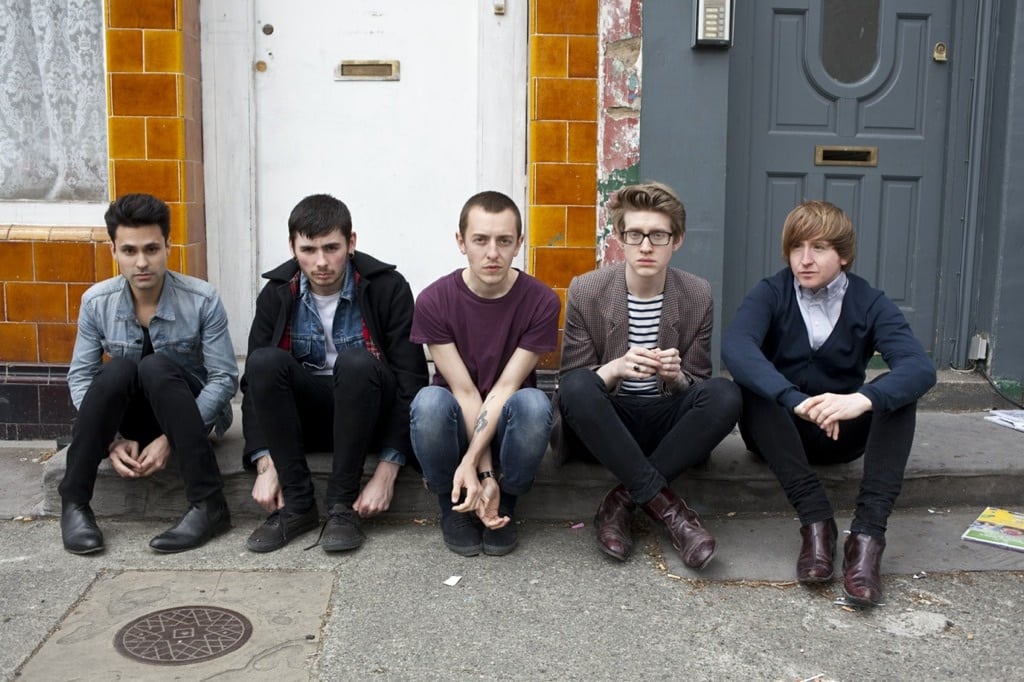 “The first time I stepped off the coach at Victoria – this was also the first time I’d also been to the city – I was greeted by a shaven-headed man, with beckoning eyes and a rolled up twenty pound note in his mouth.” Not the warmest welcome one might hope for, but nevertheless that was Rich Mitchell’s first impressions of Manchester. Still, it didn’t stop him from returning along with the rest of Chapel Club – Mitchell plays the drums – as part of the NME Radar Tour at the end of last month. Meeting backstage at Academy 3, Mitchell was joined by bassist Liam Arklie and one of two guitarists Alex Parry for our meeting. There’s enough information floating around about Chapel Club to fool the reader into knowing what to expect; five London guys, standard post-indie fare, comparisons already spanning the spectrum from Glasvegas to My Bloody Valentine; some of which the band are fond of, some of which they aren’t.

“Loveless is probably my favourite record of all time,” Parry remarks as the not-so-easy question of personally definitive albums arises. While it must be flattering to be compared to the artists behind your number one LP, it can be a source of great frustration to be slapped with lazy associations – the similarities between the band and, for example, the music press’ darlings of last year, White Lies, refuse to die. Is this a result of the uncertainty surrounding the definition of Chapel Club’s sound? Perhaps, but as it becomes ever more difficult to achieve a truly original and revolutionary sound, such comparisons are inevitable.

“Surfacing”, the 2009 track which gave the band their first taste of critical acclaim – and the wildfire nature of online hype-building – samples the octogenarian “Dream a Little Dream of Me”. Your eyes do not deceive you – the chorus takes the whimsical, lolling melody popularised in the seventies by The Mamas and The Papas and immediately transforms it into a pounding, intimidating command. “There was no thought or discussion before – the idea just appeared in the studio”, Arklie explains. A lucky strike perhaps, as the innovative use of such well-established lyrics and tune pricked more than a few ears.

There is an undeniably hypnotic quality about the onslaught of sound provided by the ringing guitars and thundering drums, especially in “Five Trees” and current single “All the Eastern Girls”, while front man and songwriter Lewis Bowman’s voice, if not a little ‘Tonight Matthew, I’m going to be Ian Curtis’, provides a more gentle, welcoming side to the dichotomy. Eager to prove the band have more tricks up their sleeves than pinching refrains from songbook standards written in the thirties, Bowman quotes “Love” from the score of Disney’s Robin Hood and Arthur Miller’s Communism-fear allegorical satire The Crucible amongst his seemingly illustrious influences and reference points.

The NME Radar Tour has given us the likes of Marina & the Diamonds, Crystal Castles and the current saviours of the Manchester music scene Hurts – how is it treating you?

“Of course, we’re really enjoying the tour. King Tut’s in Glasgow was definitely a highlight – amazing night. There have been some near misses. We were lucky to make it on stage at all in Nottingham after we were separated for press. We’re definitely looking forward to tonight though; Manchester is always a good night.”

Have you played Manchester before?

“We did the Ruby Lounge not long back, that was amazing, and the Warehouse Project as well. I didn’t take to Manchester immediately, but it’s definitely grown on me. It’s the second city for us, outside of London.”

Do you sample the nightlife in the cities you are playing?

“It depends how tired we are. We always tend to go out in Manchester because Rich’s brother lives here, but most of the time we’re too knackered. We all jump in the minivan and get the box sets out – I’m on Mad Men, Rich is on The Wire. We don’t really get out much!”

Taken aback with the speed of their ascent to being on the fingertips of every blogger worth his salt, Parry was quick to admit “if it all went horribly wrong, I’d be back at Wetherspoon’s tomorrow”; a grim yet admirably realistic view for a young, fresh and new musician to make in the current industry climate. Impressively, the band succeeded in living up to the hype when they performed live, shortly after we spoke. With the vigour, presence and command of a band with a couple of number one albums under their belts, it was a far more powerful display of their prowess and promise than their gardening tips. “Forget the salt. Best way to kill slugs is to leave a bowl of beer in the garden. They love it.” Surely, a waste of valuable beer, no? “Not if it’s the beer we get on our rider.”