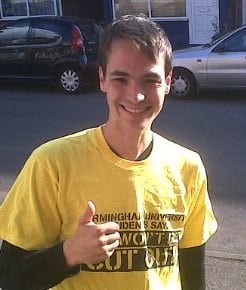 An officer at The Birmingham Guild of Students has been arrested after unfurling a banner during the Liberal Democrat party conference.

Edward Bauer, who holds the elected position of Vice President of Education, was charged with causing danger to road users while protesting against the Lib Dem conference in Birmingham last month.

Mr Bauer, 22, and two others scaled a bridge to hang a banner reading “Traitors not welcome – hate Clegg love NCAFC (National Campaign Against Fees and Cuts)”, causing debris to fall onto the road below.

The three men were held in custody, and over the weekend they faced magistrates and pleaded not guilty to the charges. The prosecution accepted that no damage or injury was caused during the incident and consequently the other two protesters were released on bail.

Mr Bauer was remanded in custody until a hearing last Monday, in which he was granted bail before his trial in late October.

This is, according to his Twitter account, Mr Bauer’s second arrest in the space of six months, and his position as Vice President of Education is under scrutiny.

The Guild of Students has been quick to distance itself from Mr Bauer’s actions. A spokesperson said, “This protest was not organised or endorsed by the University of Birmingham or its Guild of Students”. The guild’s constitution is apolitical.

The President of the Liberal Democrats Society at the University said that Mr Bauer’s actions “show his contempt for democracy and free association and bring the guild into disrepute”.

However, Alice Swift, a student who saw Mr Bauer’s protest said, “Students voted for Ed to have a voice in the debate surrounding the attack on our education. It would be a disgrace if University management were to sack an elected student representative”.