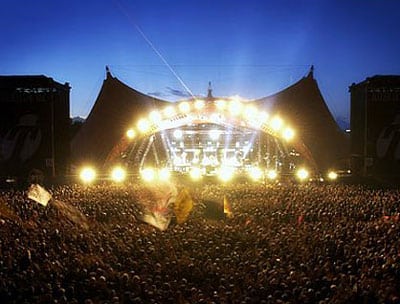 A tough one to call; The Strokes came to Beni with a lot to prove and I would go as far to say that they blew Saturday’s spectators away and Mumford & Sons brilliantly bedded new singles into their trustworthy set. But Arcade Fire pipped them both, by providing the most serene ending to a fantastic week, showcasing The Suburbs in all its glorious beauty.

Elbow. The Mancunian old-timers have been hitting the high notes for so long, but looked out of their depth on the main stage. Desperate attempts to encourage crowd participation fell on deaf ears and failed to disguise an embarrassingly mediocre back-catalogue.

Tame Impala. The latest in a recent surge of burgeoning Australian talent, this psychedelic quartet stomped a bass-ridden beat across the east coast of Spain. Arriving on the main stage early on the Saturday evening, Tame Impala wonderfully exhibited the much applauded debut album Innerspeaker, most notably the funk filled ‘Solitude is Bliss’.

Possibly the only downside of Benicassim must be the number of shaven-headed, union-jack clad morons you have to feast your eyes upon each morning. In spite of this, the masses were hugely friendly and the venue’s locality to the Mediterranean provided a great way to spend your hungover daytime.

The leading four-day festival has never failed to draw some of the biggest headliners since its inception in 1995. With a week in the sun and four days of music for the same price as 3 days in the English rain, Benicassim must be seen as one of the best value-for-money festivals going.