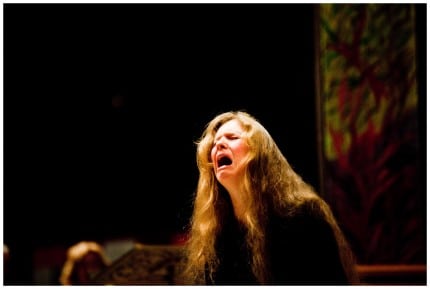 It was with definite stammering and hesitation that I evasively explained to my ‘plus one’ we were going to a show – about? Ah. Clearly should have based my opinion on more than just ‘Nuns, Italy, and the sixteenth century’. They have live music I said, and actors, I think. I prayed in the bathroom. Let it be good, Oh god, let it be good.

It was more than good, it was superb. ‘Sacred Hearts’ tells the story of the convent of Santa Caterina, at its core sixteen year old Serafina, who pounds and cries against her cell doors as she is imprisoned in her new convent life. Yet this is not a solo piece – for constantly in the background of our main players are the women, and the life of the convent – and it is for this coming of despair, and condemnation, and the banal, and the divine that the show really deserved its encore.

Sarah Dunant, the writer herself, and Deborah Findlay acted beautifully as did the singers of Music Secreta. Niamh Cusak very intensely, perhaps slightly affectedly starred too. However, I venture that it was the group’s so wonderful singing, in the truly atmospheric Manchester Cathedral, that really made you feel, there was something sacred in the air.