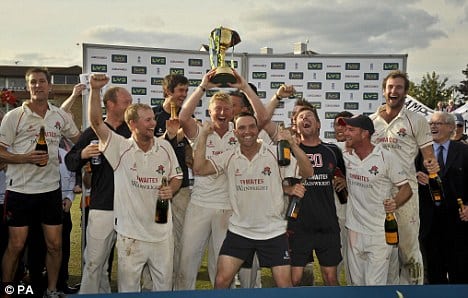 When Lancashire last lifted cricket’s County Championship way back in 1934 Franklin Roosevelt held the presidency of the United States, George V was the King of England and Adolf Hitler became Germany’s head of state.

Fast forward to 2011 and whilst Das Fuhrer is long gone Lancashire are celebrating being crowned as County Champions once more.

Victory over Somerset in the final session of the season’s final day saw Lancashire finally end a 77 year title drought, lifting a hoodoo many thought would cling to the County forever.

Throughout the last 77 years Lancashire’s squads have been littered with stars, from the home-grown likes of Pilling, Lever, Allott, Fairbrother, Atherton, and Flintoff – to overseas imports Engineer, Lloyd, Akram, Muralitharan, Law and Hooper.

Yet for all the one-day successes and trophies Lancashire’s stars achieved – plus a shared Championship with Surrey in 1950 – none of these illustrious names could ever call themselves County Champions. Lancashire, it seemed, were destined to be forever the bridesmaids.

This year however, everything fell into place. Playing away from their Old Trafford home – which is currently under major redevelopment – Lancashire won ten and drew two of their 16 games, pipping Warwickshire at the last.

There is a brilliant irony in that – on paper at least – it was one of Lancashire’s least glamorous sides which finally broke through the 77 year wall. The team which beat Somerset on the closing day boasted only a single International cap – and a large contingent of the young squad hail locally, from Blackpool to Chorley and Bury to Preston- a lack of heavyweight names which seemed to benefit rather than burden the side.

It was also a vindication of a policy of promoting youth – a policy which Lancashire, hamstrung by finances in a year in which legal fees nearly bankrupted the club – were somewhat forced into. Unable to afford an overseas professional after Farveez Maharoof departed to join the Sri Lanka squad they promoted a string of home-grown players and reaped the rewards – perhaps a lesson for other counties in the financially restricted arena of domestic cricket.

Throughout the season there were a number of standout performances. But for all the sporadic moments of individual brilliance – whether it was Gary Keedy’s haul of 60 wickets at an average of 23, Kyle Hogg’s 50 wickets and vital lower order runs, Simon Kerrigan’s 9-51 against Hampshire which kept Lancastrian dreams alive or Glenn Chapple steaming into bowl against Somerset despite a torn hamstring – this was a team victory.

It was arguably no coincidence that Lancashire finally won the title in the year they were playing away from Old Trafford. Historically haunted by the Mancunian weather Lancashire thrived at their temporary home at Aigburth, Liverpool, where the wickets provided lent themselves to results rather than drawn matches.

Next year, Lancashire return to their famous old ground- and somewhere in the grand pavilion the Championship pennant will proudly hang once again.

How long they’ll have to wait for another title remains to be seen, but it’s doubtful Lancashire fans will be suffering until 2088.