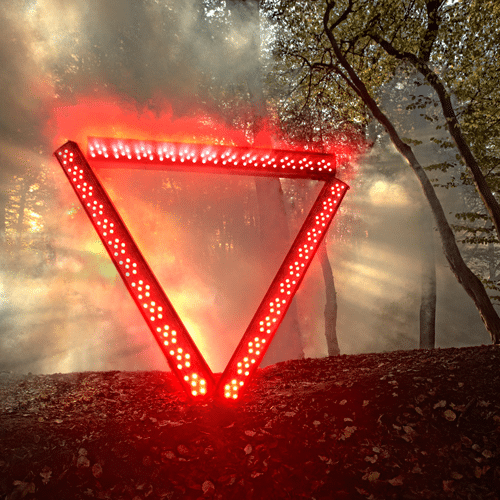 Electronic metalcore? Post-hardcore electronica? Electronicore? As much as people argue about defining St Albans outfit Enter Shikari, more people should be focused on their new release A Flash Flood of Colour which brings a completely different sound, compared with 2007’s Take to the Skies and 2009’s Common Dreads, with even more outspoken political views reminiscent of The King Blues.

The album opens with ‘System…//…Meltdown’ which has a similar sound to the 2010 single ‘Destabilise’ but is in a completely different vein to their last two albums. Arguably, ‘Gandhi, Mate Gandhi’ is the most diverse song on the album and the most memorable, possibly because of its obscurity, with a break in lead vocalist Rou’s rant, where someone just says “Gandhi Mate, Remember Gandhi (Jesus, just remember)”. The album closer, ‘Constellations’, is very similar to ‘Adieu’ from their first release Take to the Skies, starting simply with a poetic feel with Rou’s distinctive voice.

However, while this album does take Enter Shikari in a new direction, the album seems to have lost flow compared to Take to the Skies which had numerous reprises that made each song flow into one another. Also, with the songs ‘Quelle Surprise’ and ‘Destabilise’ being released and hyped up before the album’s release, it seems stupid that neither are featured on the album.

A Flash Flood of Colour is a good album but those who prefer the older Enter Shikari and dislike lyrics of a political nature may be left disappointed. However, this album shows that Enter Shikari are not afraid to change their style and that this album, while slightly disappointing compared to its hype, shows great future for the band.