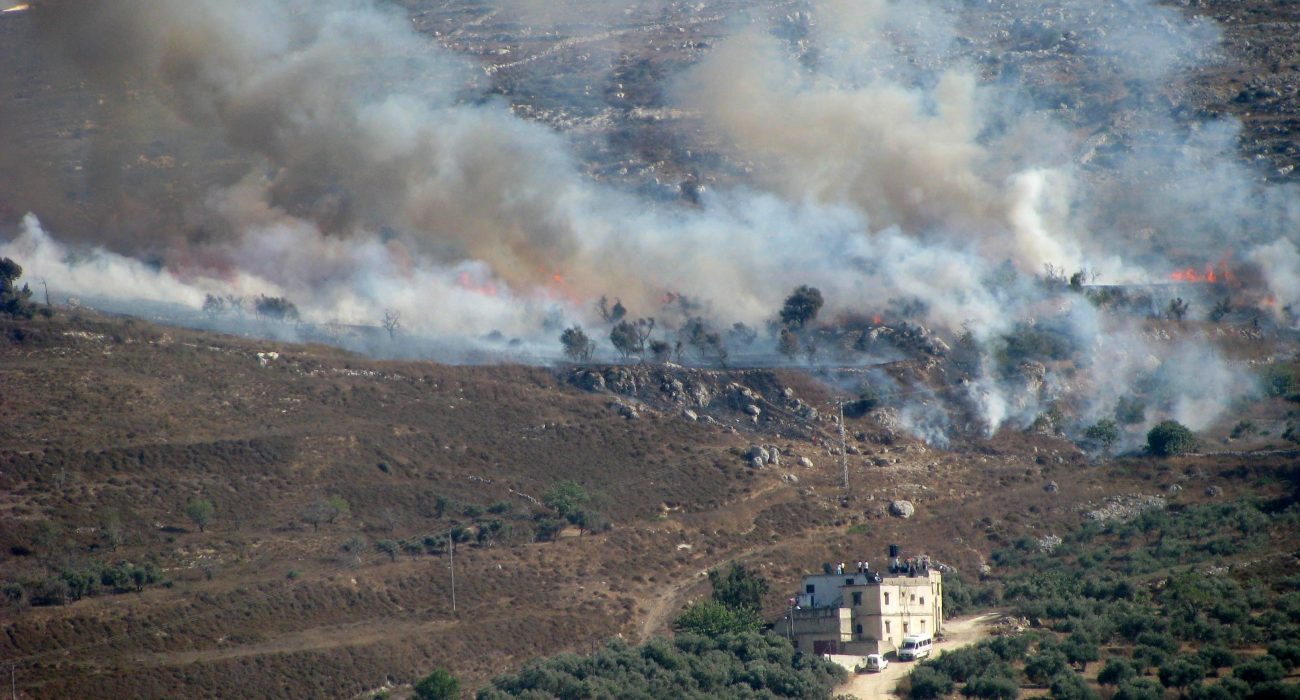 This photo of the Sofan family home shows olive trees on the family's land burning as a result of an arson attack by settlers. In 2011 alone settler attacks in Burin caused damage to 1,850 olive trees, 100 almond trees, 3 cars and resulted in the injury of 36 Palestinians. Trailers from Yitzhar settlement can be seen in the top right corner of the photo.

At 28 years old, Amjad Sofan feels he has missed the train of education and, at this point in his life, will not be able to catch it again.

Amjad is the second oldest son of the Sofan family, one of the families most terrorized by Israeli settler violence in the West Bank. The Sofan family lives in a farm house on an isolated hill far from the rest of the houses in their village of Burin, and earns their living from agriculture. Despite the beautiful landscape that surrounds them, Amjad and his family have never lived in peace as the settlers from the illegal Israeli settlement of Yitzhar, which sits just a few dozen meters from the family home at the top of the hill, frequently harass them and have launched a series of violent attacks on them over the years.

The settlers of Yitzhar, which was first established in 1982, the same year that Amjad was born, are some of the most violent settlers and have attacked Burin and the surrounding villages over the years damaging buildings, cutting olive trees and injuring villagers.  In the midst of unending harassment, Amjad finds the burdens of the family laid on him with no help from the Palestinian police or the Israeli Army.

In July 2002 while Amjad was a second year student at An-Najah University in Nablus, Israeli settlers came down to the Sofan home and set it on fire.  Amjad was not present at the time of the attack because although the university is only fifteen minutes away from Burin, Amjad had had to take a dorm in Nablus.  During that time, the road between Nablus and Burin was effectively closed by an Israeli military checkpoint and travelling between Nablus and the surrounding villages meant dangerous hours-long treks over mountains.

The attack on the family home was so terrifying and traumatic, Amjad’s father suffered a heart attack and died days later. Being the only source of income and the backbone of the family, his father’s death meant that Amjad had to step in to take care of his family at that difficult time. He dropped out of school as he couldn’t afford the tuition and started working on the family’s farm. He has stayed with his family since then because he is the only man in the house and the only one who could offer protection for his mother and younger siblings in case of a sudden attack.

Since 2002, settler attacks have only intensified.  In 2004 settlers set their home on fire yet again and then surrounded the house, armed with dogs and knives.  In addition to the terrifying attacks on their home, which is now ringed with barbed wire to protect against settlers trying to enter the home, even the olive trees the Sofan family raises on their private land and from which they make their living from have been the object of attacks.   Settlers have chopped many of them down and burned others, and due to the risk of violence the family faces by getting too close to the settlement, the settlers prevent the Sofans from picking the olives to earn their living. The family needs permission from the Israeli forces to reach their trees and pick them under army’s supervision.

Amjad thought at first that he would only have to work for a short time to support his family, and then return to his education. He tried doing so in 2005 but dropped a year later due to bad grades and financial problems. He found it hard and not worth it to return to school as his family relied on his financial support and couldn’t afford university even as a future investment. Now he does not think of going back to school as he sees himself as being too old and has more responsibilities than ever before. He can barely manage earning income for himself and his family in the first place, with the ever increasing pressure on the village from Israeli forces and settlers that restrict the job opportunities for the villagers with problems of transportation around the West Bank and attacks that prevent them from tending their land.

Amjad has lost his right to enjoy an education that would have offered him better opportunities in life and allowed him to follow his ambitions. He finds himself now struggling to make ends meet and while he remains steadfast in his commitment to not abandon the family land, he has lost the hope of ever truly enjoying his right to education.