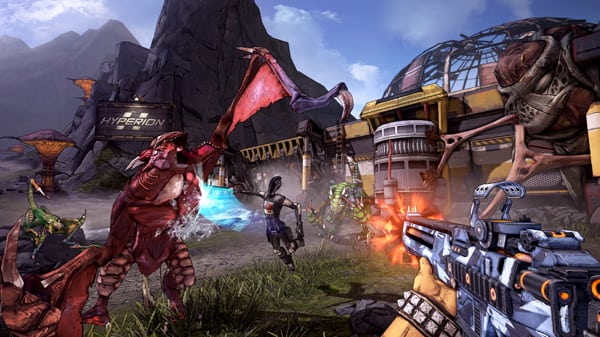 There are a lot of enemies that need killing in Borderlands 2. From the wide variety of dangerous beasties, to the vicious locals, to the private robot army of one amusing jerk known as Handsome Jack, there is no shortage of things wanting Vault Hunters dead. It’s good, then, that there are so very many guns to kill them with. 87 bazillion of them, if the developers at Gearbox are to be believed.

Borderlands 2 is a well-worked fusion of shooting, looting, role playing and co-operative play. All the pick-ups are procedurally generated, ensuring that you will almost never find two items the same. The compulsive need to scour every area, just in case, one chest contains an extremely rare weapon becomes powerful fast.

As well as a meaty and entertaining main story, Borderlands 2 packs a healthy proportion of side quests to be tracked down and completed for extra XP and potentially rare loot. Earning XP helps your character progress along the skill tree, allowing them to choose from a wide range of new abilities. Each of the four character classes has their own unique action skill and skill tree to match. For example, the slightly mad Gunzerker can temporarily duel wield any two guns and go on a spree, whereas the more reserved Commando can deploy a powerful turret.

For maximum fun, Borderlands 2 should be played with a group of friends either online or locally. Roaming around the visually impressive landscape of Pandora in a heavy duty vehicle running over and/or shooting every living thing is much more satisfying if you’ve got a friend or three to share the road.

Borderlands 2 is a proper sequel that never takes itself too seriously and vastly improves on its predecessor. It has more guns, more environments, more enemies, more laughs. Put simply, it has more.