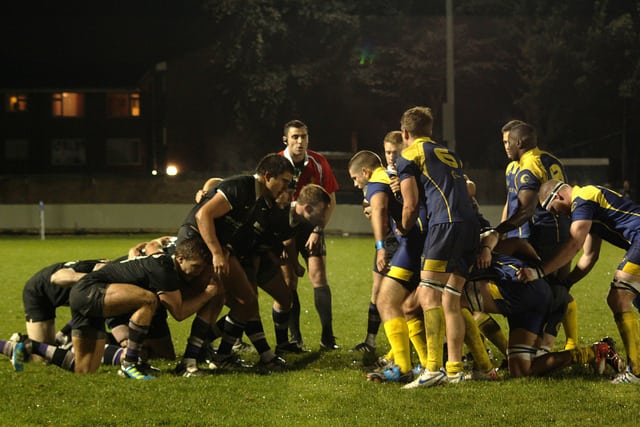 The University of Manchester men’s first team claimed this year’s Varsity bragging rights with a hard fought 22-7 win over Manchester Metropolitan.  At a very wet and windy Heywood Road, the first half was an attritional affair, with a lot of hard tackling and impressive defence. Free-flowing rugby was sadly lacking, as both teams struggled to create much in the opening exchanges.

It was UoM who drew first blood, Owen Waldin putting his side ahead with a penalty in the fifteenth minute. But that was as good as things got for them in the first half, as Man Met started to dominate the game, spending long periods camped in their opposition’s 22. The pressure finally told when, after a messy scrum, they touched down in the corner. This put Man Met 7-3 up, a lead which they deservedly held until the half time interval.

UoM showed little in the way of attacking ideas in the first half, however that quickly changed after the restart. A sustained period of pressure led to three quick penalties, all of which were slotted over by the impressive Waldin.

Then came by far the best attacking move of the match. A slick passing sequence ended with UoM’s Joe Heslop evading four tackles to score his team’s first try of the match. Waldin duly converted to give UoM a 19-7 lead with twenty minutes left on the clock. Any thoughts of a Man Met fightback were dealt a further blow in the sixty-third minute, as a drop goal put UoM fifteen points clear with just seventeen minutes remaining.

In truth the game somewhat fizzled out as a contest at this point, with Man Met never seriously threatening the try which would have made for a nervy finish. For the last ten minutes the crowd were more interested in the exploits of the numerous streakers than the action on the pitch, as UoM defended solidly to close out a deserved win.

After the game University of Manchester captain Peter Rowe said that he felt his side deserved the win.

“We really had to dig deep for that and we deserved it. The first half we started badly, second half we really kicked on and I’m really proud of the boys,” he said.

The win provides a perfect start to the season for the University of Manchester, while Man Met will also feel they showed enough in the first half of the game to merit optimism for the season ahead.