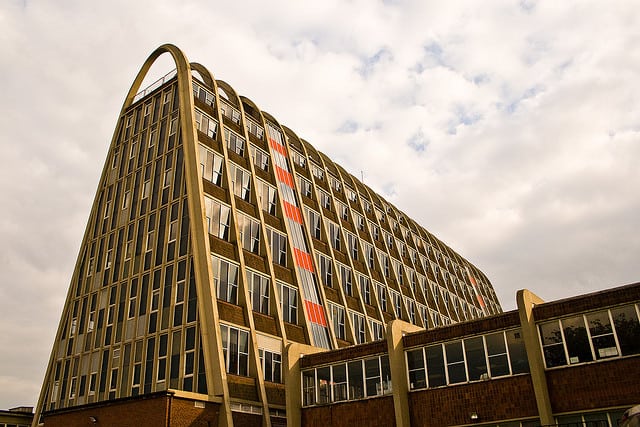 The iconic building has been part of Manchester's landscape for 52 years. Photo: Anthony Wilkins

End in sight for ‘Toast Rack’

Manchester Metropolitan University’s famous “Toast Rack” building is set to be left vacant as the University moves to its new campus.

This year will be the last that the iconic Hollings Faculty is used by over 3,500 Fashion, Food and Hospitality students, and next year the new £139 million Birley Fields campus in Hulme will be used instead.

The move is part of MMU’s ten year plan to consolidate from seven campus locations to two, in central Manchester and Cheshire, by 2014.

Built in 1960, the Grade Two listed building was designed by L. C. Howitt, who also designed the Manchester Crown Courts of Justice and Blackley Crematorium.

Student opinion on the building seemed mixed. Emily, a final year Fashion Marketing student, said: “I don’t like it. It’s a bit decrepit and run-down.”

Her friend Sam, in the same year and course, said: “It’s really famous, even my grandparents know it. It is drafty though and we sometimes get rained on in lectures because it leaks. Even the lecturer got wet once.”

Asked about the move to the new campus Sofia, a second year Hospitality student, said that she was “excited about the new facilities”.

But Esme, a second year Fashion Design student, said: “I like having our own area for Fashion and having been here two years the move next year will be disruptive.

“We chose a house in this area, I like it. Oxford Road seems really busy.”

The Manchester Modernist Society, which describes itself as “a small band of urban enthusiasts”, has been allowed into the building this year to document its history.

They will select the top 52 items which they find in the building, one for each year since its construction, and archive them in an online “museum”.

Project manager Haleh Moravej, also senior lecturer in applied nutrition at MMU, said that the aim was “to create a visual digital narrative and for staff and students to celebrate the building by getting to know how it all started and by whom and how.

“[This] is a one-off life opportunity not to be missed.”

An MMU spokesperson said that it the future of the building was currently “undecided”.