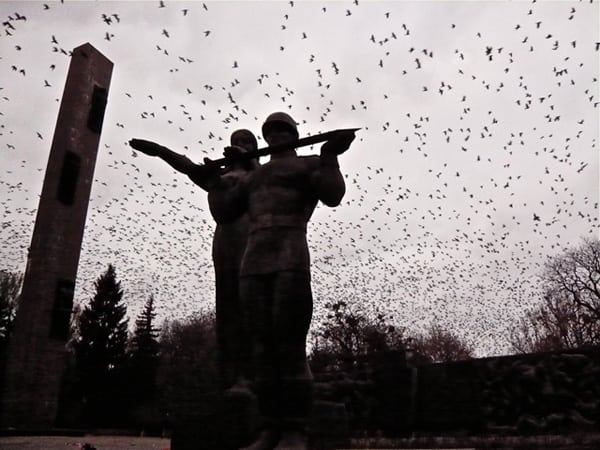 Winners have been announced for a contest featuring photographs taken by University of Manchester researchers.

The ‘Images of Research’ competition asked for images showing how research affects the wider world, and fifteen shortlisted finalists were displayed online and at the Deansgate John Rylands Library.

The winning photo, named “Borders Beyond Borders”, was taken by Benjamin Tallis, a PhD researcher looking at how borders in the Eastern region of the European Union relate to a nation’s identity.

He said: “This is a great boost for my research, both in raising the profile of the issues it deals with and in confirming that it is of interest to people.”

The image was captured at a Soviet war memorial in Lviv, Ukraine at a moment when hundreds of birds erupted from the trees and filled the sky.

Runners-up included an image of hands covered in UV paint showing bacteria thriving on them, and a computer generated photo of a 305-million-year-old arachnid.

Mr Tallis, who has previously had his photography exhibited in Didsbury, said that he has “been into photography for a long time.”

“I thought that the competition was a very good initiative, providing a way of promoting visual research as a way of understanding the world,” he continued.

He believes that measuring the “impact” of research shouldn’t be about putting it into economic practice but about making it more accessible to the public.

The photo was taken on a cold December day after a visit to the monument.

He said: “As I was about to leave, I heard an amazing sound: thousands of starlings exploding out of the trees behind the monument, streaking the sky in swirling black swarms.

“It was one of those moments where you fill up with feeling and emotion but it’s really just a wonderful time.”

He managed to compose himself long enough to take the photo in what he described as “an instant reaction,” hoping that he “would do justice to what was an amazing moment.”

Asked about his future plans he said: “Whatever I do I know that I’ll continue to take photos, I get plenty of moments of inspiration.”

Mr Tallis won a £200 Amazon voucher for his winning entry, chosen by a public vote.