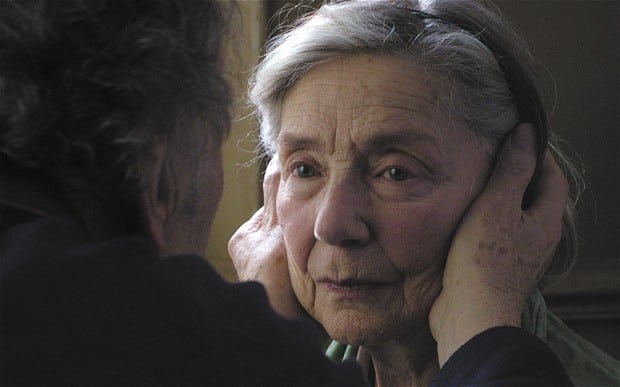 Michael Haneke has made a name for himself with hopeless, despairing films such as the fourth-wall-breaking torture fest Funny Games (2008) and World War I drama, The White Ribbon (2009). Amour, like The White Ribbon, won the Palme d’Or, in its respective year, and with good reason. Amour is a crushingly bleak but beautiful tale of an elderly Parisian couple and their struggle through their final years.

Georges (Jean-Louis Trintignant) and Anne (Emmanuelle Riva) live with a fair amount of comfort and happiness in a Paris apartment until one day Anne suffers a stroke. Georges tries his best to care for the now semi-paralysed and slowly deteriorating Anne, never once complaining about his wife’s tragic situation. Anne begins to show signs of improvement before another stroke leaves her bed-ridden and incomprehensible. Never even allowing the idea of sending her away to a home to enter his mind, Georges is forced to watch as his wife dies slowly in front of him.

One may be inclined to think that a film entitled Amour would have some sort of clichéd, sugar-coated “love conquers all” message but Haneke is far too melancholic for that. In fact, Amour feels far more like a horror movie than one could reasonably expect. One particularly effective dream sequence has Georges walking through the eerily waterlogged, dilapidated halls of his apartment building while the camera follows him around blind corners, much like it does for Danny’s tricycle rides in The Shining (1980). Amour effectively shows how terrifying growing old can really be.