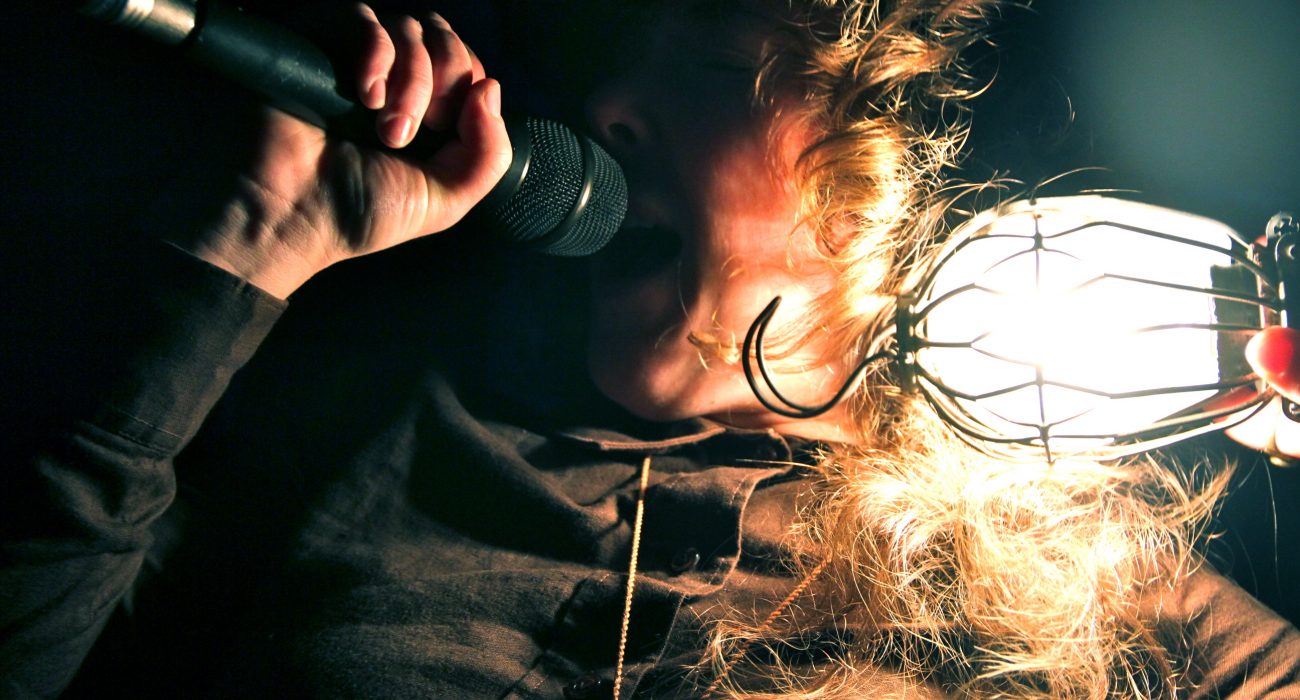 The Canadian duo Purity Ring debut album ‘Shrines’ is without a doubt a masterpiece. With its brilliant combination of pop sensibilities, pitch shifted vocals and mysterious tone it grabs the listener drawing them into a journey through its shadowy catacombs and mysterious covens and after its brief thirty eight minutes it thrusts the startled listener back into daylight wanting more. After receiving a huge amount of critical acclaim Megan James and Corin Roddick have taken the album on a huge international tour and during their brief stay in Manchester they found time to speak to The Mancunion.

They seemed to enjoying the hectic schedule with Corin saying, “There’s a lot of places on this tour where we haven’t been before. We’ve been overseas once or twice but just short little bits and this time were doing a whole European and UK tour. So it’s like the real deal!” With so many live dates it’s a wonder that they haven’t felt overwhelmed by the whole experience. With shows lined up well into the new year it’s a surprise that they’ve been able to find any time to themselves but as Corin explained, “We always have enough time, we have a month on and a month off, so it’s not too bad”.

With the huge amount of critical success its undeniable that a lot of people will have been newly introduced to their music. However, with such a unique style it is very hard to classify them into a genre but the band seems more than happy to let the music speak for its self. “We’re just trying to make our music,” Corin clarifies, his band mate Megan adds “We make whatever comes out of us”.

The bands devotion to their music is undeniable and despite coming from Edmonton they now live quite far away from each other and this had a huge impact on the way that the tracks on the album were formed, working on the each piece separately they would both develop their own parts and only really getting together to record, as Corin describes, ”the process would work like I would write a track and send it to Megan and we’d send it back and forth while Megan is working on the vocals. Sometimes when we do that we do a couple of tracks at a time but most of the process is done apart.”

A lot of the bands lyrics are inspired by witchcraft and the human anatomy. This is one of the many things that sets them apart from a lot of other musicians around at the moment however the inspiration for these lyrics seems very hard to pin down. As Megan, the primary lyricist for the band acknowledged, “I don’t know where it comes from. I’m obviously taken by a lot of those topics and that’s the reason I write about them but I can’t say it’s from a particular book or artist. It’s just me.”

Another thing that seems to really set the band apart is their DIY approach to their sound and style. During their live shows, Corin uses a custom built tree like instrument to drive both sound and lighting and they both wear custom clothes and jewellery designed by Megan. As Megan illuminates  “I think that’s naturally how we’re comfortable presenting music. We’ve been to a lot of shows ourselves conscious of how we want to present our own show and that ties in with how we’ve always done shows. And that is doing a lot of it ourselves and making sure that we’re always the head of what it looks like and what it is artistically. It’s really important for us.”

When asked what advice they could give to new acts, this point was stressed by Corin. “Be careful. When people start becoming interested in the music you make, it’s pretty easy to have things taken away from you. It’s something you have to be pretty on top of if you want things to stay in your own realm.”

This devotion to all of the aspects to their performance really shows through in everything that they do yet more recently the band released a music video to their song ‘Lofticries’ which was directed by A G Rojas. The band seems to have quite enjoyed another creative mind bringing their own take on the Purity Ring experience, “He did a really good job on it” as Megan describes, “He didn’t take the song for what it necessarily was about, he just took what he felt from it and made what he wanted. It was really nice.”  While they seemed to have enjoyed working with someone else briefly they noted that there were no immediate plans to work with Rojas again.

Purity Rings debut album ‘Shrines’ is out now on 4AD and Last Gang records, check out http://purityringsongs.com/ for more details