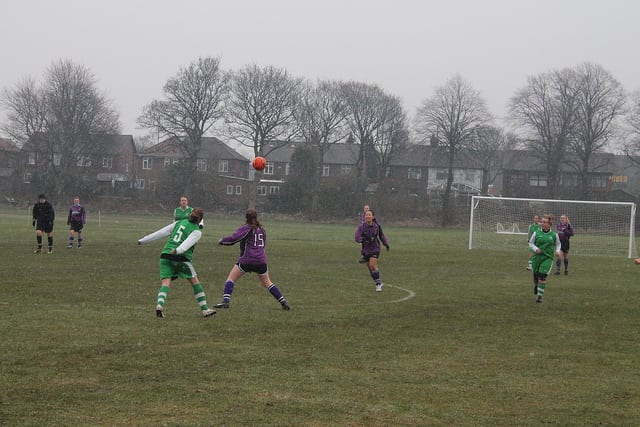 The awful weather couldn’t stop Manchester Women’s 1st from putting on an impressive home attacking display in which they ran out 4-0 winners over Liverpool at the Armitage centre. Despite a handful of speculative shots from range, Liverpool never really threatened Manchester’s goal, indeed they did not win a corner all game.

On the few occasions they did threaten, Manchester’s defence held firm, which must be pleasing for the coach. In contrast Liverpool were terrorised throughout by Manchester who dominated possession and ruthlessly exploited their opponents frailties, in particular Liverpool could simply not live Mapp, my player of the match, and the industrious winger Thomas, who operated on the left wing impressively all game. However credit must also be given to Liverpool’s keeper whose remarkable saves kept the score down, unfortunately she sustained an injury which forced the game to be stopped 15 minutes before time.

Oddly enough, Liverpool threatened first in this game, with a shot from distance that forced Manchester’s keeper into a smart stop with only 2 minutes gone. However a mere 8 minutes later Manchester celebrated their first goal after winning a series of corners. A neat one-two between the impressive Thomas and Manchester’s lone striker Wan on the edge of the box put the former through on goal and she coolly slotted the ball home.

Manchester continued to dominate possession and on 15 minutes Liverpool’s keeper kept her team in the game, producing a flying save to push out Mapp’s effort from the edge of the box. The keeper then made a heroic double save on 20 minutes, after saving a powerful effort from Williams she made herself big to deny Mapp once more on the follow up. Thus despite winning a number of corners, dominating possession and peppering Liverpool’s goal Manchester somehow left the field at half time only 1-0 up.

The second half started much like the first, with an effort from range by Liverpool that must have made the players believe they could threaten. However it did not take long for Manchester to reassert their dominance and on 55 minutes Liverpool’s keeper came to the rescue again, although in less convincing fashion, as she fumbled another Mapp shot onto the post.

Only 5 minutes later Manchester finally made their dominance count as they scored their second goal. The impressive Mapp was given the time and space to deliver a fine through ball which put Williams through on the right and she gleefully smashed the ball high into the net. It didn’t take long for Mapp to finally get on the score sheet herself with a fine individual effort, after drifting past two players she struck a powerful shot from range high into the net that the keeper couldn’t, for once, handle.

The onslaught was completed by the talented Mapp who didn’t have to wait long for her second on 67 minutes; she placed a shot into the bottom corner after being played in by a wayward Liverpool header. Unfortunately the game had to be abandoned on 75 minutes, Liverpool’s keeper could no longer continue due to a shoulder injury picked up after a clash on the goal line.

This performance and of course the result must give Manchester a real lift, providing key players remain fit there is no reason why the team cannot continue to churn out these results week in week out.