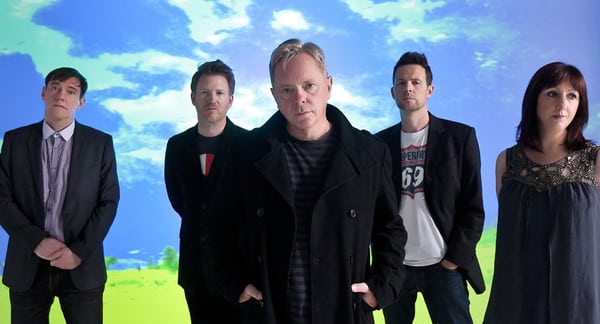 “It was pretty nerve-wracking – playing your hometown usually is – but I’d always, always wanted to play there. I’ve seen so many great gigs there down the years.”

Tom Chapman is recalling last year’s two-night stand at the Apollo with New Order, for whom he’s now playing bass after Peter Hook’s acrimonious departure back in 2007. The shows came as part of an exhaustive touring schedule that the band have undertaken since reforming in late 2011, with Bad Lieutenant – the group launched in the interim by Bernard Sumner and Stephen Morris – being put on hold.

“It was really just pure luck,” says Chapman of his introduction to New Order. “Myself and (guitarist) Phil Cunningham have a mutual friend, and they told me that Bad Lieutenant might end up needing a new bass player, because it wasn’t working out with Alex James, who was based down south and starting to play with Blur again. As soon as it was clear that Alex was going to have to bow out, I got a phone call, went to audition and the rest is history, I suppose. The thing is, when you meet other musicians for the first time, it either works or it doesn’t. I clicked with the guys straight away, and we found ourselves very much on the same wavelength, musically speaking.”

The decision to revive New Order was effectively forced by circumstance, with Chapman insisting that the kind of lengthy tours that they went on to play were never on the table to begin with. “There was never any masterplan to reform,” he says. “We got a call from a long-time friend of the band called Michael Shamberg, who was involved with directing a lot of New Order music videos back in the eighties. He’s quite ill, and he’s been living in the States, where he needs money to pay for his treatment. He asked if we could do something to help with his medical bills, so we basically decided to do two concerts; one in Brussels, and one in Paris.”

“No word of a lie, that was genuinely all we ever intended to do as New Order. We just didn’t know how it was going to be received, especially with me involved on bass. It went really well, well enough that we started to get offers coming in that snowballed, and before we knew it, we were on this world tour, that’s still ongoing. But there was never any intention to be focusing mainly on this, to be leaving Bad Lieutenant on the back burner.”

The early shows served as a baptism of fire for Chapman, who admits to having wrestled with nerves as the New Order machine began to whir into motion again. “I was quite confident in the respect that I knew I was a good enough bass player,” he says,  “but I’d be a liar if I said I thought I’d be able to breeze in and have it all be a complete walk in the park. I think I managed to harness some of that nervous energy, and I do play those basslines like I wrote them. I try to respect the originals as much as possible, but I want to inject some of my own personality into them as well. I’m certainly not a session player, which is what a lot of people seem to assume.”

With such an impressive back catalogue to choose from – even if a certain, now-defunct local venue saw to it that it never made the band much money – you have to assume that compiling a setlist is something of an exact science. “It’s always going to be at least seventy percent made up of the songs that the public want to hear,” says Chapman. “It has to be that way because it’s not going to go down particularly well if we suddenly decide we’re going to drop ‘True Faith’ or ‘Blue Monday’. The other thirty percent is where we get to play around with what we fancy doing ourselves, whether it’s songs from old albums that haven’t been played before or some of the more recent stuff; we’ve just started playing ‘I’ll Stay with You’ from (2013 compilation) Lost Sirens, for example.”

“The records we’ve got at our disposal to delve into just give us incredible scope for the gigs. Plus, I know it’s always important to Bernard, Steve and Gillian (Gilbert, keyboardist) to put some Joy Division stuff in there. If you’ve got the opportunity to finish your set with ‘Love Will Tear Us Apart’, then you do it. There’s just no way you can leave it out.”

Lost Sirens was made up entirely of unused material from sessions for the last New Order studio album with Peter Hook, 2005’s Waiting for the Siren’s Call. Chapman confirmed, though, that the current lineup are set to record tracks of their own. “We went straight back into the studio when we got back from the US tour last year. We had ideas for at least six or seven new songs, and we worked with Tom Rowlands from The Chemical Brothers for a little bit, so it’s all happening. I can’t say much more, other than watch this space.”

Given the messy nature of Hook’s exit from the band – he subtly told The Guardian that “Bernard’s a twat, and he always has been” – it was never likely that he was going to keep his opinions to himself when the reunion was announced, and he has indeed had plenty to say, including claims last year that Chapman had been miming to his bass parts. “You know, the best advice I had on that was actually from Bernard. He was under no illusions how much criticism I was going to come in for, but basically said that I needed to ignore the reactions – good and bad. As long as I feel like I’m doing a good job, that’s all I need to worry about. I don’t think I’ve ever paid attention to any of that shit. It’s just complete bollocks, petty stuff in the press that’s got nothing to do with music. I’m just not interested.”

Chapman had been making music in Manchester for a good while before New Order ever came calling; his understanding of, and admiration for, the city’s music scene means that the importance of playing in one of its greatest exports is certainly not lost on him. “I’ve spent a long time here as a local musician. I was born and grew up in France, but I moved here a long time ago with the specific goal of pursuing music. It’s just been so consistent musically, and there’s a real continuity here; we’ve still got the lies of Doves, Elbow and I Am Kloot making incredible records today. When you’re lucky enough to travel around the world and see how different musicians operate in different environments, you realise that Manchester is genuinely one of the great cities to make music in; it’s such a hospitable environment for young bands. I don’t think that’ll ever change.”

Next month, the band will headline at one of the most exciting new outdoor venues in the country; they’ll play in the shadow of the giant Lovell Telescope at the university-owned Jodrell Bank Observatory, with another local legend, Johnny Marr, also on the bill. “We were actually asked to do it last year, but we couldn’t make it work, schedule-wise,” reveals Chapman. “Obviously, we were really keen to come back and make it happen this summer, and we’ve managed to put together a lineup we’re really pleased with, especially with Johnny playing. We actually just had a meeting yesterday about what we’ve got planned (previous performances have involved spectacular projections onto the telescope). I don’t really want to give the game away, but it’s going to be special. I think it’s the sort of place that has a lot of resonance for anyone who’s grown up around here. I just hope it doesn’t piss it down!”