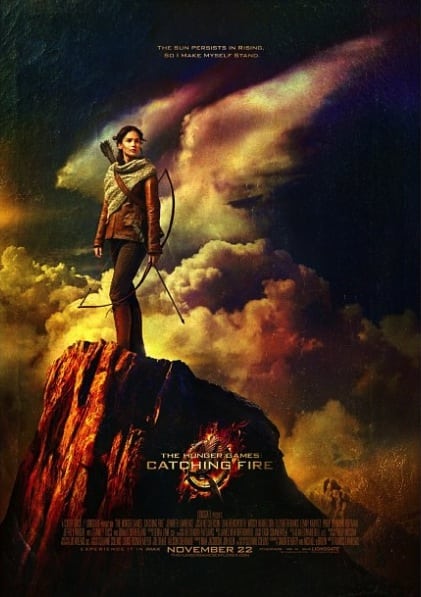 The “star-crossed lovers of District 12” find themselves back in the battling arena only a year after winning the Hunger Games in one of 2013’s most anticipated releases. Hollywood’s sweetheart Jennifer Lawrence (fresh from her Oscar win) returns as Katniss Everdeen, The Girl on Fire, who yet again has to escape the clutches of the Capitol alongside Peeta, played by Josh Hutcherson. This time around, all previous victors are rounded up to fight to their deaths (a devious plan hatched by the malicious President Snow). What’s more, she has to confront her attraction to lifelong companion Gale (Liam Hemsworth) all the while being pressured by her foes to keep up the farce of being devoted to Peeta.

Its predecessor earned a place amongst the 20 highest grossing films of all time, and broke a fair number of other box office records along the way. Adapted from Suzanne Collins’ book series, the plot centres around 24 children that are drafted from districts all around a post-American land called Panem every year and are forced to kill till there is only one winner left. Katniss’ wit to ensure a victory for both herself and Peeta sparks a rebellion around the country that the tyrannical rulers are adamant to extinguish.

This dystopia created by Collins has garnered millions of devoted fans around the world. Eager to see the universe from the books adapted to screen from the very beginning, the casting of these films has perhaps been the most exciting and frustrating aspect for them. And with several fan-favourite characters making their debut appearance in Catching Fire, the final shortlist elicited some strong reactions. Phillip Seymour Hoffman was roped in to play Plutarch Havensbee, while Jena Malone, who has several hits as a child star to her credit, will be seen playing Johanna Mason of District 7. The most awaited casting coup, however, was of course to be of the District 4 hunk Finnick Odair. Anything less than a Greek God would have been a disgrace to his legacy and at last Sam Clafin of Pirates of the Caribbean: On Stranger Tides fame won the role.

Other changes are in order too. Gary Ross, director of the first instalment, will be giving up his director’s seat to Francis Lawrence. Ross decided to part with the project during pre-production and the duty was passed on to Lawrence, who has previously directed I Am Legend, Water for Elephants and several music videos for famous names in pop. The trailer promises this venture will be more ominous and beautifully brusque.

The good news is that the fans, who call themselves “tributes”, seem to approve wholeheartedly.