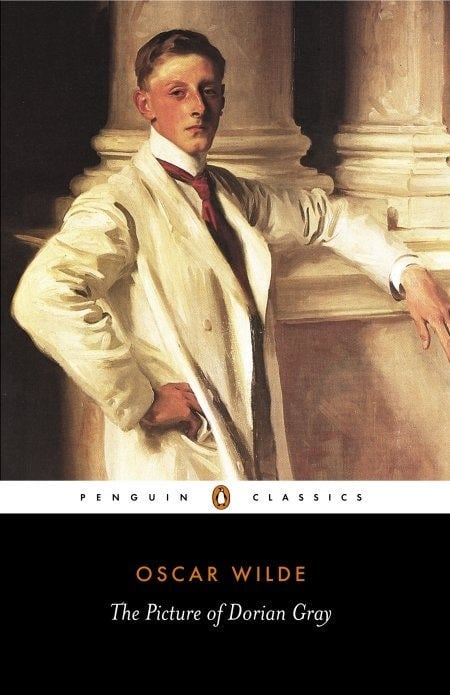 The Picture of Dorian Gray by Oscar Wilde (Penguin, 2000)

Flamboyant fop Oscar Wilde was one of the most controversial literary figures of his day. A remarkably eloquent and outspoken aesthete, he claimed to “have made art a philosophy, and philosophy an art.” Before being convicted and sentenced to two years’ imprisonment in 1895 for “gross indecency” (legalese for ‘being gay’), Wilde had cemented his reputation as a master of the epigram with his highly popular plays Lady Windermere’s Fan, An Ideal Husband, The Importance of Being Earnest, and his only published novel, The Picture of Dorian Gray.

The Picture of Dorian Gray is a hedonistic romp through the opulent high society parlours and seedy opium dens of 19th century London. Inspired by the hilariously decadent Lord Henry Wotton, the handsome young eponymous character sets out on a life of amoral excess safe in the knowledge that, by way of a supernatural twist of fate, it will be a portrait of him, rather than his own body, which will suffer the debilitating effects. Turning his back on virtue, Dorian spends the next 18 years indulging in every vice, his actual body remaining unchanged and youthful while that of his portrait grows older and more disfigured. However, despite his outward appearance, Dorian realises he cannot prevent the effects of his sins upon his soul, and eventually pays the price.

At turns deeply philosophical and wickedly funny, The Picture of Dorian Gray is both a thought-provoking and hugely entertaining novel. In the figure of Lord Henry Wotton, Wilde gives us one of the most quotable characters in 19th-century fiction, and it is impossible not to be seduced by his witticisms. Watching the 2009 film adaptation pales in comparison to the experience of reading the novel, since much of the dialogue is cut, and we miss out on Wilde’s rich and beautiful descriptive language. Despite being a relatively slow reader, it took me a day and a half to finish it.

“The only way to get rid of temptation is to yield to it.”