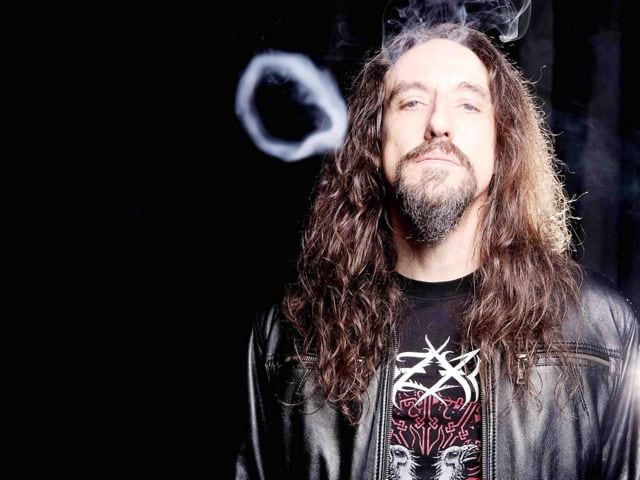 Steve Hughes is not your average comedian PHOTO: Impressive PR

Steve Hughes doesn’t look like your average comedian. With his tall frame, long hair, thick beard and leather jacket, he looks like he’d be more at home headlining Bloodstock than the Comedy Store. Funnily enough, the world of thrash metal used to be his home.

Born in Australia, Hughes started out as the drummer for a thrash metal band called Slaughter Lord. How did an Australian metal head come to headline at the Comedy Store in Manchester?

“I needed to get a job, without getting a real job. If I could do comedy, I could leave the country without having to make a whole band come with me. And I was quite funny, so I thought that helps.”

Hughes’ comedy is influenced as much by classic comics such as Billy Connoly and Richard Pryor, as it was by punks doing spoken word like Henry Rollins and Jello Biafra. Angry and political, his comedy found a surprise audience on Michael McIntyre’s Comedy Roadshow.

“What I do on there is not particularly controversial, obviously I tone it down a bit. But they haven’t asked me back. They’ve all been very nice to put me on the comedy shows; I’m a convict after all. Ha!”

Since then it’s all been touring for Hughes, he’s currently on a 50 date tour of his new show ‘While It’s Still Legal’. How’s the tour going and what’s his current show about?

“I’m 35 dates in so the brain is getting a bit tense. You get sick of hearing your own voice to tell you the truth. People have been showing up, which always helps when you’re doing a comedy show.

“It’s while stand-up comedy is still legal or any kind of opinion that dissents from the prescribed history they want to promote. As George W Bush said ‘You’re with us or against us.’ We’ve entered a climate where eventually anything you say that might offend people could be a crime.”

Hughes is passionate about free speech and his current tour rips into the culture of political correctness.

“It’s almost like intellectual health and safety regulations where you are starting to legislate into people’s subjective world views, making out they have the right never to be hurt again, which is a form of over-protectionist propaganda.

“It’s an illusion because obviously people get hurt on the Earth, both physically, emotionally and intellectually. There’s no way to stop this, and trying to create laws around this, is a blatant form of oppression disguised as a protectionist idea.

“Why can’t people have their feelings hurt? Why can’t get people get offended and fell bad about ideas they don’t agree with. How you deal with that in your emotional worldspace is entirely your responsibility. No one can make think or feel anything I don’t want, and to think that I can blame someone else for the way think and feel is a complete illusion.”

Health and Safety is another one of Hughes’ pet peeves. As soon as it’s brought up, he’s off on another rant.

“Health and Safety, what a form of oppression that is. Stopping grown men from doing what they want. There was a case recently with the rescue service, remember those guys who didn’t rescue a guy drowning in a river because they did a health and safety assessment? That’s what it does, it’s unbelievable I don’t trust any of it.

Hughes’ has tendency to sound a little out there with talk of thought propaganda and oppression. Nowhere is it more the case than when the discussion gets onto conspiracy theories, he self-describes himself as a ‘Conspiracy Realist’.

“Of course, people get very upset with people who come up alternate forms of looking at our shared history. Even though they’re true sometimes, great men in power sometimes act conspiratorially. I don’t see what’s wrong with being a theorist anyway, scientist come up with theories, but if your coming up with conspiracies somehow being theorist makes you a nutcase.”

Weirdly enough, the last time Steve Hughes played at the Comedy Store, he was following Nigel Farage at an event called ‘Stand Up For Liberty!’ during the Tory party conference. When informed of this Hughes seems a little confused.

“The UKIP people? I didn’t even know what they were. I just wondered why there were cops everywhere. I was told we were doing this gig for the people who against the no smoking in public laws. While it’s probably best if you don’t smoke in planes or in tiny French restaurants with no ventilation, then again I don’t see why I can’t smoke in a f****** hotel room I paid for.

“To tell you the truth, I didn’t even know what UKIP was. I’m hardly an expert on politics, if you want to discuss politics on a complex level, your talking to the wrong guy. People say I do political comedy, I don’t I just talk about what’s on the news.”

What was the reception like? Would a room full of mostly aging right wing political activists be receptive to Hughes’ controversial brand of comedy?

“Whenever you are telling jokes to people like this, corporate people or whatnot, you have to realise they don’t live in the same world as the rest of us. It can be quite bizarre to do comedy for them. But it was all right, some thought it was funny, some thought it wasn’t, but I got away with it.

“I didn’t even know what they were for, I was wondering why there were so many cops and they said it was some political party. It was like doing a corporate gig really, I’ve done a few and that’s what they’re like really.”

Hughes is probably one of the most unlikely choices to perform a corporate gig with his views on political correctness and conspiracies. What kind of corporation books him?

“I’ve done very few, maybe two in my whole life. I have nothing against people running a business or anything. In fact, as you get older you realise you’re not going to change f*** all. It’s not pessimism or a lack of hope it’s just having a deeper understanding of what life is really about.

“Life is a singular manifestation of an experience, the horror, the fun, it’s all just part of the big plan, or the big game. It’s a big f****** game isn’t it.”

This has struck a chord with Hughes who’s seamlessly transitioned from talking about doing a gig for UKIP supporters to discussing the meaning of life.

“Life is mental isn’t it? That we have to get born, have consciousness, wander round this earth thinking of plans. But ultimately we’re all going to die! As you get older you realise nothing I really thought is true. Life is too deep and profound to really have an answer.

“I’d love to comedy where I didn’t have to say anything. I do think one day I’m going to write a show where I don’t saying f****** anything about anything and I’m just going to make jokes about silly things. It would be far more fun to tour.”

To see Steve Hughes tell jokes about serious things, you can see his new show ‘While It’s Still Legal’ at the Comedy Store in Deansgate on November 13th. Tickets are available through the Comedy Store website.