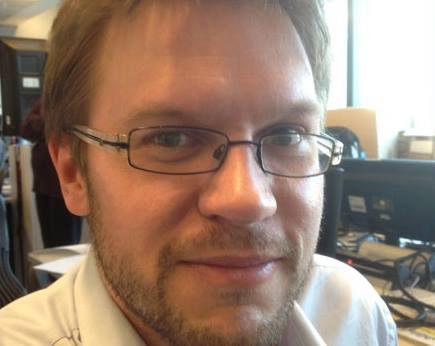 Politics lecturer Dr Robert Ford found himself labeled a “fat crackhead” on Twitter last week – all in a case of mistaken identity.

Tweets poured in at such a rate Dr Ford and his Twitter handle @robfordmancs were trending in the city of Toronto last Sunday, November 3rd – with over 1700 tweets sent out by between 600 and 900 users.

“I’ve had occasional bursts of it for a while now,” said Dr Ford. “The guy has a habit of saying and doing controversial things.”

Politely correcting most of those who sent hate mail, Dr Ford admitted sending “kind of a cranky tweet” on Sunday night when the tweets had piled in all day – but the mistaken identity has also brought him a small modicum of Toronto infamy.

Manchester’s Ford appeared on Canadian morning television to be interviewed about the mix-ups.

“That was a surreal experience,” he said. “It was kind of funny, and entertaining, and Canadians seem like a real nice bunch.”

While Dr Ford told one tweeter he was “not fat, not Canadian, not a mayor of anything, not a crack connoisseur”, he does have something in common with the disgraced Toronto mayor.

“In my youth, I was occasionally involved in what might be described as drunken stupors,” said the politics lecturer. “In that respect I was a fairly typical student, so I sympathise with him a little bit when he says he doesn’t quite remember what he did!”

The similarities stop at name and memory loss, though.

“I don’t think he would be very good at delivering high quality feedback and timely marking, as I obviously do as a conscientious lecturer,” he added.

Dr Ford is now being lavished with more attention – of a different kind – by Torontonians after being in the media.

“You are in our [newspaper] and I must say unlike our very unattractive Rob Ford, you have sexy lips!” tweeted @ClassyLady_Lisa.

Dr Ford is no stranger to online woes caused by namesake confusion. The release of ‘The Assassination of Jesse James by the Coward Robert Ford’ in 2007 also played havoc.

“My Google rankings were only just getting over that bloody film,” he said. “It’s killed Google for me now.”

Despite his newfound fame, Dr Ford sees the funny side of the situation, “You have to view the whole thing a bit tongue-in-cheek really.

“It’s just a bit of a bizarre coincidence that leads to a slightly surreal start to your week, and then life goes on!”