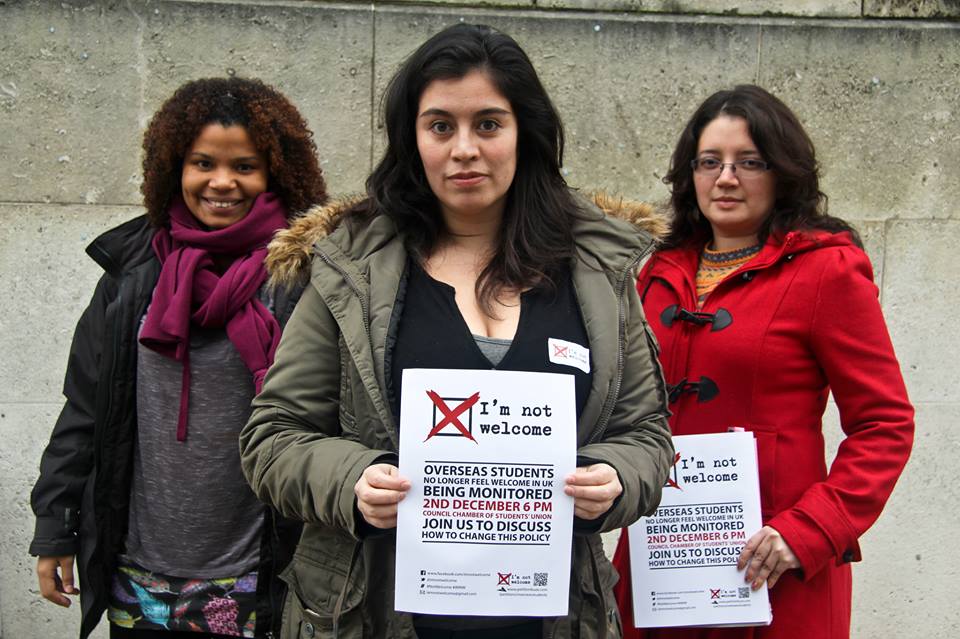 Overseas students are vital to universities. The huge fees they pay, which can be in excess of £20,000 per year, provide an essential source of funding for universities such as the University of Manchester. Given the huge contribution they make, you’d expect the Government to roll out the red carpet for them. In reality, many feel they are under constants surveillance by the UK Border Agency and no longer feel welcome.

To challenge this contradiction, overseas students at the University of Manchester have launched a campaign to raise awareness of the UKBA’s heavy handed monitoring policies.

“On one side, we have a university that is very welcoming and all our classes are very welcoming, but at the same time we have a discriminatory politics from the government that make us feel very unwelcome,” said Chilean physics PhD student Tania Sauma.

The main target of the I’m Not Welcome campaign was the UK-wide surveillance and monitoring of international students. American cultural studies PhD student Patrick O’Shea explained the policy, “This is a policy that originates from The Home Office, it’s administered through the UK Border Agency and the distinct schools of the University.

“It might differ in the way that it’s administered, universities might choose to do it differently, but all UK universities are obligated to monitor their non-EU students.

“This is part of a broader set of overseas student policies which go into an even larger set of anti-immigration policies of this government.”

When Tania Sauma arrived in the UK to begin her studies, the situation was very different.

“It all started last year, I arrived in April 2012 and everything was fine then. But things changed very quickly after the London Metropolitan case. After that all the Universities were asked to monitor the students.”

At London Metropolitan University a large number of overseas students, who were primarily coming for language courses, were on either fraudulent visas or were not completing the terms of their visas. As a result, London Metropolitan were stripped of their Highly Trusted Sponsor status which allowed them to sponsor applications for student visas from international students.

Overseas students, including the ones that had not come on fraudulent visas were being punished for the University’s lax behaviour, they were told that they had 60 days to either find a new place of study or leave the United Kingdom. For London Met this was disastrous, the University relied heavily on revenue from overseas students. While the UKBA eventually reinstated the University’s Highly Trusted Sponsor status, the damage had been done.

Patrick O’Shea explained that, “What’s happened since then is a crackdown on all the overseas students across the UK in universities. So the UK Border Agency and the Home Office have been putting pressure on the universities and have obligated them to start monitoring the attendance [of overseas students].”

“If we do not hear from you within 5 days of receiving this email we will have no alternative but to request that your absence be reported to the UK Border Agency (UKBA). This will mean that your permission to remain in the UK will be curtailed and you will have to return home as soon as possible (but definitely within 60 days). If registered, you will be withdrawn from your course at the University.”

Patrick compares it to being under house arrest or benefits, where you are regularly forced to sign in.

“Our big opposition to it is not just that it makes us feel unwelcome, which is the immediate impact, but in the larger picture it has repercussions for the way the university system across the UK will be affected in terms of attracting overseas students,” he said.

The visa restrictions on overseas students will be expanded to cover not just students but overseas scholars as well.

“There was an 80 year old historian from Algeria who got denied his visa to speak at a conference. He was invited by Oxford, not Manchester Metropolitan, but Oxford. This is happening across the country. The Anthropology conference organised here, was organised by a Manchester University professor called John Gledhill. He was cited in a Guardian article, he had a really hard time organising that conference and getting people from outside the UK to come in and speak.” Patrick said.

“I think it is harming academia in general,” added Tania.

The I’m Not Welcome campaign were quick to point their grudge is with UK Border Agency not the University.

Patrick said, “It is not the school. In fact, you can tell when the school language ends and the UKBA language begins, because it becomes more threatening. It basically says that if you don’t come in within five days we will report you to the UKBA, your visa will be revoked, your programme will be cancelled and you have to leave the UK within 60 days.

“It is not a hard thing to do, but essentially what it constitutes is another mechanism for the Home Office and the UKBA to be able to deport us if they see fit. It’s a way politically for them to be able to look good for the right wing politicians and the people who want to get tough on immigration. Targeting international students is an easy way to do that because there are not a lot of repercussions.”

Tania said she felt “powerless”. In her case she went on holiday for one week, she’d notified her PhD supervisor that she was taking a week off. When she came back she had two emails from the school.

“One said ‘Tania, congratulations you have just got funding from the school for your experiment.’, then another email from the same secretary said ‘You will get deported because you have missed the International Student Census’. I thought okay, this doesn’t make any sense. Why are they funding me, if they are going to deport me, if I am being so dangerous or doing something so wrong, why would they fund me.

“We realised that the University is not willing to do this. They are just doing it because they have to.  There is no need to do this because we are actually being monitored by eProg, which is the online system for PhD and Masters students, and the undergraduates have to report into tutorials.”

Patrick stress ‘we are duly monitored, as PhD students we have to have monthly meeting with our supervisors. In some respects, we always have to be monitored. All these threats come before our visas actually expire. They basically say that we are going to terminate your visa early.’

While the monitoring is the focal point of the campaign it is not the only policy directly affecting overseas students. Once undergraduates and masters students finish their programmes, if they wish to stay in the country, they are only given two months to find a job which makes over £20,000 a year, if they cannot they have to leave the country. The employer also has to be able prove that a Briton couldn’t have been employed for the same role. The whole system is absurd, we educate some of the best and the brightest in the world, yet we only give them two months before we kick them out. Recently, the government have decided to extend the period for doctoral students who can now extend their visa for a year for £400.

“I wouldn’t be here” Tania said and Patrick concurred that he wouldn’t likely either. This isn’t just an issue affecting overseas students alone. If these proposals go ahead and people like Tania and Patrick choose not to come universities will lack a key source of revenue and will devalue our universities as they would no longer be able to attract the best talent in the world.

“I have a scholarship from my government, I am absolutely funded by the Chilean government. I get nothing from the UK except the use of the NHS – I only went once. I could be anywhere else in the world because of my academic profile and because of my government funding. I just don’t want to be treated this way. If I had known things would have been like this I would have gone to France.”

The I’m Not Welcome campaign will hold their first public assembly on Monday the 2nd of December at 6pm in the Council Chambers. To find out more about the campaign, you can visit their facebook page: https://www.facebook.com/imnotwelcome/