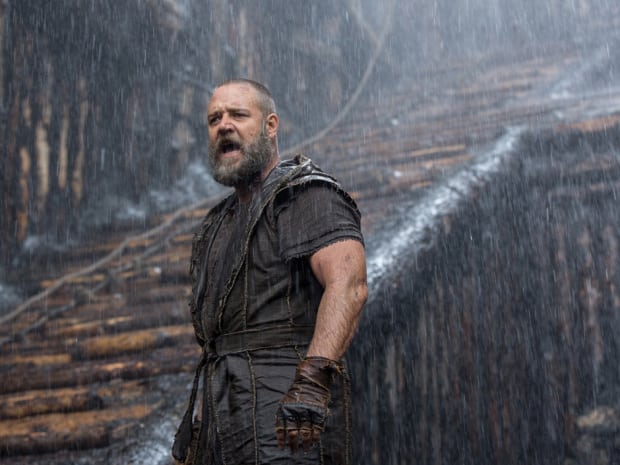 2014 sees the release of not one but two biblical blockbusters. Darren Aronofsky’s Noah opened in cinemas last Friday, with Russell Crowe as the most famous boatbuilder of all time, and later this year, Christian (no pun intended) Bale is set to star as Moses in Ridley Scott’s Exodus.

Hyped up to the eyeballs it may be, not least because it marks Aronofsky’s first venture into epic filmmaking, but Noah has most recently been hitting headlines due to its controversial subject matter. Indeed, it’s been banned in several countries for its warts n’ all representation of the biblical events, marking something of a departure from the classic “two by two” Sunday school version.

This of course is not the first (or last) time film has ‘done’ the Bible. What’s more, when it does, controversy is always the sub-text – the Bible is a touchy subject, and invariably films which trespass onto biblical territory get mixed and uneasy reactions. Films like Scorcese’s The Last Temptation of Christ and Mel Gibson’s The Passion of the Christ or even Ron Howard’s The Da Vinci Code have all suffered from controversial backlash prior to their release.  However, these films have also all then gone onto achieve great critical success, with all three films receiving Oscar and/or Golden Globe nominations. Given such controversy, however, the question arises – is there room for faith in film?

Film is a powerful medium, accessible and engaging, and for this reason tailor-made for challenging audiences.  But there is no reason why taking inspiration from the bible has to be controversial.  That book is jam-packed with ripping yarns and film has done a lot worse in the past and present than retelling a bible tale!  A filmmaker’s particular interpretation of a bible story need not engage with the whole ‘faith’ thing, it can be taken simply as an artistic engagement with or interpretation of a good story. Adaptation has a major role to play in cinema – fiction and non-fiction, old and new, religious or secular – and this is because film is the perfect medium to revive and enhance well-loved stories, allowing us to re-engage with them in new and dynamic ways.

Cinema has a history of controversy, that’s what makes it so exciting. But what is just as exciting to witness is its power to move audiences and test the boundaries of what cinema can do. There is room for faith in film, not as the butt of a lazy joke or a target for skepticism, but as the basis for audiences to reengage or encounter for the first time stories that may have had massive global impact throughout history.  Ben Hur was perhaps the paradigm example, with its epic portrayal of one man’s life interwoven with that of Christ without the latter ever being a direct part of the story.  In a completely different way, Franco Zeffirelli’s Jesus of Nazareth with Robert Powell engaged completely and directly with its subject without preaching at any level.

What these biblical remakes do teach us is that film is now the major artistic and cultural medium of our generation.  It alone perhaps has the power to bring these monumental stories to the attention of an entire world.  It puts a lot of responsibility onto a filmmaker’s shoulders.  Film is of course entertainment, but nowadays it is much, much more, too; a key cultural and academic activity, with the power and authority to educate and engage audiences across the globe.  Noah was always pretty impressive, but now he’s going global everyone!

Whatever your religious views, go see these biblical blockbusters with an open mind.  Take them at face value.  Enjoy them simply as stories so good they have lasted thousands of years.  If something deeper comes through, if the director manages to challenge or inspire you, then all the better.  That should be enough to restore your faith in film. But at least, if nothing else, it’ll be worth the crack to see Russell Crowe attempt to manoeuver an army of CGI’d animals!