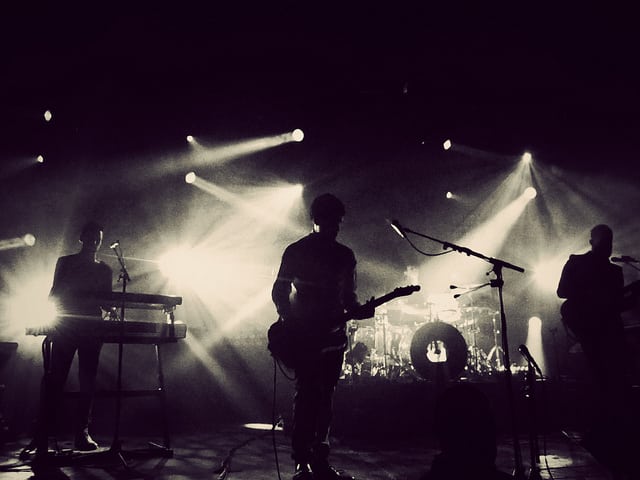 After trekking to Y Not Festival every year since 2009, I had a self-intervention and said I wouldn’t go in 2014. I would save my money and try out some smaller festivals instead… That didn’t work out.

Instead, I once again found myself being drawn to deepest darkest Derbyshire along with roughly 10,000 other people. The festival was sold out, and the site had morphed to cope with demand. Sure, there were still all the same stages and bars, but with some nice extras added on, including a load more food stalls and a funfair complete with Ferris wheel.

The festival has grown up a lot since my first year, so it stands to reason that it has become a little bit more corporate. I still reserve the right to complain though. Sure, there are still bars that sell local ales, but the main bar, Dolly Dagger’s bar, has gone all Hobgoblin, and it seems like the big-festival-bar staple has well and truly taken over.

Y Not’s main selling point was always its bands, though, and by the time I got there the staggeringly diverse bill was already in full swing. Kicking off my festival was Sonic Boom Six, who commanded the crowd like DJs at some futuristic rave. It wasn’t even teatime yet, but they had the crowd going mental, and set the tone for a great weekend to come.

Another Friday highlight was the ever-brilliant Spector. Their set included triumphant outings of a few of their early singles like indie disco staple ‘Chevy Thunder,’ as well as some great-sounding new tracks.

Closing the first real day was White Lies, who I must admit I used to be a little bit obsessed with, so my hopes were high. I was in no way disappointed. Their music is atmospheric enough on CD, but when it is coupled with a great live atmosphere, and ethereal light show, it was simply jaw dropping. As well as tracks from their well-loved debut, they took the perhaps risky decision to show off some of their more lesser-known songs too. It paid off though, and the good mix of tracks just added to the atmosphere.

Saturday was a day of brilliant bands, almost none of which were on the main stage. Starting off the day was Beans on Toast, who is definitely on my shortlist for best live act. He led the crowd in sing-alongs about chickens, Glastonbury and poverty. Sure, there were some little slip ups, but if you were expecting Jay McAllister to be technically perfect then you’re completely missing out on one of the best parts of his show.

My only trip to the main stage on Saturday came in the form of a trip to see Catfish and the Bottlemen. I can only see good things in these guys’ future, and their Strokes-esque indie rock almost seems to be built for stadiums (or the Derbyshire countryside).

You know earlier on, when I called the bill ‘staggeringly diverse?’ I wasn’t joking. Saturday night saw Dizzee Rascal on the Main Stage going head to head with the Blackout, who were headlining the Giant Squid. I personally opted to see the Blackout, and I don’t regret it at all. Their set was completely electric – explosive, loud and full of unbridled energy that literally brought the whole tent to their knees.

Unlike some of the other bands across the weekend, the Blackout actually acknowledged the crowd. Even more than that though, they made the whole gig feel special. Rather than giving a few lame high fives to the front row frontman Sean Smith opted to shatter the ever-increasing fourth wall between act and crowd. By the end of their second track he was right at the back of the tent serenading the sound guys and starting mini circle pits, and it just got more mental from then on.

On Sunday the sun came out, and despite some close calls, decided to stay. It was a pretty chilled day, and it seemed like everybody was resting up for the main attraction, Mr. Frank Turner, along with his Sleeping Souls. The charged act sure was a change of pace, but everybody seemed up for it. In fact, the folk-punk singer seemed to have the crowd in the palm of his hand, and big-hitters ‘Recovery’ and ‘Photosynthesis’ create huge sing-alongs, with almost everybody joining in.

As the band plays their final chords, a melancholy comes over the site, and you can almost hear hearts breaking that such a great weekend is over.

I should stop resisting, Y Not is here to stay.