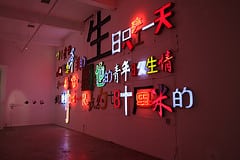 China is undoubtedly a breathtaking country with years of traditions and rituals which form a truly unique identity for the people who live there. However within our modern world, China is in danger of losing all of this as international travel and immigration becomes easier.

Manchester has the largest Chinese community in the UK and one of the largest Chinatowns in Europe which makes it the perfect place to explore this traditional and unrivalled culture through art and trans-cultural debates which affect the country’s future.

The Centre for Chinese Contemporary Arts is like a secret haven. Down some back streets in the Northern Quarter it sits quietly and undisturbed by students. This is what makes this place so unique. When walking through the front door, you are suddenly hit by the exoticness of China and you are able to get a real sense of the dynamic and ever-changing Chinese culture from the galleries of art displayed.

The Centre, which has been a starting point for many exceptional artists who go on to receive international acclaim, has been displaying various works of art for almost 30 years. Not only does this centre act as a gallery, but also holds many projects for visitors to take part in and is a venue for many festivals throughout the year.

Next week, the Asia Triennial Manchester festival opens and the Chinese Centre for Contemporary Arts will be one of the six major venues across the city to host this new festival. The theme this year is ‘Conflict and Compassion’ and the Centre will host an exhibition entitled ‘Harmonious Society’.

In the past three decades, China has seen unprecedented change. Gross domestic product has risen by 536 per cent triggering huge changes in society and rapid urbanization has produced an ever growing gap between rich and poor. Political reform and instability adds to the struggles of everyday life in the country. This is the message that the exhibition will target with the inspiring work of 30 Chinese artists.

Manchester holds many art secrets and the Chinese Centre is worth a visit for anyone who has a Chinese heritage or even just an interest in the dynamically diverse culture of the country. Learning through native artists provides a further insight than any textbook or history essay ever will.