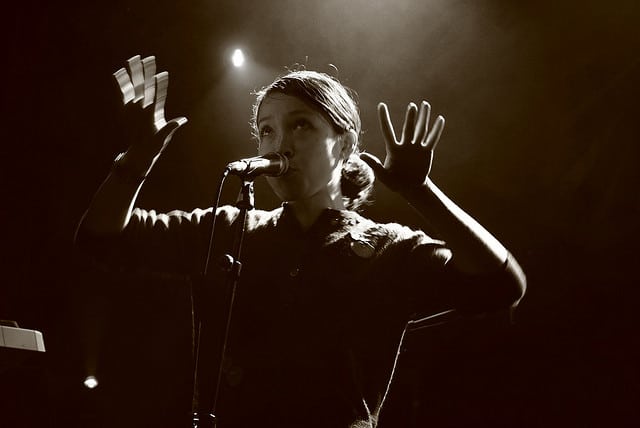 Little Dragon have proven to be an eclectic electronic band that can mix dance music well with “Janet Jackson slow jams”. The high school friends Yukimi Nagano, Erik Bodin, Fred Wallin, and Håkan Wirenstrand finally released their fourth album Nabuma Rubberband last May via independent London based label Because Music (Justice, Erol Alkan, Daniel Avery), coming nearly three years since their breakthrough album Ritual Union. The band have shown everyone that they definitely aren’t a one hit wonder, and have real staying power. This is down to their constant evolution: mixing dance music with dreamy down tempo synth pop.

Their unique front woman, Yukimi, came on the stage, banging a cowbell dramatically. You can’t deny that Nagano is gorgeous, but the focus was not just on her beauty and cool outfit. She flirts with audience with her dreamlike voice and dancing, and her delivery was phenomenal. I couldn’t help but feel happy to know that there are still some sick bands out there that don’t use their image to sell their music. They are Swedish, and Yukimi is half Asian, so perhaps style is innate for them anyway.

They won over the crowd with their heart thumping songs, especially ‘klapp klapp’. Their energy as a band oozes out with the upright bass and mesmerizing synth. They made Albert Hall feel magical and exciting. I felt like I was in Hogwarts and Yukimi was singing a bunch of cool spells. I reckon Little Dragon’s patronus charm would be Prince riding a unicorn.

They have has a string of sold out shows; no doubt the future is bright for Little Dragon. They are one of the best things that have happened to current music – wrestling wonderful slow-burners and fun electronic music.