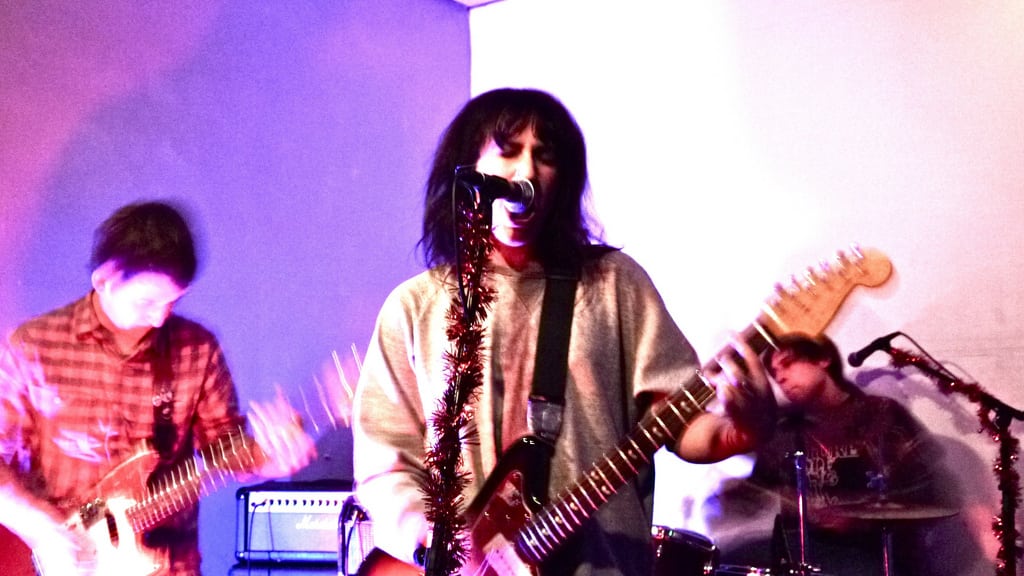 Speedy Ortiz are a band who have witnessed their fair share of crowd violence. In fact, their own ball-busting music has often been the catalyst. But after years of toxic shows, they have taken it upon themselves to introduce a note of caution through a texting hotline that will allow threatened crowd members to alert security.

I know what you may be thinking. Being in a moshpit can feel like you’ve entered into a community of mutual tolerance and respect. Why temper the madness? It’s the ultimate socialist microcosm, right? Well that’s what I thought, too, until this year. At a Thee Oh Sees gig, a copy of Eric Hobsbawm’s How to Change the World fell out of my shoulder bag and got ripped to shreds (not an ironic metaphor—this really happened). Once the crowd had dispersed, I picked up my remaining shreds of paper and left with a purple bruise above my right eye.

Anyone who saw last year’s documentary The Punk Singer probably saw Kathleen Hanna—the feminist punk trailblazer and singer of Bikini Kill—screaming “GIRLS TO THE FRONT!” to a crowd dominated by rowdy men. The message was not a call to protect women. It was an attempt to create an environment in which women could express themselves without drowning in a sea of testosterone. It should be noted that Speedy Ortiz’s initiative is not just aimed at women but, as you may have noticed, moshpits tend to be male-dominated.

People in moshpits turn into big, sweaty swamp monsters that you might not want to be around if you aren’t intending to mosh. Some people get so jacked up that everyone else within a five-metre radius can’t enjoy the music without being slightly concerned about getting murdered. 99 times out of a hundred, ‘the code’ of the moshpit is respected: Elbows are kept within the realms of bodily control; a clearing is formed when someone falls to the ground; friends are made. But for every 99, there is always that one gig. The one with a sadistic fucker whose one wish is to hurt people.

Well, Sadie Dupuis, Speedy Ortiz’s lead vocalist, has had enough of oppressive behaviour at gigs. Enough of the hostility. Enough of the groping. She and the band have taken the initiative to launch a texting hotline (with a phone number provided pre-gig), whereby if you feel threatened or endangered, you can alert the band and the authorities to the problem. The band’s new manifesto of sorts, entitled ‘Keep Speedy Ortiz Shows Safe’, states that all concert-goers “have a right to an inclusive, welcoming performance space.”

The response to Speedy Ortiz’s innovation has been almost unanimously positive. Although calling for another concert-goer’s expulsion may sound like a form of citizen’s arrest, the method comes nowhere near to hawk-eye verbal policing or witch-hunting for bad eggs; spotting somebody and kicking them out is a last resort.

The approach is a tactile, discreet way for someone to call for help, so that the band and security can decide on how best to resolve the situation, whether that be escorting the victim to the front or just being aware enough to cool the air. Now, Speedy Ortiz aren’t the type of band to incite a riot like Limp Bizkit at Woodstock ’99, or galvanize rabid hippies like the Stones at the Altamont Free Concert in 1969, but any potential future catastrophes like these can be stemmed at the root with a texting hotline.

Meanwhile, Speedy Ortiz will presumably play to a peaceful, well-natured crowd at Sound Control on the 16th of October. It should be a rip-roaring show—but for goodness sake, behave yourselves!