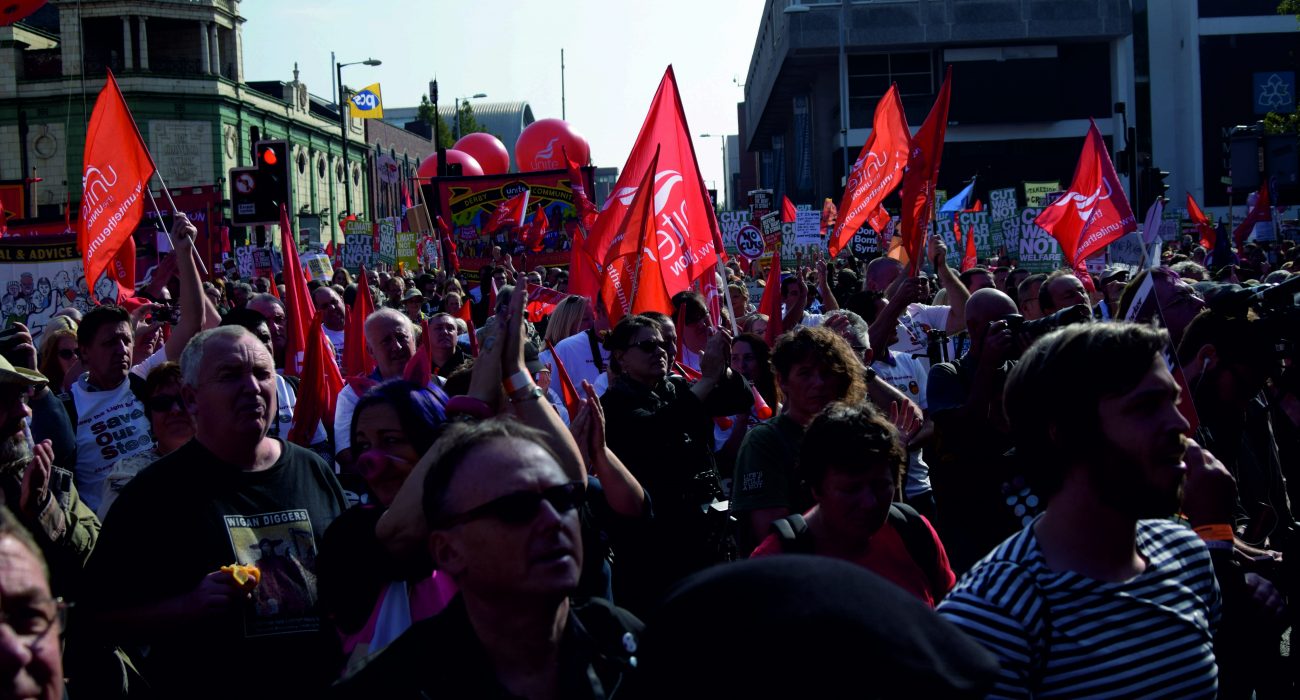 Estimates of between 60,000 and 100,000 people have been made about the number of people who turned out to march against the Tory conference last Sunday. Photo: The Mancunion

Last week saw tens of thousands take to the streets to protest the Conservative Party Conference. Alongside the march on Sunday, Manchester People’s Assembly organised various events for the anti-Tory protesters to attend as part of their National Week of Action.

On their website they declared their aim was to “send a clear message that austerity has failed and demand policies that benefit the majority and not just the few at the top.”

The following night saw an estimated 8,000 flock to see Jeremy Corbyn speak at a rally for The Communication’s Workers’ Union; the event was so popular the overspill filled the whole of Cathedral Gardens. It has since been learned that the Bishop of Manchester gave People’s Assembly a discounted price to hire out the venue, two nights in a row.

That same night, Manchester Academy was taken over yet again for ‘Beat Back! Music against Austerity’, with Super Furry Animals, Charlotte Church, and Public Service Broadcasting entertaining crowds of protesters.

The week also saw many more protests take place across Manchester including; No to TTIP; No Fees, No Cuts, No Debt; Refugees welcome here; Disabled People Against Cuts Protest; and No to Fracking—Save our Solar!

On the final day of action, People’s Assembly hosted ‘People vs. The Tories’, a review of the week of action.

Discussion turned to the panel’s highlights of the week. An “all Tory’d out” Owen Jones joked that his climax was being called “Tory Scum” whilst covering the conference, while Penny Hicks declared the Tory presence in Manchester to be a “gift.”

A key debate rose between the panel and the audience about how best to go forward from the week’s action. Owen Jones argued that while there were many causes to get behind, “focusing on one battle was important,” since divisions between the left have historically caused their ultimate failure.

Jones compared how the Poll tax movement united a massive chunk of the population against the Tories to the present anger against Tax Credits cuts. Hicks highlighted that the People’s Assembly’s main aim was to listen to everyone’s causes in order to unite their fight together. Asquith also echoed this message, calling for everyone to look for where the issues overlap, “as your fight is our fight is everyone’s fight.”

Jones eulogized about the clever and successful use of language on the right. The Conservatives have successfully deployed ideas such as the Northern Powerhouse. “Why would you argue against a powerhouse?” he asked the audience.

The divide between North and South became a key talking point when Jones argued that there lies a flaw in the left protest movement because it should not always be “North versus South, since London has some of the highest levels of poverty.”

He pointed out that Tower Hamlets was the worst Local Authority in the country for child poverty, with Hackney close behind—both in London. He added that we should be seeking to “build solidarity across the country, while also addressing regional inequalities.”

Junior doctor Teddy Williams spoke of the fact that doctors traditionally have not had a large role in protest and solidarity but that when “[the government] loses all compassion, then you’ll end up having everyone” stand up against them. He spoke of the drastic changes being forced upon an already overworked junior doctor workforce, and explained that they don’t want to take industrial action but they may have to do so in order to protect the service they provide.

The event ended with discussion as to where they would like to see the movement in the next few years; Shelly Asquith avowed that “we need to step up our game—now not in a couple of years—the movement needs to grow now and we can’t wait until 2020 at the ballot box.

“What we have built here in Manchester this week needs to grow. We need to stop the government before it’s too late. If we keep building on this week, we can and we will win.”

She outlined the NUS plans for demonstrations against the Conservative government, including an international student walk-out, and the upcoming march against cuts to grants on November the 4th. Asquith also gave her thanks to the University of Manchester Students’ Union and declared the week a “massive show of resistance,” pointing out that “there were more of us on the streets [on Sunday] than [the Conservative party] have in membership numbers.”

Videos were also shown during the event to summarise the week. It included appearances from members of BBC Three’s The Revolution Will Be Televised, and interviews including Tim Stanley (a right-wing columnist for the Daily Telegraph), who explained that the anger of the protesters was understandable.

Hicks thanked all of the volunteers and attendees to the People’s Assembly’s events and added that “we want more, we want to keep up this feeling,” before declaring, to huge applause, that “we are going to bring this government down.”

“Ten thousand people in Manchester created change,” said Taylor, “and we are the change that is going to happen.”

Christian ended the event declaring that “we’re all entitled to be part of this society.”

Penny Hicks invited everyone involved in the National Week of Action to attend next week’s People’s Assembly meeting on Tuesday the 13th of October at Central Hall on Oldham Street.

Overall, the Week of Action has been successful in gathering together large numbers of people, while remaining very peaceful; of the estimated 60,000 to 100,000 attendees of the Sunday march, only four arrests were made.