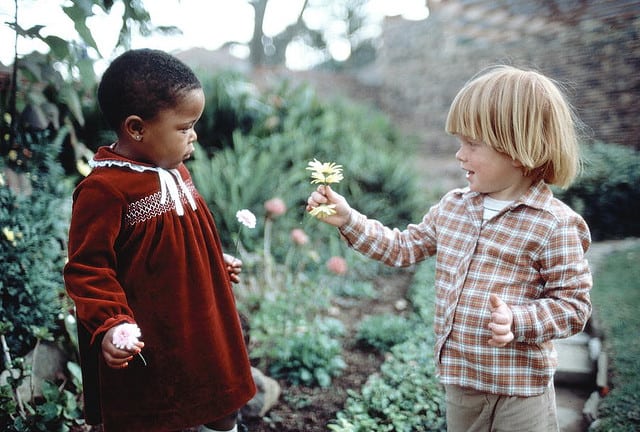 Studies show that children learn most of their behaviours from their environment. Photo United Nations Photo @Flickr

One thing that I find striking about racism is the way in which, despite the tremendous efforts to try and combat it, prejudice and discrimination towards other races continue to circulate in our society. This leads me to question exactly what we really know when thinking about the root of the problem. Perhaps, our lack of knowledge regarding the subject is what is holding us back from doing more in the fight against racism. Yes, we are aware of what it is, and the effects it has had on millions of people throughout history. But the real question is, where does racism come from? It is my belief that if we figure out the origins of racism, this could perhaps lead us to discover the origins of the problem altogether.

Moroccan writer Tahar Ben Jelloun has said: “We are not born racist, we become it.” Clearly this statement holds a high degree of truth; racism is not genetic, therefore we are not born with feelings of hatred and prejudice for another race. There is no gene in our DNA that makes us discriminate, enslave and alienate other humans of a different race in the same way that there is a gene that allows us to develop a particular eye colour. With that being said, understanding that racism isn’t a biological attribute suggests that such behaviours that invoke us to hurl racist insults or harm another human being because of their skin colour or religious background, must stem from our environment. That is to say that we are taught and therefore learn to be racist.

Very rarely do we see a young child demonstrating racist behaviour of their own accord. Studies by the psychologist John Bowlby show that an infant’s first natural instinct is to desire security and a loving attachment from its caregiver. Note the word—loving. If that is the case, and racism is a learned behaviour, from whom is this behaviour learned from? Some may argue parents. As it is usually said, our parents are our first teachers. They teach us to differentiate right from wrong; most times without even realising it. Children find it natural to imitate what they see in order to learn how to do things. Children follow adult behaviour because they deem it to be correct, even when this is not always the case. These behaviours are imitated and engrained in the child’s mind as the “right thing to do.”

Another study by Albert Bandura in the 1960s on social learning theory, shows that children were more likely to act violent towards an inflatable ‘bobo’ doll after watching the adult treat the doll in a violent manner. I find it rather chilling that children pick up incorrect behaviours as fast as they do with the correct ones, and that once they are learned they are quite difficult to reverse. This leads to me to understand why something as pitiful and degrading as racism, and the discrimination and hatred it projects, has continued to remain in our society all these years.

Children are taught, by the older generation, to follow false ideals that treat racism as normal, where distinguishing the differences between each other is done by making the other race feel inferior. This corresponds to the way that children in the experiment felt it necessary to imitate the incorrect behaviours carried out by the researcher. This is why, despite all the measures taken by societies to rid themselves of racism, it remains. These flawed principles are carried on from one generation to the next and as a result pollute the minds of the youth. In my eyes, racism will continue as long as it is allowed to happen, and younger generations continue to accept these wrongs as truth and thus the devastations caused by racism will not cease.

One particular devastation that stands out to me, and can show how racism can be passed to younger generations, is the conflict between Israel and Palestine. What is underlying amongst the dispute is the discrimination that they both project towards each other. While they continue to attack each other, what is more evident is the way in which the future of the youth is being destroyed in the process. This saddens me, and makes me wonder if the parents that sustain this conflict realise this.

Finally, I do see a sliver of hope in younger generations, where racism is not as apparent as it was in their parents’ and grandparents’ generations. If we, as intelligent, open minded, young individuals reject these ideals then perhaps, it is a step in the right direction towards a brighter future where racism is left behind.