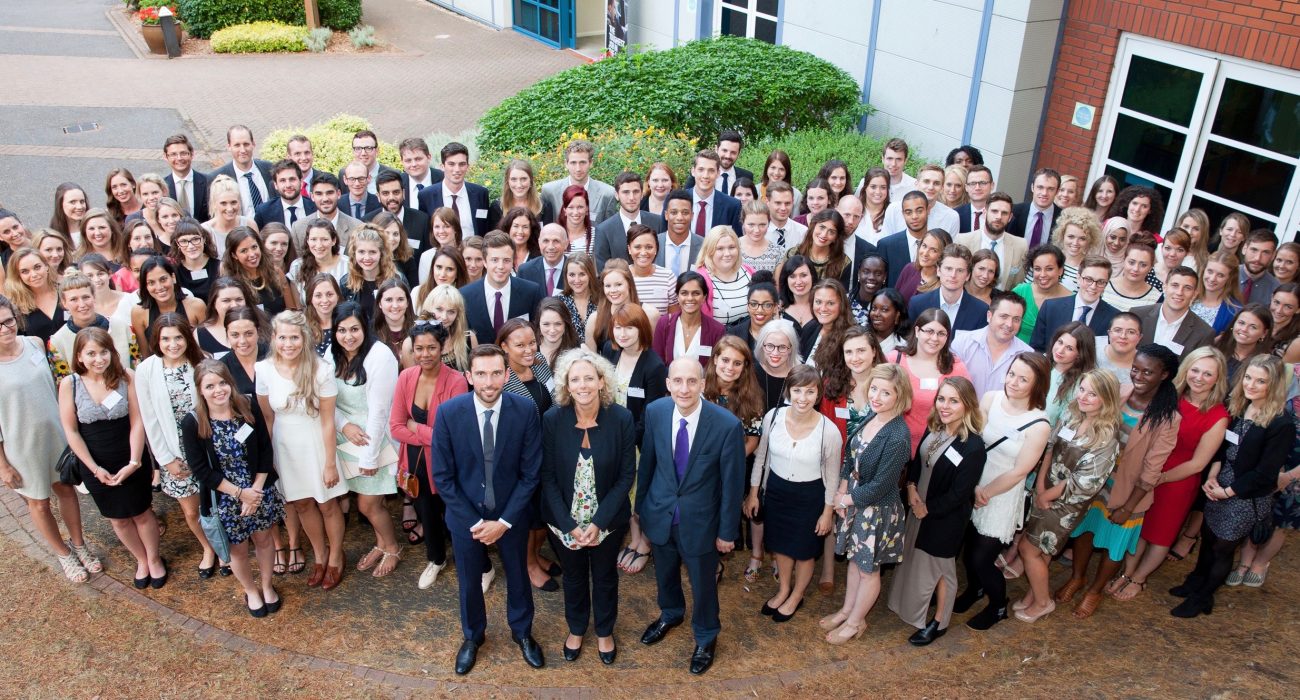 Manchester graduates on the Frontline

Social work is not the most glamourous profession university students will consider as a career once they have completed their degree. Chances are that you will not have thought about becoming a social worker before.

Indeed, social work is a highly demanding career that, unfortunately, has seen more negative than positive headlines in the last few years. Controversies in Rochdale, Birmingham and Haringey have not been ideal from a PR perspective.

The negative headlines come at a particularly inopportune moment, as there are around half a million children in the UK that need social work at any one time. These children, at risk of abuse or neglect, are ten times more likely to be excluded from school; only seven per cent get to go to university; and, most staggeringly, a quarter of the young prison population were in care at an earlier stage of their life.

However, in a bid to address this challenge, one University of Manchester alumnus has teamed up with a Labour peer to make more top-quality students consider social work as their career. In so doing, they are hoping to transform the lives of vulnerable children across the UK, and improve the image of social work nationwide.

Josh MacAlister graduated from the University of Manchester in 2009, with a degree in Politics and Social Policy. He subsequently joined Teach First to train as a teacher, before his big idea hit him: What if he applied the Teach First model of training—an intensive, but short, residential course followed by on-the-job learning—to social work?

He wrote a paper after his Teach First placements in Oldham and Stockport, having been inspired by seeing the attainment gap between children who had social workers involved at home, and those who did not.

“It wasn’t statistics, it was the real life stories of children who were not going to do well at school, who were going to struggle to get a job, had huge disruption and distraction in their home lives; and I compared that to the status, the standing, the lack of prestige in social work.”

Josh’s treatise came to the attention of Labour party peer Lord Andrew Adonis and, together, the two managed to get Frontline off the ground in 2013.

In its first year, there were 27 applications for every one place available on the scheme. Now, they have shot up from 76th to 40th place in The Times Top 100 Graduate Employers, leaping above companies like Bloomberg, RBS and Citi. This year, there are places for 180 graduates who would like to become social workers, with a commitment of two years.

Lord Adonis is the son of a Cypriot immigrant, who was placed into voluntary care, and lived in council children’s home until the age of 11. He went on to earn a place to study at Oxford, where he earned his Ph.D. in History. He became an academic of repute and had a stint as a journalist, before he was made a key advisor to Tony Blair in 1998, covering education policy.

He was the driving force behind Labour’s academy programme and pioneered the plan for the HS2 rail line. He has recently been in the news for giving up the Labour whip in the House of Lords (though not his party membership) in order to chair the new National Infrastructure Commission, which has been set up by Chancellor of the Exchequer George Osborne.

Adonis is also the chair of Frontline, and MacAlister tells me in no uncertain terms that, without him, Frontline would not be prospering as it does today.

“Andrew’s got quite a rare political skill, which is he can get things done… He’s also got the ability to work party boundaries to make things happen, which is quite an admirable thing in politics.

“From the get-go, Andrew knew what was needed to get government interest, he advised me on how to build the case for change at the Institute for Public Policy Research, and also meant that throughout Frontline’s existence, we’ve been given enthusiastic cross-party support, which is still true to this day.”

Despite the consensus amongst political parties on the virtues of Frontline, the charity has not been free of criticism. Some social work academics have criticised the programme, accusing it of fast-tracking graduates into the highly sensitive profession of social work. There are also concerns about the balance of the social workers they recruit, as three-quarters are women.

On both of these points, MacAlister is bullish: “We have one of the most rigorous selection processes in the whole graduate market, and certainly the toughest process to get on any social work course. We look at both intellectual ability and personal qualities and attributes.

“The feedback from the local authorities we have placed them in has been very good, and there’s more demand for Frontline participants than we have participants available. There were some early sceptics, and they’ve not all gone away, but we’ve persuaded people over the years that we’re adding something to a profession that already had top quality professionals.”

MacAlister also doesn’t worry about the diversity of the intake: “One in four of the cohort are men, which is a larger proportion than on other routes in social work.

“I think part of the problem is a misunderstanding about what social work is. It often gets confused with care in the community. Sometimes people think it’s about visiting elderly people at home and [providing] meals, which is perfectly fine for people to do, but it’s not the same as child protection and child in need social work, which requires a much broader and much more demanding mix of skills that men and women both have to offer.

“All of the skills needed in a social worker are not particularly gendered so it should be the case that more men come into social work and the profession, and I think that lack of balance is due to a lack of understanding about what’s actually involved.”

Alice Withington, also a Manchester alumnus, was part of the first cohort of social workers, and is now working in Harrow in London, and explained why she decided to work on the front line of social work.

“I’d never considered social work before, but my dad saw an advert and suggested that I check it out, and it really sparked something in me. I knew I wanted to work with children and do something that helped disadvantaged children at home, but I didn’t know what that would look like or be.

“Seeing the advert for Frontline made me think about doing social work, and when I started looking into it, it all kind of felt very, very right, and I recognised that this is what I wanted to do. The job description really just clicked for me.”

So, is she happy with her experience of social work, after a year of training on the job?

“I won’t lie, it’s hard, but it is just so rewarding… it’s a job that’s all about relationships and people, and people are infinitely interesting. It’s a real privilege to hear people’s life stories. It’s an extremely privileged job, because people will open up a lot about their most personal details in their lives. You’re let into this secret world of their life.

“I’m not going out to make money for some CEO, I’m doing it because I want to make a difference to a child’s life, and I think Frontline provides an amazing opportunity to be able to do that.”

MacAlister is a social entrepreneur whose mind appears set on changing not just the social work profession, but assumptions about graduate life and society as a whole.

“Something that is really important for society is that more people who leave university apply their talents to public service in the broadest possible sense. If we want a society that is more equal, more mobile, and has people that better understand the nature of the challenges in the country, we need to turn the assumption in the graduate world that you go into the Big Four or into financial services, or you go into law.

“We need to turn it so that the basic norm is that people apply their talents to public service, and that it becomes something the best people are doing. The thing that’s really powerful about it is that, not only are you applying yourself to something that is socially worthwhile, you grow and develop talents you didn’t have before. This is not simply altruism, but a combination of wanting to better yourself and better society.”

In response to a query of whether social work has taken a hit as a result of some of the more negative headlines, Lord Adonis is unequivocal:

“I think that the challenges involved in social work have made it more, not less, attractive, because successful graduates know that they can make a difference in a crucial area that has been badly served in the past.

“When the opportunity is put before graduates, there is a very large pool who find this incredibly exciting and attractive, and the very fact that it is challenging is part of its attractiveness.”

Where does MacAlister see Frontline going in the future? Does he have the big employers in his sights?

“In the next five years, we’d like to be in Top 10 graduate employers. We should also have a huge network of people who are Frontline alumni who have had a shared experience in children’s social care; and are either still doing social work, or are setting up their own ventures, or are formulating policy, or are in positions of management and leadership in social work. And we’d like to bring more people into Britain’s toughest, but most rewarding, career.”

Applications for the 2016 intake are open now, and close on the 12th of November. More information can be found at thefrontline.org. 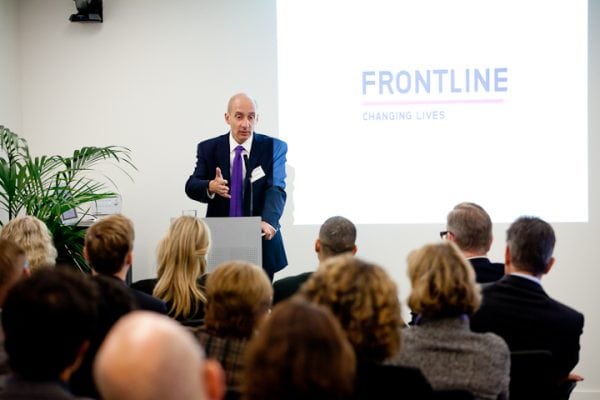