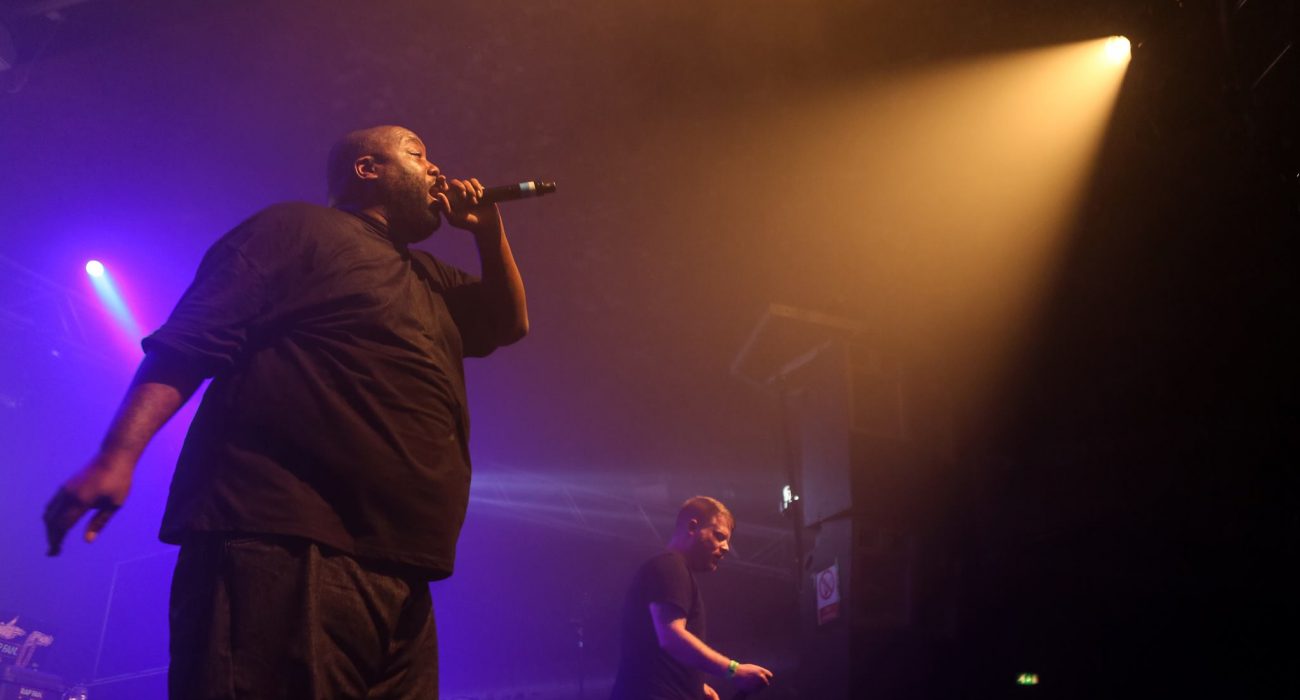 It was a night of few surprises at Store Street on the eve of Hallowe’en, with an impressive, if slightly predictable, lineup curated by Ape to celebrate their 10th birthday.

Backed by a screen of colourful visuals, Toddla T welcomes the enthusiastic crowd into Room One with a summery electro house and grime-heavy set that joyously warmed up the crowd as it began to grow. His recent, and infectiously catchy, remix of KDA’s ‘Rumble’ received a massive reaction, becoming the first track of the night that really got the crowd jumping. The decks were then passed to Shy FX, who followed with a typically heavy thumping drum and bass set, managing to throw in a few garage and jungle cuts before finishing with a rousing version of Kendrick Lamar’s ‘Alright.’

As we reached Hallowe’en, the night culminated with a powerful double headline slot between two acts that have owned 2015: the current spearhead of the UK grime scene, Skepta, against US hip hop titans, Run The Jewels.

It’s RTJ that took to the stage first, confidently flopping their pieces out, entering to Queen’s ‘We Are The Champions’, which displayed the flair for grandeur and twisted sense of humour that has come to define the New York duo. Opening with a thunderous performance of 2013’s ‘Run The Jewels’, they then began to power through a vibrant set of tracks from their excellent new album. It was a relentless set full of energy and droll crowd interaction in equal measure. Tracks like ‘Blockbuster Night Part 1’ and ‘Early’ received the reaction they deserved, impressively pulling off a really tight show that managed to still feel very fresh at the same time.

Unsurprisingly, it’s Skepta who pulled in the biggest crowd of the night, completely packing Room One to the point where moving your arms was completely impossible, and huge balls of sweat were regularly falling from the ceiling. It’s hard to argue with Skepta’s tune arsenal; he knew what the people came here to see and gave them exactly what they wanted. From the first discernable beat of ‘That’s Not Me’ to his explosive finale of ‘Shutdown’, it was a set packed with huge crowd pleasers as it is massively predictable. The problem with this, is that it offers little in the way of excitement. The room is too packed to allow anything in the way of movement, and with a crowd that seemed keener on Snapchatting the performance rather than experiencing it, it never reached its full potential.

Following Skepta’s departure, the crowd dispersed to around half the size as Preditah began his slot, filling in for Oneman. It started very strongly—opening with the filthy 2-step remix, featuring the Rocky theme tune, that has now become synonymous with his sets. But what started as a fun, inventive selection of offbeat and quirky belters quickly descended into safer territories, which effectively became more grime-by-numbers. Playing three Stormzy tracks in a row, followed by ‘Rari Workout’ and ‘Feed Em To The Lions’ offered nothing new, but in a night where grime, bangers, and predictability reigned supreme, it still went down a treat.