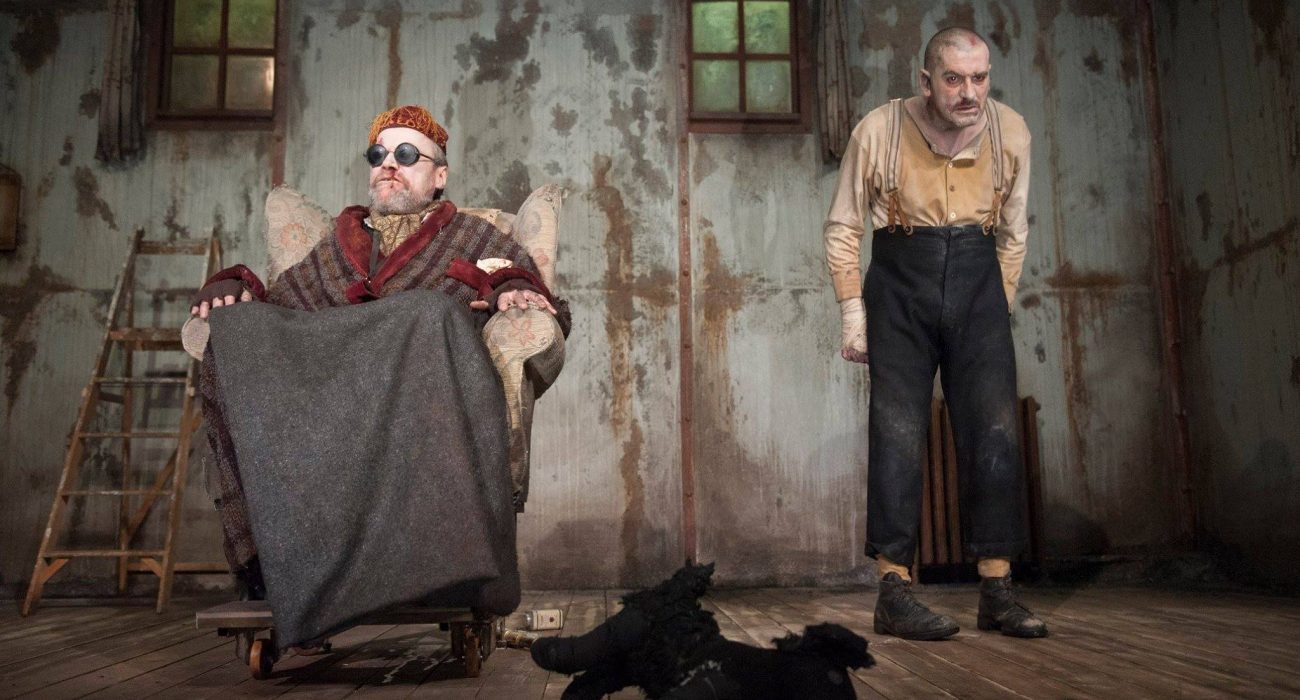 A classically British beach scene—with children playing and pensioners lounging in deck chairs—lifts up and reveals a harsh industrial box that appeared to be at the bottom of a dark cavernous pit. This is the setting for HOME and Citizens Theatre’s production of End Game by Samuel Beckett.

Endgame is centred around the demanding and wheelchair-bound Hamm (David Nielson) and his begrudging carer Clov (Chris Gascoyne), as they go through the motions of living in a post­-apocalyptic wasteland, watching their food slowly dwindle, and waiting to die.

Nielson and Gascoyne, both of Coronation Street fame, play well off of each other. With their bickering exchanges being highlights of the play, along with their use of physical comedy, they really elevated the lighter moments in Beckett’s often morbid script.

Other moments of light relief came from the humorous appearances of Hamm’s parents, Nagg and Nell, played wonderfully by Peter Kelly and Barbara Rafferty respectively. They reminisce about their past travels, whilst being reduced to living in dustbins. Their sweet and loving relationship provide a nice contrast to that of Hamm and Clov’s.

Clov’s use of physical motifs was effective in bringing the audience a sense of the repetition and mundanity of their lives in the short time we spent with the characters. Gascoyne gave a strong performance as Clov, bringing vulnerability to a character that could have easily been interpreted as simply bitter. This really helped the audience to understand why Clov hadn’t left the unpleasant Hamm, or just killed him off as he requested. Some of the most moving parts of the play were when Clov treated Nagg and Nell’s bins with such a tenderness that we saw the characters longing for love and family.

Where I felt the play fell short was in some of Hamm’s longer speeches, where it was sometimes unclear what was supposed to be an aside and what the other characters were aware of. This made these moments the least engaging, which is unfortunate, as they contained some of the more profound ideas in the play. Also, the fleeting moments in the dialogue where Hamm is affectionate towards Clov didn’t really hit home, making the conclusion of the play less moving than it had the potential to be.

That being said, the excellent use of a ticking clock in the encroaching darkness made it a poignant ending all the same, and perhaps Nielson and Gascoyne’s Coronation Street following will introduce a new audience to Beckett’s work.