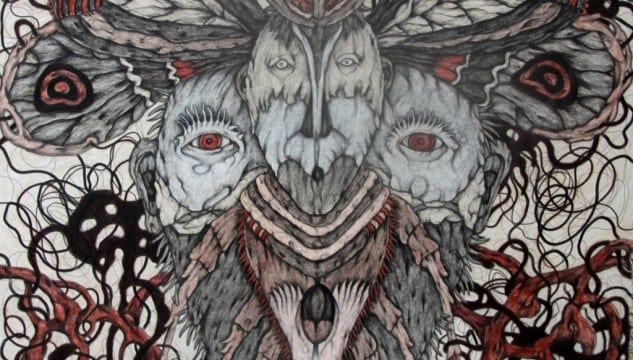 A psychiatric timetable lists one patient’s mordantly comic sessions for later that day: Sigmund Freud, R. D. Laing, Dr Prinzhorn and, lastly, Dr Death. The promise of a grueling programme of personal scruntity and overbearing psychological probing is not only felt by this poor patient, created by artist Nick Blinko, but also by the breed of artists dubbed ‘outsiders’. Their work is so often written off as the hermetic, aesthetically illegible by-product of therapy, as opposed to the more controlled, critically-sponsored world of Fine Art. Academic, artist and writer David Maclagan, a proud outsider himself, has teamed up with Castlefield gallery to create a show based around these eccentrics. Full of weird and wonderful visions, all of the works are obsessive, meticulous and more than worthy of serious attention.

The highlight of the show is the work of David Brian Adcock. He works on hand-framed boards that intertwine electronic buttons, hidden underdrawings only revealed by a probing UV light and brilliantly detailed ink drawings. They need activation to work fully as the light reveals dour asides and intricate backgrounds—the proverbial ‘outsider’ now thrives on inspection.

There is a nice selection from South African artist Marlene Steyn, including a totem-like sculpture of clambering figures and three paintings on linen. In these images, women sprout from the kneecaps and elbow joints of other reclining women; some legs are covered in thorny hairs and the spontaneous pregnancies appear sexy, pleasurable. Steyn describes her work as a metamorphosis of bodies into history, myth and psychology. Her sharply drawn anatomies pop open like the layers of shrinking females in Russian dolls; the contortion in the drawing is perfect.

The appointment card mentioned previously belongs to a series of tormented works by the anarcho-punk singer Nick Blinko. His oeuvre quite literally comes out the confines of the sanatorium as his band’s album Pope Adrian 37th Psychristiatric (1995) was reportedly composed during his residency in a psychiatric ward. The album’s punning title is illustrative of Blinko’s dark religious visions, which are placed either side of a grey institute façade—a window of which holds back small leaping lunatics in the tallest tower of the hospital. Blinko’s analysis schedule may be a witty tally of white-coated shrinks but it serves as a reminder of the imprisonment of outsider art, generically and critically. Joel Lorand’s work reflects the reclusive-hermetic streak in outsider circles. His dense works are in line with ancient Roman grotesques, another neglected form that wasn’t discovered until the accidental 15th century discovery of Nero’s Domus Aurea.

Unfortunately, it is the more acclaimed artists who disappoint. Real visionary skill cannot be affected. Mit Senoj has enough art fair credits and accolades for a successful-looking leaflet biography (whereas the brief lives of full-blood outsiders tend to read like psychiatric recovery notes, stereotypically speaking), however, his fruit-laden, vine-wrapped women are weakly drawn and unimaginative—tinned fruit versions of Arcimboldo’s bountiful portraits. Pat Darach, another serious award-winner (1995 John Moores Prize and the 1997 Jerwood Drawing Prize), has only one painting on show and it is a dull abstract expressionist plughole-spin called Well (2012). Mehrdad Rashidi’s doodles are just repetitive mind-melds of heads leaking into one another.

For those who want to uncover the secrets of these works and find out more about the fascinating curating process then Castlefield have some tours and talks coming up. On 16th April there is a in-conversation followed by a curator tour given by David Maclagan and Bryony Bond. Also, on the 20th Lauren Velnick will be talking about her uncle, the prolific outsider Christopher John Holme (1952-2010), and her recent work of cataloguing and promoting his unknown output.