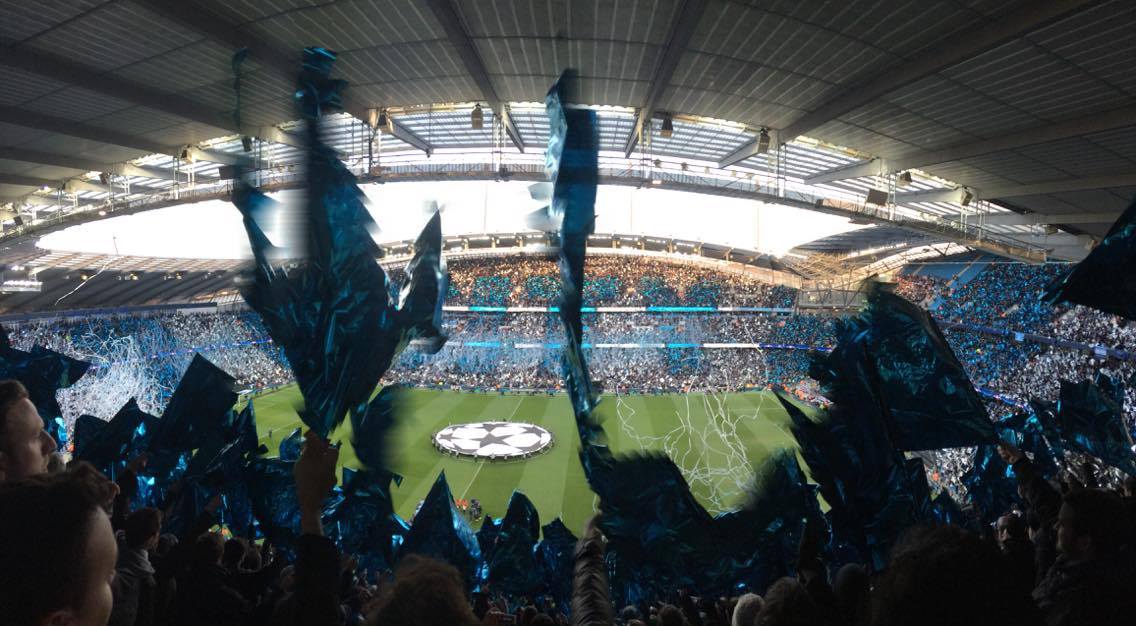 Bolstered by the news that Cristiano Ronaldo was out of the game, City fans were in fine voice for their team’s first ever Champions League semi-final. The mosaic of flags before the game was especially effective as the fans took to their seats early to sing their hearts out and wave their flags waiting for the team to come out the tunnel. And in true City fashion, as they did exit the tunnel, the fans burst into boos at the Champions League anthem. The prospect of City fans being able to do this at the San Siro in the Champions League final is certainly an interesting one.

Although it won’t go down as a classic Champions League match, the 0-0 draw at The Etihad between Manchester City and Real Madrid had its fair share of action, and a great sense of professionalism from both sides. Both sides defended very well, hence the lack of real clear cut chances, and the midfield tug-of-war brought about great performances from Real Madrid’s Luka Modrić, and Manchester City’s midfield pair Fernando and Fernandinho.

Despite the lack of chances throughout the game, it was Joe Hart yet again that saved City’s skin! The keeper pulled off two phenomenal saves: One from a Casemiro header, and another from point-blank range as Pepe shot at the keeper. Both looked like certain goals but the Englishman’s reflexes were well up to the job. Hart now has the most saves in the UEFA Champions League out of any keeper this season, and some of them have been exceptional. Despite these two chances, however, Hart was rarely tested as Fernandinho and Fernando in the middle showcased fantastic energy levels to stop the Madrid attacks. Although football fans may prefer watching the fancy flicks and back-heels of attacking players, Fernando’s game-saving interceptions and crunching challenges were just as impressive as any bicycle kick.

A first half injury to David Silva led to the introduction of teenager Kelechi Iheanacho for his Champions League debut. Despite how Iheanacho had a fantastic game at the weekend, grabbing two goals against Stoke City, his introduction meant a change in formation for City that altered the game. The 4-2-3-1 formation was working very well, as Fernando and Fernandinho commanded the midfield and Kevin de Bruyne in the attacking midfield position was creating the opportunities for the blues. The switch to 4-2-2-2, however, pushed De Bruyne to the wing and was less effective on the attack, leaving a hole in the middle.

City had few chances in the game despite their midfield efforts, as Sergio Agüero was kept quiet, but it was in the dying moments of the game when their best chance came. Substitute Raheem Sterling was put through on goal, but a heavy touch took the chance away from him quicker than the pacey winger could get there. The keeper collected.

A draw was a fair result in the end, as City controlled the first half, and Real Madrid had a better share of the ball of in the second due to Luka Modrić almost single-handedly turning the midfield battle on its head late in the second half. Real Madrid manager Zinedine Zidane stated after the game that he believed the game was 50/50. He also said plenty other things, but I was far too busy sat with my mouth open drooling at the prospect of being ten feet away from Zinedine Zidane. The crowd of journalists ooh’d each time he opened his mouth and his glistening teeth sent a ray of light bouncing off the walls. The spotlight shone off his head like it would from the halo of a footballing angel. It’s hard to believe this is the same head that sent Marco Materazzi toppling to the ground in the 2006 World Cup. I know it wasn’t your fault Zizou… I know.

The performance was professional and astute, handsome and suave… Oh, sorry, I’m thinking of Zinedine again. Yes, the performance was professional from Manchester City and they managed to keep the all-important clean sheet at The Etihad. Both managers stressed in the post-match press conference that neither team is favourite to go through to the final, but City will feel confident after keeping Madrid out for 90 minutes already. We’ll all have to wait another eight days to find out though! It’s fun, this Champion League malarkey, isn’t it?