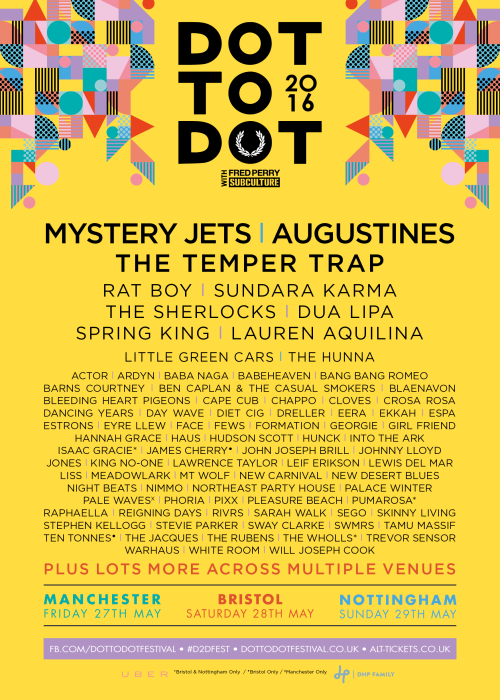 Various venues across Manchester on 27th May

Excitable flocks of eccentrically dressed music fans migrate from venue to venue, all dotted about the trendy environs of the Northern Quarter for this year’s Manchester stretch of Dot to Dot. The pressure is on for bands to dazzle the punters as soon as they arrive. As a rule, first impressions are rather misleading. Traditional gigs rely on the casual ebb and flow of old and new material, so you can forgive some of the acts for seeming a little high-maintenance. Such anxieties aren’t a problem for the larger acts, guaranteed to draw in the masses and the under-18s: the number of Sundara Karma fans can easily be identified by the many appearances of t-shirts emblazoned with their name throughout the day.

It explains the wealth of self-assurance that rising star Ratboy exudes from the Manchester Cathedral stage. He has plenty of chutzpah, if not charm, unloading upon the young, enthusiastic crowd a rambunctious squall of Home Counties hip-hop—let’s call it ruffian rap-rock—with Blur-sized pop hooks and corrosive riffs. Often labelled 2016’s answer to Jamie T, albeit without the wit or pathos, he comes closer to being Johnny Rotten’s annoying kid brother. You can’t deny its power, however, and he is clearly adept at what he does, with the adolescent audience eating out of his palm: only he can get folks lobbing beer cans in a cathedral. It sets the tone for much of the festival; regardless of what the critics say, guitar music appears to be in rude health, at least according to DtD.

That said, there are minor delights on offer, usually hidden away in the smaller venues, secret enclaves where the magic happens. Bleeding Heart Pigeons’ peculiar and enchanting alt-rock manages to overcome the asphyxiating heat of the Castle Hotel, transcending its cramped space with its capacious drama. Despite the intense intimacy of the gig – Mícheál Keating receives his second guitar from someone in the audience – the trio translate something fraught and epic, Echo & the Bunnymen as covered by three shy Irishmen. After a couple of false starts in the form of bass amp problems, the genesis of some mild antagonism directed at the sound guys (“Is that a thumbs-up or a middle finger?”), Blaenavon start off like a wonky Editors, morph into an angstier Jaws, and end up sounding like neglected post-punk understudies Dif Juz. Their applause over at the Ruby Lounge is thoroughly well-deserved.

Not everything is as thrilling as that. Tucked away at Mint Lounge are Girl Friend, who specialise in flat, unashamedly 80s synthpop and tinny guitar solos. Watching them is like watching a low-rent Summer Camp: siblings Amory and Eleanor sing passionately if slightly apart, like two lead singers in two different bands. Behind them, two quiet men (one keyboardist, one guitarist, both duty-bound to their laptops) steer their cheap, chintzy racket. Elsewhere, there’s Diet Cig, purveyors of enormously charming punk-pop, the trebly ying to Japandroids’ beefy yang. Frontwoman Alex Luciano is tirelessly exuberant (sometimes to a fault), a far better energy source than fossil fuel. Yet the onslaught of distorted guitar and brisk, crashing drums gets marginally wearying, especially since that’s what the bedrock of DtD appears to be. Northeast Party House’s ferocious Nirvana-esque grunge-disco is more fun and rowdy than Funeral Party (yeah, remember them?) They have the cowbells, if only they had the tunes: the lack of subtlety thuds away like a blunt instrument.

Thank heavens for Soup Kitchen, where two festival highlights threaten to steal the show. First up are West London’s Babeheaven, whose sound imagines Sade reincarnated as Mac DeMarco; it’s R&B that’s woken up from the night before, still drowsy and dreamy. They play both singles (great) and b-sides (even better). It helps that they’re blessed with some self-effacing humour. Lead singer Nancy (sans surname), having difficulties with her mic stand, opts to hold the mic instead, an undertaking she claims never to have done before: “I feel a bit vulnerable,” she quips.

Just as good are Denmark’s Liss: in short, they are a revelation. There’s more slap bass here than the Seinfeld theme. Søren Holm’s vocals unmistakably recall that of Prince, somewhat cheering in the wake of his recent death. Not only that, but the quartet (plus a mysterious fellow on a set of drum pads) evoke the period of Prince’s career when he drifted away from his taut machine-funk towards smouldering, soulful pop. This isn’t the last 2016 will hear of these sublime Scandinavians: labelmates Jungle will be anxiously looking over their shoulders.

The evening ends, more or less, with Spring King, a dated, guitar-heavy offering whose most obvious reference points are the Damned and hoary garage rock. It is the deafening, anaesthetised sound of guitar music’s death. Presumptuous? Perhaps: we still have Field Music and Tame Impala, ostensibly guitar bands. DtD, for all its flaws, succeeds in unveiling new exciting talent; though, absences from the Japanese House and Cigarettes After Sex are sorely felt, and it will have to dig deeper for more compelling acts if it is to fly the flag for alternative music in coming years. Maybe, with bands like Babeheaven and Liss, a sea change is on its way.