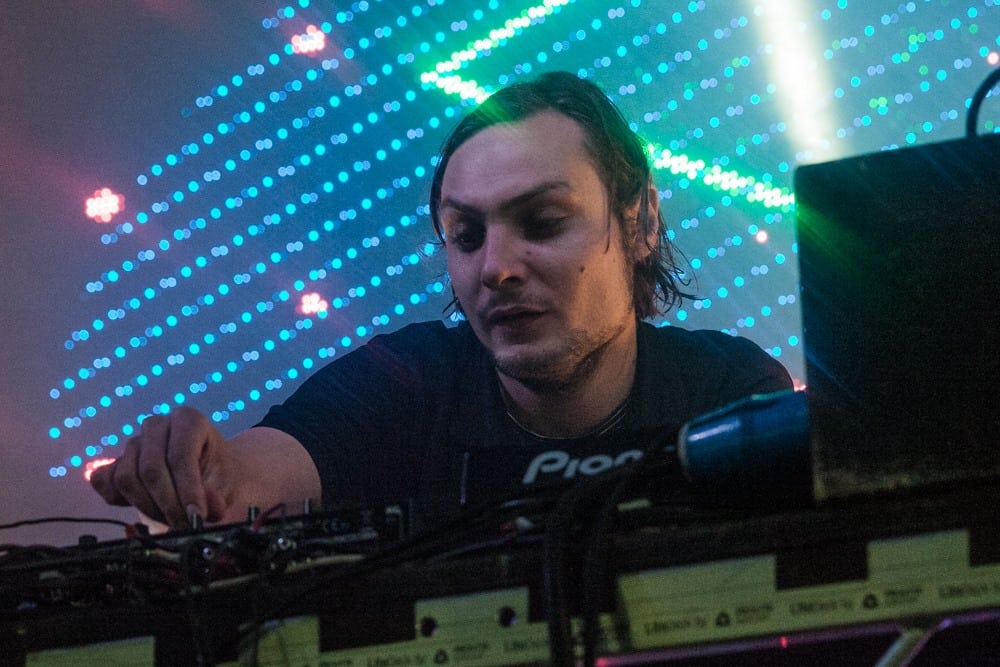 There we were, chilling in Victoria Park at midday, scrutinising the clash finder and anticipating the day ahead. Then the heavens opened.

This wasn’t just a quick shower, rather the sort of torrential rain that soaked you to the bone in 30 seconds, and left your feet squelching inside your shoes.

Opting to take shelter, we unfortunately had to miss Norwich’s eerie experimental duo Let’s Eat Grandma, who have been hotly tipped by the critics. We also had to miss the Senegalese Afro-Cuban style band Orchestra Baobab, who were playing on the main stage that had no shelter from the elements. Instead we header for the Resident Advisor stage, where we caught the last hour of DJ Koze, and a follow-up set from Roman Flügel. While the former suffered somewhat from some lacklustre deeper sound in the cavernous tent, Roman Flügel more than made up for it with some more glitchy African influenced beats reminiscent of his fantastic track ‘Sliced Africa’. Above all both DJs did a great job at recovering our spirits after the downpour that had threatened to ruin the day from the off.

The day really got going however with Motor City Drum Ensemble’s masterful set over at the Bugged Out! stage. From the off Danilo Plessow had the crowd like putty in his hands, with a perfect combination of elusive disco hits and tracks that landed the funkier side of house. The groovy ‘Soccer Dancer’ by Ginio was a sure crowd pleaser, but we never expected him to edge it into the sizzling ‘Jump Bugs’ by Cyclops, which was the real highlight of the set.

Following MCDE we made the painful decision to miss The Black Madonna in order to catch the first and only UK set of Ata Kak. Ata Kak’s backstory is as amazing as his music. A Ghanian expat in Canada, Ata Kak self-released a cassette in 1994, the oddity of which spurns genres. At a push could be classified as a crazy blend of reggae, dancehall, rap and afrobeat (furthermore the whole thing is artificially sped up to a frenetic tempo). Brian Schimkovitz discovered the cassette in 2004 and uploaded it to his Awesome Tapes from Africa blog several years later. After an unsuccessful search for several years to find the man behind the record, he was eventually successful, and in 2015 he rereleased the record on his label to critical acclaim. Fast-forward to 2016, and Ata Kak, who was working as a taxi driver in Canada, is touring his cult record for the first time nearly 20 after its release. This show at Field Day was a UK exclusive on his very short European tour.

Thankfully it didn’t disappoint; Ata Kak tore through the album and sent the Moth Stage crowd into a frenzy. ‘Obaa Sima’ and ‘Daa Nyinaa’ in particular really stood out from the album, but the receptive and appreciative atmosphere of the crowd surrounding the show far surpassed the music itself. You couldn’t help but feel over the moon for Ata Kak; I’m sure he never imagined over 20 years after his record fell on deaf ears to be playing to a packed tent at a London festival all the way across the world. He may have been a taxi driver back home, but in London was a rockstar.

Over on the main stage, Yeasayer played a strong set that fused their recent album Amen Goodbye with their strong back catalogue. The jagged ‘Silly Me’, along with accapella infused ‘Dead Sea Scrolls’, really stood out from the new album, but it was the old hits in the form of ‘Madder Red’ and ‘O.N.E’ that really got the crowd going.

At this point, it’s worth mentioning the brewers market at Field Day. Gone are the days of wincing as you hand over a fiver for warm urine (Carling) in a paper cup. Field Day’s brewers market featured a host of independent breweries selling craft beer, including Gypsy Hill, Howling Hops and the local 5 Points Brewery (from just round the corner in Hackney). While the drinks may have still been pricey, the beer was delicious and clearly a lot of effort had gone into it. This should be the precedent for all festivals, and who knows, maybe it will be in a couple of years time.

Gold Panda eased us into the evening, with some slinky Japanese soaked beats from his new album Good Luck and Do Your Best. Alongside excellent tracks like ‘Chiba Nights’ and ‘Autumn Fall’, his impeccable light show fused with the music to create a perfect atmosphere for his set. It was a shame not to hear ‘You’, but if anything the show proved what a strong album Good Luck and Do Your Best is. Definitely try and catch Gold Panda this festival season if you get the chance.

Four Tet is normally one of the acts we’d be most excited about catching at a festival. Despite his sets becoming slightly more predictable and familiar, his fusion of genres and styles never fails to impress. Rather strangely he was playing on the main stage, which unfortunately didn’t work in his favour. The open daylit setting jarred with types of music he was playing out. While tracks like Steve Be Calm’s ‘Never Come Back’ may have got the crowd going slightly, he would have been much more suited to one of the much larger indoor arena tents like the Resident Advisor stage.

To make up for this disappointment, we caught a bit of the extraordinarily busy ‘Summer 08’ DJ set, by Joe Mount of Metronomy (named after their upcoming album). The rather strange surroundings of the Jägerhaus stage were about as strange as the set itself, in which Mount played some of his own tracks, such as ‘Radio Ladio’, and sand over them. Judging from the new material he played however, July’s new album is set to be fantastic.

Like the rest of the acts playing throughout the day, when it came to the headliners we were spoilt for choice. We opted to try and catch two, the first being Danny L Harle over on the Fader Stage. His freakish PC Music style may not be everyone’s cup of tea, but we thought it was a lot of fun. An early of drop of the Barbie Girl-esque ‘Hey QT’ saw the small crowd that had gathered to witness the set lose their shit from the off. It anything it convincingly demonstrated that PC Music has moved away from the irony factor and is comfortable as just extremely weird yet infectiously fun. After moving hit set into what sounded like the Eurodance sounds of Magaluf nightclub circa 2008, Harle’s own track ‘Broken Flowers’ brought the set to a neat close in a move that saw Harle step out from the decks and dance amongst the crowd.

With the madness over, we shuffled the short distance to the Bugged Out! stage to see Italian duo close Tale Of Us. A much more serious state of affairs, the thumping Fango ‘Rectum’ ferociously sucked us into the rhythm of the set, before their own elevating track ‘North Star’ set our hairs on end.

Reflecting on the day on the long train home, its clear that Field Day had all the ingredients for the perfect day festival; a beautifully diverse line-up that is the perfect blend of bands and DJs, amazing artisan food and drink and a “big day out” atmosphere to boot. Not even the freakish monsoon rainstorms could ruin it.