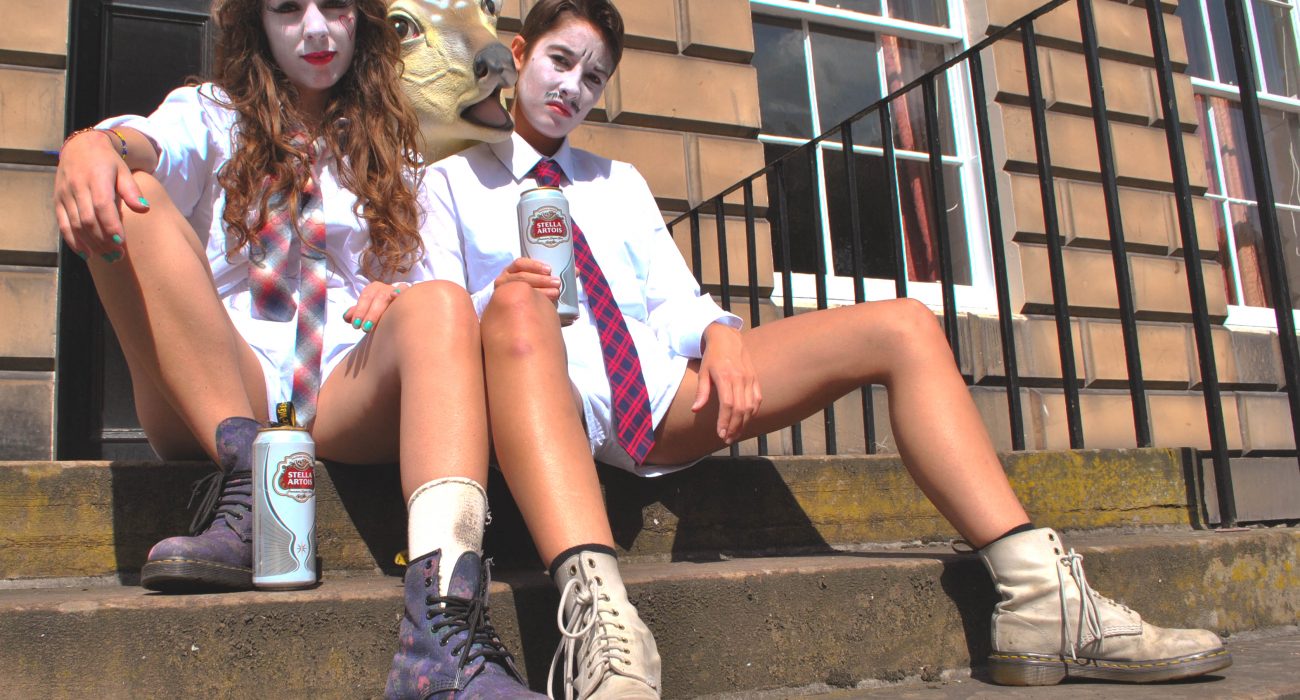 Women’s Hour is a play presented by Sh!t Theatre (also known as Becca Biscuit and Louise Mothersole)—a misnomer that is quite appropriate, given the amusing and self-deprecating content that the female duo present.

The play is an honest discussion of what it is to be a woman today, made more effective by the lively, interactive and inviting performance by Becca and Louise. The hour is jam-packed with the mocking, sharing, laughing and dancing.

As we enter the theatre we are greeted by two females dressed in shirts, ties and boxers drinking beer and dancing to Dolly Parton’s Potential New Boyfriend—this song is to be repeated countless times as the duo dance around in a vaguely choreographed manner. I wonder at this point whether previous audiences sang along to the music, as after the first three plays I certainly knew at least a verse off by heart.

Once they have sufficiently warned the audience about their potential new boyfriends, the show begins. The lights go down, and the duo leaves the stage and re-enters, comically shuffling into position. The show’s structure loosely follows that of a morning TV show (except the theme song is a synchronised dance routine to Mambo No. 5) as they discuss some headlines with a satirical and painfully truthful edge. I had not read the news that morning, but I soon learned about L’Oréal’s new slogan—’L’Oréal- ‘cause real ain’t worth sh*t”—and the current fad of mink eyelashes, tusk teeth and tiger head face.

What I enjoyed about Women’s Hour is that none of the candid truths of being a woman were lost in the characters, odes and parodies employed throughout the show, but they became more palatable to the whole audience. What better way to lament the unpleasant side effects of periods and the weight obsession that society projects onto women by putting it into a remixed version of Talk Dirty to Me?

We also have the pleasure of meeting the German CEO of Kinder who launches the new range of gendered Kinder Eggs; the pink eggs contain gifts of a pony, tampon and a sign reading “you’re fat.” Later on in the hour we watch an interview with a female serial killer who angrily denounces the sexualisation of her and her counterparts: “Focus on our terrifying body of work, not on our bodies.”

However, the pair did not joke their way through the whole 60 minutes. Every so often the stage would black out and they would each give a monologue about an issue that has affected them personally. The first time round, Becca speaks in a sombre manner about the meticulous daily routine that includes checking various aspects of her appearance and her weight.

Another of the highlights of Women’s Hour was the ingenious way in which Becca and Louise introduced the discussion of the infamous tampon tax. The two women took an onstage break, complete with a cup of tea, and engaged in a discussion with the audience about what they consider to be a luxury. They then share their personal indulgences: “After a hard day of tiny sugar cake decorations [one of the many items that are classed as an essential item, alongside some other kitchen staples: exotic meats and tea cakes], treat yourself to a tampon.” A hilarious string of scenarios in which the girls reward themselves with tampons ensued.

Sh!t Theatre excels in the task of explaining the essence of being a woman in just one hour; the show is filled with cutting, crude and carefree comments that are coated in dance routines, alter egos and spoofs.  I would most definitely recommend experiencing one of Becca and Louise’s productions, for a quick game of crumpet volleyball to the soothing sounds of Mambo No. 5, at the very least.