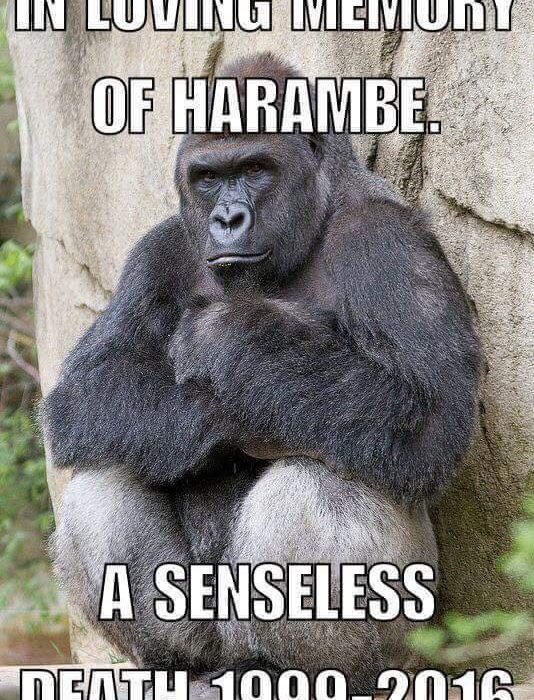 Harambe and the magic of memes

At the beginning of the year, 2016 looked like it would be like any other. We would celebrate all the traditional festivals such as Easter, the Summer Solstice and Ed Balls Day all without incident. We knew the referendum was around the corner but we did not pay much heed to it. And then, something happened. Our world started to become increasingly surreal. The world of the Internet started to leak through into real life and real life began to shape the online world immeasurably.  I speak, of course, of memes. Memes have for many become a tangible and unavoidable part of everyday life.

I start with the hero of 2016. A true martyr who died for us and who has been shown such levels of love on the internet that the appreciation for his life is now becoming part of the zeitgeist. Everywhere, people know his name. We all remember where we were, at 4pm EDT 28th May 2016, when we found out Harambe had been killed at Cincinnati Zoo.

Harambe, who has since gone on to conquer the internet, was not just a gorilla. He was you. He was me. He was humanity. He was all of us. Whether lowland gorilla, human or orangutan. He gained such popularity that not only is there a Wikipedia page about his death, but also a page dedicated to making memes about him, which has been mentioned in many mainstream publications.

The murderers at Cincinnati Zoo have requested that these memes stop, but that will only encourage more memes. Harambe did not die for nothing, you know. In fact, people still shout dicks out for Harambe at passing television cameras and there was a candle lit vigil for him in Manchester and in other places across the globe. Such things are even banned at one US University, as he is considered a symbol of male oppression. How much acid they were on when they made that link god, or Harambe, only knows.  But the biggest indication that Harambe has transcended mortality, the Internet and even popular culture, is the fact that 11,000 people voted for Harambe in the US election. 11,000 people wisely put their cross next to a gorilla, who were he still alive, would probably have achieved world peace and global enlightenment.

But we have also seen the evolution of other forms of memery. Pepe the Frog, a cartoon character form a comic called ‘Boy’s Club’ and adopted by 4chan, has not only become a meme, but for some also a symbol. Depending on who you ask, they will give different answers. Many on the alt-right will say Pepe is an intrinsic part of their meme culture, there to poke fun at their political adversaries, proclaiming their love of the meme with the phrase ‘Praise Kek!’ Some people actually believe that he is the incarnation of an Egyptian god who has been sent to deliver us from evil. Then, there are those who see him as a hate symbol, following certain racist cartoons being made either using him as a base for their illustration or with racist wording.

The US Anti Deformation League has called him a hate symbol and encourages people not to use him as a meme. Yet he persists. His memes formed a major pillar of Donald Trump’s online campaign for the presidency, otherwise known as ‘The Great Meme War 2015-16’. Eventually, Hillary Clinton was going to have to address it. In a campaign rally, some months ago, Hillary Clinton called out the alt-right and their use of racist symbols, to which a man in the crowd can immediately be heard shouting “PEEEPEEE!” at the top of his lungs. Pepe has not only managed to breakout from 4chan, but he has broken out of the conventional realms of the Internet.

But these are all relatively old examples. The Internet moves at a thousand miles a minute and while these memes reached their peak about a month or two ago, to the Internet, that is a lifetime ago. In the weeks immediately following Trump’s win, a new meme began to take shape, a whimsical and harmless meme in which we could all share enjoyment. It was the series of Biden/Obama memes. These memes, inspired by lines from the always hilarious film ‘Step Brothers’, gained such traction and captured our imagination to such a degree that they became a news story in their own right. Suddenly, CNN, NBC, ABC and other US news networks were talking about the memes, reporting on them and writing articles about them. What kind of a world do we now live in that memes, once the preserve of a few niche corners of the internet, are now mainstream news? What has happened in 2016 that has brought about such shattering change?

The answer is simple my friends: the world has been turned upside down. With the new digital age, and the increasingly uncertain world in which we live, the world is becoming a much nastier, scarier, more bleak place. Yet, amongst the calamitous situation in which western civilisation currently finds itself in, we can take refuge in the realm of memes. They can make us smile when we think all hope is lost. So I say simply this: keep memeing away, and it might not be so bad.