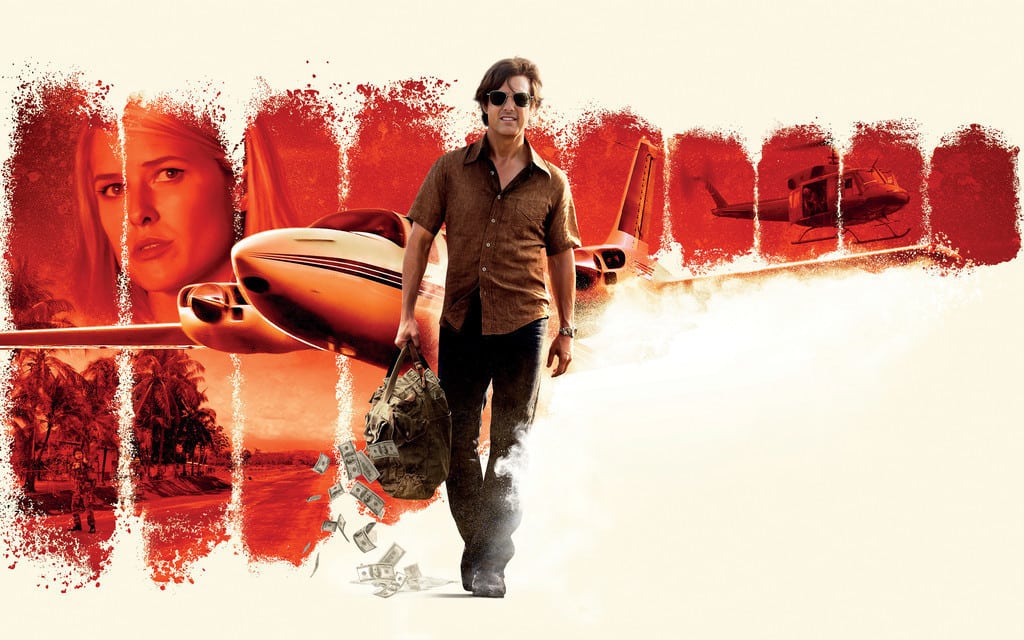 American Made sees Tom Cruise and director Doug Liman reunite in an adrenaline-fueled tale of former Trans World Airline Pilot Barry Seal. Had this been a work of pure fiction, writer Gary Spinelli would be slammed for the unrealistic twists and turns the plot takes. But the film is surprisingly grounded in truth. From smuggling drugs for Pablo Escobar’s Medellín Cartel to running guns for the CIA to Central America, Seal’s story was destined for a big screen portrayal.

His initial descent into smuggling was to add excitement into an otherwise humdrum life, whilst also earning some extra money for his family. As so many true story rise/fall films before this, the protagonist begins chasing the American dream before their greed leads to their inevitable downfall.

After a few years, Seal has so much money that the local bank dedicates a vault solely for him yet this does not stop him from continuing. The question as to why is left perpetually unanswered, is it more money, notoriety, thrills? Even his passion seems to slowly die as time progresses.

Eventually, he is arrested in a ludicrous scene in which every law enforcement agency in America raids his hanger at exactly the same moment, with one member from each helping to take him. The events that follow include a Presidential intervention, Harley Davidson Motorcycles, and the charity Salvation Army. Any attempt at an explanation would be fruitless in a bizarre climax to the film. One that leaves both Seal and I questioning our sanity.

Very quickly, the repetitive formula of the film became monotonous and tiresome. He’ll get caught in an act red handed but miraculously escape every time with a smile, while simultaneously digging himself a little deeper into the crime world.

Equally frustrating was the incredible wealth Seal accrued without spending it on anything more lavish than putting in a pool. Part of the thrill of similar films such as The Wolf of Wall Street was seeing Belfort’s drug fuelled escapades. The craziest moment during Seal’s free time comes when he takes a shot of Tequila at a garden party.

American Made offers up little to show the consequences of his actions, fuelling both a drug war in Miami and a rebellion in Central America. His pivotal role in the rise of the Medellín Cartel will have indirectly cost the lives of thousands but this isn’t mentioned. Alternatively, Liman could have made a critical political commentary of Reagan’s reign or the CIA but opts not to. Instead, he relies on the charm of Cruise and a breakneck narrative pace to disguise the lack of any real underlying meaning. The journey is undoubtedly an entertaining one, but American Made, like Liman’s last project The Wall, is destined to be forgotten.

Peculiarly, director Liman has a person involvement with the resulting Iran-Contra scandal. His father Arthur L. Liman was chief counsel for the Senate investigation into the events and questioned Colonel Oliver North in the public hearings — a man who appears late on in the film.