Valve Cracks Down on Metabombing

‘Metabombing’, more widely known as review bombing, is a relatively young phenomenon, but one that is becoming increasing common and, more importantly, increasing influential. Metabombing is the practice of negative reviewing en masse in response to something a developer or publisher has done. It invariably takes place on metacritic or steam, as they are the platforms which put the greatest emphasis on user reviews.

This is different from simply reviewing the game negatively due to not liking it. Metabombing is an organised movement (usually initiated by online communities like Reddit or Steam forums) that attacks games for one issue in particular rather than the quality of the game in its entirety.

There are a number of examples of this. Most recently, 2K’s basketball game NBA 2K18 was metabombed for its excessive use of microtransactions and its ‘pay-to-win’ mechanics. Grand Theft Auto V was also review bombed recently for issuing a cease and desist to the makers of popular online modding tool OpenIV. It currently sits at a lowly 64% approval rating on steam – a dire state of affairs considering in March 2017 it was ranked the sixth best game on the platform. 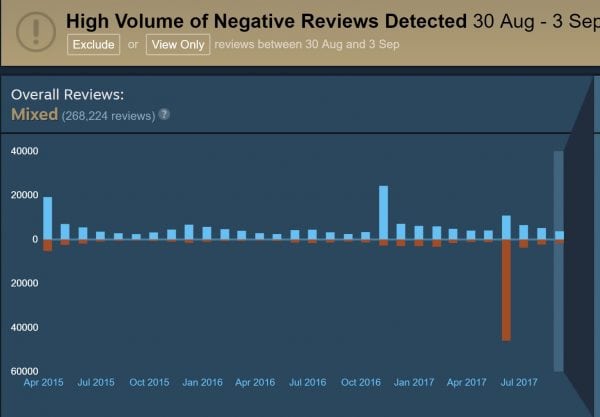 These are arguably examples that are closer to conventional negative reviews, as they criticise issues that pertain directly to gameplay. There are examples, however, which are arguably less judicious.

Chief amongst these was DOTA 2, which was review bombed in 2013 for not being Half Life 3. Yes, that’s right – DOTA 2, a generally popular and consumer-friendly game, was attacked for not being the sequel to 2004 cult hit Half Life 2.

Elsewhere, indie title Firewatch was review bombed by the so-called “Bro Army” after developer Sean Vanaman issued a DMCA takedown (copyright strike) against PewDiePie’s Firewatch gameplay videos, whilst Horizon Zero Dawn was attacked by Zelda fans in an attempt to make it hold a lower aggregate score than the concurrent Breath of the Wild.

Although the games subjected to these more bizarre metabombs were not affected as significantly as GTA and NBA 2K18, the practice remains problematic.

On the one hand, it grants a genuine collective voice to consumers who often feel ignored or disrespected by developers. It also offers a way of gaining a corporation’s attention over a particular issue by attacking their potential profits – bad reviews put off prospective buyers – and their professional pride. This was particularly the case with Rockstar, who take a lot of pride in releasing games that are critically acclaimed. They eventually altered their stance on OpenIV.

On the other hand, it is a system that can clearly be exploited for unrelated, bizarre or unethical reasons (Mass Effect: Andromeda, for instance, was metabombed for apparently being on the side of ‘social justice warriors’).

Earlier this month, Valve introduced the first countermeasure for review bombing on Steam, enabling viewers to break down review scores by date in order to see huge anomalies in scores. This solution has not been universally praised but does well to maintain a democratic review system whilst at least exposing a metabomb, if not preventing it. In this way, the consumer maintains the power to critique en masse, but also to analyse negative or unrepresentative trends as an individual.