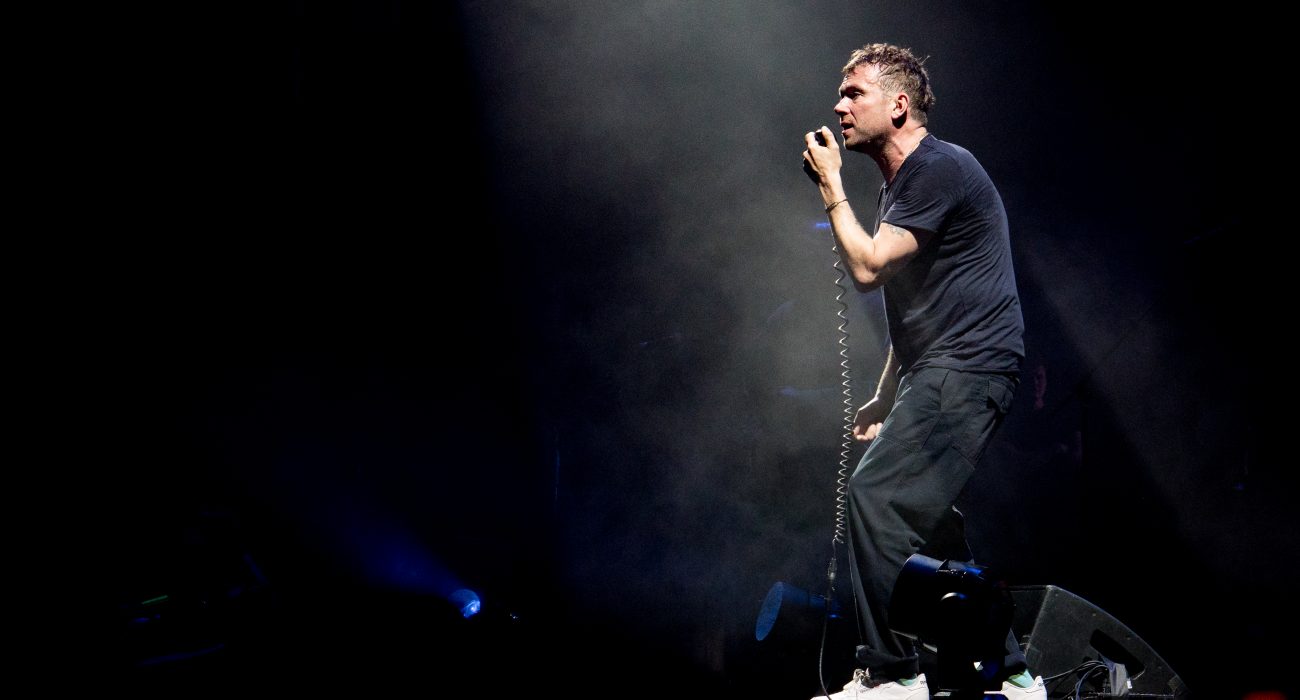 It has been 7 years since genre-defying band Gorillaz last played Manchester Arena and their long-awaited return certainly lives up to expectations. The show is led and coordinated by co-founder and Blur frontman Damon Albarn but is by no means dominated by him. He is joined by a host of acts, including Little Simz, Vince Staples, and two-thirds of De La Soul, as well as a vast crew of musicians — notably a whopping 6 backing singers and two drummers.

The set opens with ‘M1 A1’, the unnerving sample from ‘Day of the Dead’ ringing through the Arena- “hello, is anyone there?” The audience is already entranced, their voices echoing in eerie unison during ‘Last Living Souls’.

Predictably, ‘Dirty Harry’ is a hit, with Albarn backed by a choir of cartoon children on the screen. Bootie Brown joins the stage to perform the rap section as the crowd reaches peak excitement.  Setlist staples ‘Feel Good Inc.’, ‘El Manana’, and ‘Demon Days’ are equally well received.

Gorillaz no longer rely on gimmicks for their live show, instead using old music videos featuring the virtual band, some in full and some spliced together, with glitches and clips of artists who could not be present. Mad light shows, pyrotechnics, or dancers just aren’t necessary. The graphics are a spectacle in themselves, as are each of the acts that join the stage.

The full original music videos are used to accompany ‘Stylo’, ‘Clint Eastwood’, and mellower ‘On Melancholy Hill’, when Albarn steps back into centre stage to show off his vocals. He says little in between songs but has never been on such good form so the audience don’t seem to mind.

Tracks from Gorillaz’s newest album Humanz are just as well received as older ones. American rapper Vince Staples takes over the Arena to front ‘Ascension’, working the crowd into a whirl. It is repetitive but by no means dull as Staples brings never-ending energy to the stage.

Similarly, ‘Sex Murder Party’, performed by Jamie Principle, Zebra Katz, and Albarn is outrageously brilliant and surreal. Principle climbs into the crowd while Katz struts and jumps about in a shiny silver boiler suit for a full seven minutes.

The biggest hit of the Humanz era, ‘Saturnz Barz’ fills the Arena with ear-splitting bass and hard-hitting beats. Despite the fact that the performance relies on pre-recorded sections from Jamaican dancehall artist Popcaan, it is a clear favourite with the crowd.

Inevitably there are some tracks missing from the setlist, notably Demon Days track ‘DARE’ featuring Shaun Ryder, yet the 28 songs that are played are faultless and the show is mesmerising. Gorillaz was created almost 20 years ago but Albarn and Co. show no signs of slowing down; the hype is sure to continue for years to come.