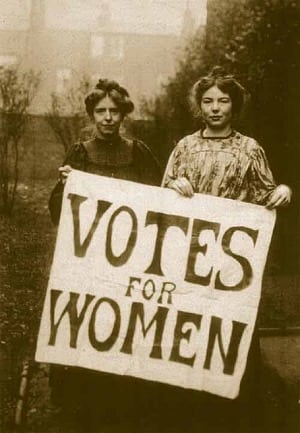 Votes for Women (labelled for reuse)

The 100th anniversary of womens’ suffrage with Baroness Hale

On the 8th of February, the accomplished Baroness Hale of Richmond, President of the Supreme Court, returned to the university that she taught at from 1966 to 1984 to deliver a compelling talk on the achievements of women in the past a hundred years.

Baroness Hale has been a “woman of many firsts”; first woman President of the Supreme Court, first woman Lord of Appeal in Ordinary, first woman to be appointed to the Law Commission, and the first person to make High Court judge as an academic and public servant rather than a practising barrister. On this occasion, she was commemorating 2018 marking the centenary of some women’s right to vote and the right of women to stand in Parliament, as well as the 90th anniversary since all women gained the right to vote.

Margaret Haigh Thomas, Lady Rhondda, was a leading equalitarian feminist in her day who founded a pressure group called the Six Point Group, a feminist journal, and who went on hunger strike after being imprisoned for committing arson during her work as a militant suffragette. She also fought to obtain her wrongly denied place in the House of Lords appointed to her by her father. Moreover, Baroness Hale’s mother was part of the first generation of women who obtained the right to vote and whose hard work exemplified a generation of women who were moving away from the “expectation of dependence to beginning of independence”.

Baroness Hale then spoke on modern day sexism and the difficulty that women in the work force find between the need for positive discrimination, which attempts to decrease institutional sexism, and our desire to be “appointed on merit not a statistic”.

The talk was incredibly poignant and inspiring, and Baroness Hale is a role model to women whose job as President of the Supreme Court hopefully showcases the beginning of an end to institutional sexism. After this excellent talk, what has become clear is that women still have a long way to go until we reach a much desired equality. Even though the last a hundred years have made a significant change, women still face discrimination in every aspect of their daily lives. As Baroness Hale said: “the women suffrage movement knew we needed equality and we should share that conviction”.