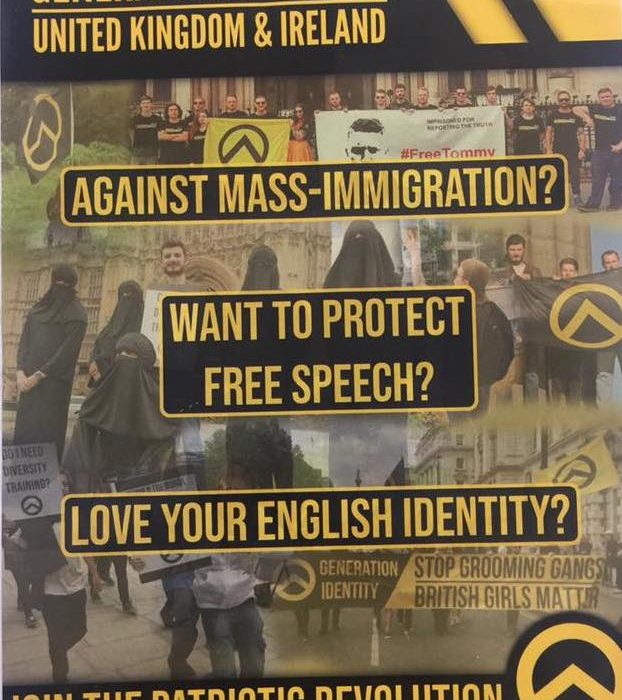 Anti-immigration stickers have been placed across campus by far-right group Generation Identity.

The stickers, which appeared across Oxford Road on Monday afternoon, called for readers to “Join the patriotic revolution.”

The text on the stickers read: “Against mass immigration? Want to protect your free speech? Love your English identity?”

The words were set against a backdrop of pictures including figures in burqas standing outside the Houses of Parliament. Another picture showed a protest to free far-right activist and ex-English Defence League leader Stephen Yaxley-Lennon, also known as Tommy Robinson.

A tweet from the Generation Identity North West twitter account showed stickers placed around the University of Manchester Students’ Union. One was pictured under the ‘Safe Space’ sign on the top floor of union. Another was stuck on the mural that the Students’ Union exec painted over with a poem by Maya Angelou during the summer.

“As an institution, we are proud of the University’s diverse staff and student body and will continue to promote a message of inclusivity across campus.”

A student-led protest took place on Wednesday afternoon in response to the stickers. One of the organisers, Conor Cooley,  third-year Maths student and student campaigner for Stand Up to Racism told The Mancunion:

“Generation Identity is a fascist and deeply racist group. Given that they have been putting stickers up across our university, we think it is really important to have a really public message and show that we don’t believe in and support that kind of ideology and we want a more welcoming atmosphere for the university as a whole.

“Protests like this can really make a difference to students who might feel attacked by these stickers”.

Generation Identity describe themselves as a “Pan European Patriotic Identitarian movement”. The group started in France as the youth-wing of the far-right Bloc Identitaire. The group has factions across Europe, prominently in Austria, Germany and Italy.

The UK and Ireland branch was launched in October 2017 after Generation Identity hung a banner from Westminster Bridge in London, reading “Defend London, Stop Islamisation.”

Their website describes their main aims as: “Stop the Islamisation of Europe,” “Oppose globalisation,” and “Stop and reverse the Great Replacement.”

In March 2018, identitarian writer and prominent Generation Identity member Martin Sellner was barred from entering the UK. He was due to give a speech at Speaker’s Corner in Hyde Park, London. His girlfriend, Brittany Pettibone, was also barred.

Regarding the incident, a Home Office spokesperson said: “Border Force has the power to refuse entry to an individual if it is considered that his or her presence in the UK is not conducive to the public good.”