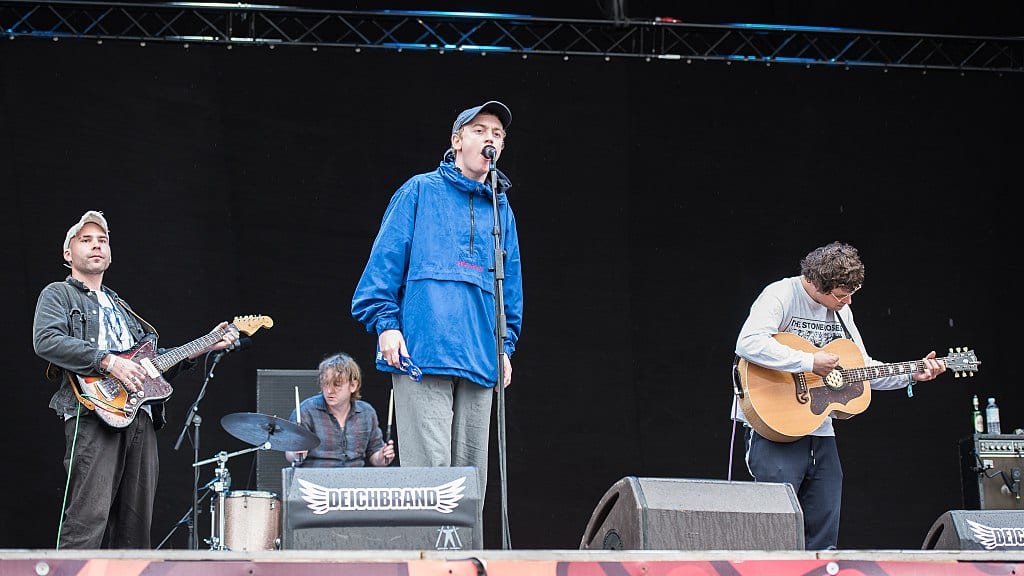 The problem with bands like indie favourite DMA’s is not that they’re bad — the acoustic sound of their guitars blends beautifully with not-awful vocals; the problem with bands like DMA’s is that they are intensely boring. Their December show at Victoria Warehouse began with debut album favourite ‘Play It Out’, and within the first three seconds a flare had been lit and mosh pits begun.

I couldn’t help but wonder what the crowd was moshing to — the song had very little steady rhythm and no drops. While there was no denying that the majority of the crowd seemed to crave the Gallagher-esque crooning of lead singer Tommy O’Dell, it was hard not to wonder if the band would have the same appeal if they didn’t fit the formula of ‘90s style male Britpop band with parkas and blunt fringes’. While the first couple of songs offered guitar riffs and a dance, by the fourth repetitive track, I came to the sinking realisation that DMA’s had about as much variation as their fanbase.

What struck me in particular was the desperation for the band to sound like the familiar tunes of Mancunian Britpop. The cynic in me couldn’t help but wonder if it was purely for marketability and profit-making purposes: the formula is tried and tested. As the band launched into lead single ‘In the Air’, it was understandable why you’d find them appealing.

However, it wasn’t special and it certainly wasn’t new. It drew easy and obvious comparisons to ballads from – you guessed it – Oasis, such as ‘Stop Crying Your Heart Out’. There was a generic quality and blandness to DMA’S live performance that while having mass appeal to the indie market, felt shallow and vapid.

The willingness for the crowd to sing back lyrics about as deep as a paddling pool and as unique as a pair of white trainer socks showed me the audience of bands like DMA’s will drink up anything packaged with the label ‘indie’. Highlights included the bland chorus of ‘Delete’, which crooned “don’t delete my baby, don’t defeat her still”. While on surface level appealing, there was very little depth and this came across live just as much as it does on record. Again, while by no means bad, it was delivered with a lacklustre stage presence featuring very little between-song discussion. It was an underwhelming nasal appeal with a backing track of acoustic strings. By the time fan-favourite and ‘Sally Cinnamon’ knock-off ‘Emily Whyte’ had started, I was willing to let the mosh pits fan swallow me whole.

As the band ended on ‘Lay Down’, my mind had been made up. It wasn’t an awful gig. DMA’s were not the worst band I’ve ever seen. In some ways, I wish they had been. At least then, perhaps, they might have had a shot at being either original or unique. Instead, DMA’s committed one of the worst crimes in live music: they were boring. I couldn’t believe how much the crowd seemed to be soaking up what seemed mediocre at best and downright tiring at worst.

As I left dissatisfied, I couldn’t sway the nagging voice in my mind telling me that DMA’s popularity was largely due to the willingness of the ‘indie’ crowd to accept any music written by four white men with a fondness for bucket hats. Overwhelmingly unoriginal, DMA’s and Oasis have much in common: they’re responsible for irritating, laddish crowds with a fondness for trite lyrics coated in faux depth. Altogether, the night was disappointingly average and reminded me my indie phase was as dead as the idea of an Oasis reunion.