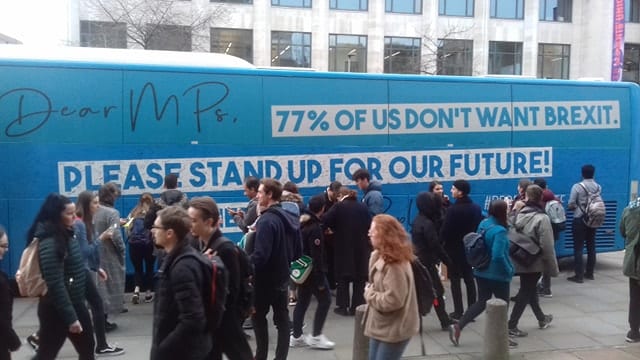 Our Future, Our Choice which is campaigning for a People’s Vote, arrived in Manchester last week as part of a national tour.

A behemoth of a blue bus was parked right outside the Students Union. Emblazoned across the side in bold, unmissable letters: “77% of us don’t want Brexit. Please stand up for our future!”

It was a sight for sore eyes. We often talk about how this generation has become more politicised and engaged, but from my experience, these politically charged spaces were often laden with a heady combination of hopelessness and cynicism.

Either people would be coming together to discuss the impending social, economic, and environmental apocalypse or they would be there to pad their CVs. Both respectable choices, but I for one, want more than that.

I would suggest however that this transcends the political message itself and the means through which it is disseminated. OFOC is a campaign and organisation that seems to be running on the message that things can get better. Who would have thought that people would respond well to a narrative that doesn’t end with some kind of catastrophic nightmare?

With every broadcasting channel, radio show and newspaper article seemingly jumping at the chance to give airtime and column space to the most shocking click-bait, and alarmist voices for the sake of novelty, seeing young people who are trying to shift the narrative entirely is refreshing.

OFOC’s audacity to suggest that there is an alternative to the narrative offered by our two political parties lies at the epicentre of its success in the last few months.

With activists involved from all sides of the political spectrum, the organisation offers an entirely different kind of politics; one that derives its success from unity and not division.

I’m not sure what’s going to happen in the next few weeks, needless to say, it will be tumultuous, but I think what we see here is a glimmer of hope. The chasm created by increasingly destructive populist movements is being filled by an optimism that I assumed had been destroyed by the dark spectre that has been consuming our political landscape for years.