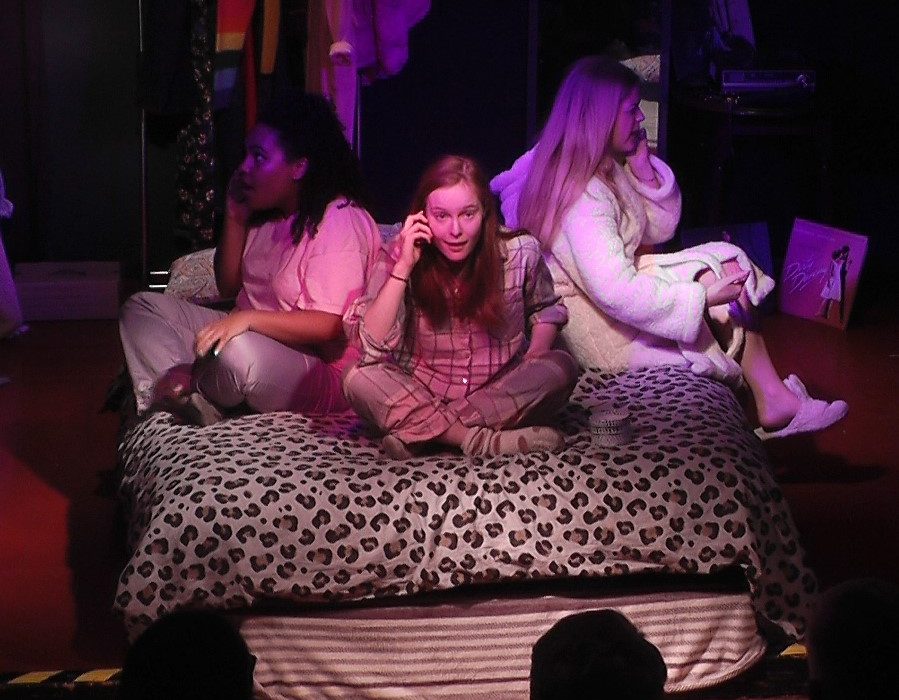 Swish Swish at the Three Minute Theatre (3MT ) followed three teenage girls: the lively and rather innocent Marcy (Mariella Dyckhoff), calm and organized Gabrielle (Hope Leslie) and brutally honest, confident Samantha (Lauren Owen). The trio are childhood friends who have vowed to call each other for an hour every morning as they get ready. However, the separation between them starts to cause problems after Marcy finds out her mother has cancer.

The play was written by the immensely talented Ellie Klouda – who also did the sound design, with co-direction by Lily Brittain. It is an ode to her school friends, her mother and grandmother; to the women who have shaped her life, and these relationships are evident in the heart warming storytelling. The intimate atmosphere of the 3MT went well with moments like Samantha’s monologue describing the intimacy of plaiting hair, engaging you in the lives of the three girls.

Rarely does any piece of media portray teenage girls so accurately. The conflict in this play was much more believable than many films and plays that merely focus on girls gossiping behind their friends’ backs. A particularly genuine and memorable scene saw the three girls dancing freely to Carole King, each in different ways that show their slightly different personalities (Marcy was in heart-shaped sunglasses, miming into her hairbrush). The comedic moments were also impressive, particularly the hilarious scene where Samantha described her boyfriend asking her if she was an organ donor during sex.

Much has to be said for the direction. All three girls had scenes where they had to do their hair onstage in a set amount of time and often these rituals were just as captivating as the scene taking place simultaneously.

All three actresses embodied their characters with facial expressions and movement. While often in acting, fidgeting is discouraged, these mannerisms made them seem more like real characters, as Samantha spread out her arms or Marcy folded each of her fingers. Their facial expressions were a glimpse into their consciousness, as we watched Gabrielle fighting her annoyance that her teacher said her hair was unprofessional and from the discomfort on Marcy’s face, we could tell Samantha’s words hurt her. Dyckhoff’s portrayal of Marcy was full of life, whilst capable of bringing the audience to tears when her face finally gave way to her grief.

A nice touch was including Gabrielle’s complicated relationship with her hair due to being mixed race, as she struggled to find the right products. However, I do think she could have played more of a role in the main plot-line as she sometimes seemed to only be a mediator for Marcy and Samantha. There were also some plot-lines that were opened such as Samantha questioning her sexuality and Gabrielle considering reaching out to her distant mother, which were not resolved. Of course, it is realistic that  in our tumultuous teenage years, you encounter many problems, some of which take a long time to resolve.

On the whole, a wonderful production, a truly genuine portrayal of female friendship and a showcase of talent.