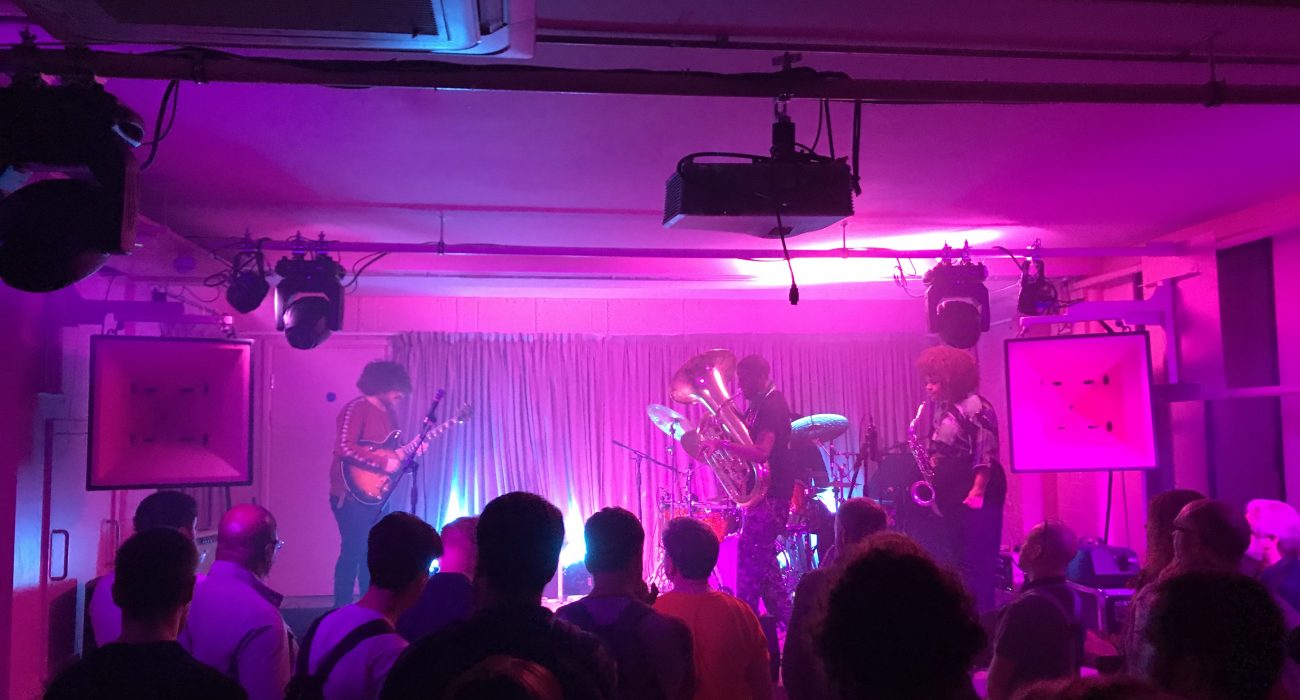 Going to see a tuba player live doesn’t exactly sound like a wild Friday night. However, Theon Cross, in his own words, is not “just a random tuba player.”

Despite being part of the renowned modern jazz group, Sons of Kemet, as well as the Mercury Prize-shortlisted group, The Seed Ensemble, the name Theon Cross has perhaps slipped under the radar. However, his personal take on jazz-funk, combining elements of dub and hip-hop, has to be one of the most creative and refreshing takes on this emerging genre.

The pink room at YES was the perfect venue for this intimate gig. Despite the sparse crowd he had everyone there fully engaged and dancing to his unique blend of jazz. During the track ‘CIYA’ he had the room sing a hook back to him and had them carry it through the entirety of the song: the crowd’s voice in unison becoming the fifth member of Theon Cross’ band. This immediate connection he had with the crowd was especially impressive considering how little he conversed with them.

One of the highlights of the gig was how inclusive Theon Cross was of his incredibly talented band. The simple line up consisted of drums, an electric guitar, and a saxophone. It was interesting to hear the juxtaposition between the electric guitar and the tuba: two instruments you would not expect to see together. This almost oxymoronic combination of the sharp electric guitar and the much softer tuba made for a captivating live performance. Additionally, seeing the tuba act as the ‘lead singer’ of this band made it seem as if Theon Cross was using it to speak in a language we couldn’t quite understand, yet could connect to nonetheless.

Each member of the band was handed the spotlight to perform a solo of their own, including Manchester saxophonist, Chelsea Carmichael. Her solo was a sweet and slow jazz ballad that provided an appreciated interlude from the intensity of the group as a whole. Theon Cross joined in at the end of her solo, the deep resonating tones of the tuba perfectly complimenting the high-pitched counter-melody on the alto sax. This contrast in pitch made it feel as if you were witnessing a conversation between these two brass instruments.

The only disappointment of the evening was that there wasn’t a bigger crowd. While Theon Cross definitely made the most of the gig and had the whole room up and dancing, the night would have been even better had the room been full. It was also a shame to see such a talented musician play to a crowd half the size of what it should have been.

As the gig came to a close, the crowd, despite being small, was insistent for an encore. Theon Cross did not disappoint, coming back on stage to deliver almost 10 minutes of brilliantly upbeat music to the crowd’s great appreciation.

Theon Cross’ unique blend of jazz-funk proves that he is so much more than just a tuba player. The combination of all the contrasting instruments made for an extremely memorable night of live music and really gave the audience an insight into this emerging genre of music. The small crowd and the intimacy of the venue definitely made the gig feel like Manchester’s best-kept secret that night.