Katie Hourigan reviews The Channel, an installation which is highlighting the stories of refugees
Arts

A woman at ‘The Channel’ exhibition. Photo credit: Journeys Festival

Taking place in locations across Manchester, Journeys Festival International seeks to give the stories of refugees and asylum seekers – those who are so often pushed to the very margins of society – the space to truly be heard. These stories are to be shared in a number of ways, including: visual art, theatre, sound installations, spoken word, museum exhibitions, discussions, street art, and song. The majority of these events are free for the public to engage with, in small pockets across the city. The festival is in collaboration with the University’s History department and its new project, ‘Reckoning with Refugeedom’, as well as both local and national organisations such as ArtReach, HOME and Manchester City of Sanctuary.

Despite what mainstream media may portray, or neglect to portray, the refugee crisis has not gone away. While the spotlight often remains fixated on the blunders of Boris and Brexit, we hear very little of the people and families whose lives are being uprooted and displaced every day. UNHCR states that there are an estimated 70.8 million people globally who have been forcibly displaced from their homes; a figure that will only continue to rise if the current state of climate emergency is not resolved.  Meanwhile, in the UK, the Home Office have been heavily criticised for the fact that many people, predominately asylum seekers, are being held for indefinite amounts of time in detention centres. This inevitably creates an anxious state of limbo, one that will chip away at the morale, dignity and hope of those who are already in a vulnerable state.

The Channel by Isobel Tarr hopes to spark emotional engagement with these issues through the simple act of conversation. The installation invites you to step inside a telephone booth (currently located in the entrance of the Manchester People’s Museum), to listen to questions from the general public posed to those currently detained in UK immigration removal centres, and hear their response. Those asking questions ranged in age and profession; a young mother, a therapist, and the voice of someone who clearly works alongside refugees and asylum seekers. There were also broader questions asked that suggested the person behind the recording may never have come across these issues before. On either side, the messages carried within them a genuine acknowledgement of the humanity of the person on the other end of the line. 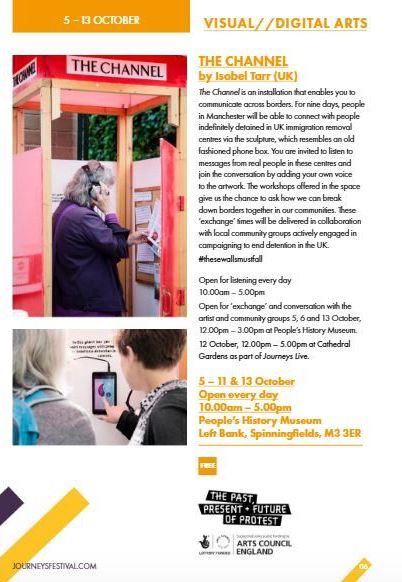 Creative expression can be a valuable tool in helping to navigate questions of language, identity and the practicalities of a new life that are the result of forced migration. For those viewing the pieces, there is the opportunity to learn more about a topic that is so frequently polarised and politicised until it seems too sensitive to breach. The art created and showcased in the festival reminds us of the humanity, names, and lives of the people behind the term ‘refugee’, who otherwise feel distant and homogenized. It is a stark reminder of what refugees have brought, and continue to bring, to this city and country, enriching what is an already a thriving multicultural tapestry of people and ideas.

Alongside ‘The Channel’ there are many other events taking place as part of the festival, running from the 4th to the 13th October. Still to come is a series of video portraits entitled Angels projected around the city on the 11th/12th October and talks by Iranian artists on ‘protest art and culture in post-revolutionary Iran’ on the 13th of October.

West Art Collective is an artist-led organisation based in Antwerp Mansion, Rusholme. Known for their impressive art and music displays, the events hosted by the Collective at this iconic Manchester venue do not disappoint.   The Antwerp Mansion, tucked away right off the side of Curry Mile (in the turning next to Cake Box), comes alive […]

Pottering around at HandleBar

Reminisce your crunchy childhood by filling your evenings with arts and crafts at Fallowfield’s latest bar: HandleBar. From Drink & Doodle, life drawing to pottery with Dave, you’ll become an artist in no time

Nude painting isn’t for everyone, but it’s a good way to let go of study stress and let your hidden artistic expression flow… and grab a pint after