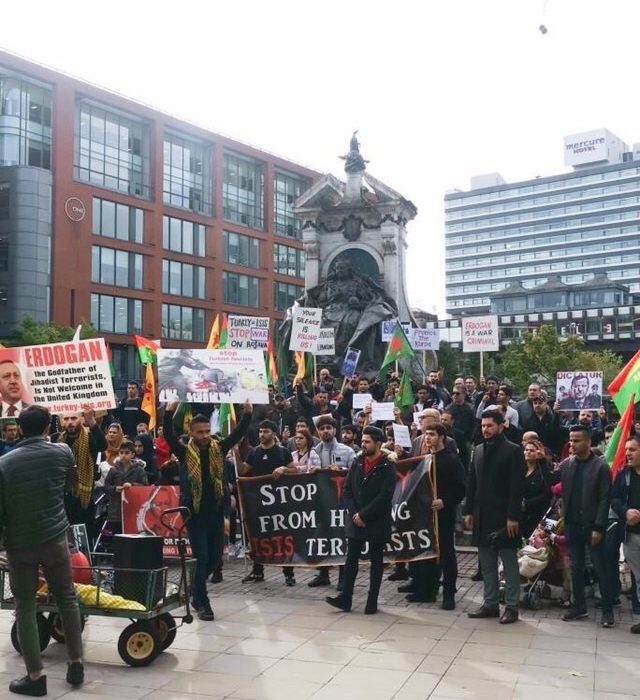 The protests follow America’s decision to pull troops from Syria, previously stationed to help the Kurdish-led area fight the Islamic State. Since this decision, the security at their border has been weakened and has enabled for Turkish military assault on the region.

It is estimated that around 250 to 300 people attended the protest in Piccadilly. Kurdish flags could be seen waving amongst the crowd, along with signs which included phrases such as, “Stop Kurdish ethnic cleansing,” “Your silence is killing us” and “Boycott Turkey”.

Since the protest, the UK has announced its decision to suspend the sale of arms to Turkey. Foreign Secretary Dominic Raab discussed the government’s decision: “The UK government takes its arms export control responsibilities very seriously and in this case, of course, we will keep our defence exports to Turkey under very careful and continual review. No further export licenses to Turkey for items that might be used in military operations in Syria will be granted while we conduct that review.”

The protest on October 12th, organised by Friends of Kurdistan Manchester, was one of many to take place around the world that day.

Kat Wright is one of the four to five thousand Kurds thought to be living in Greater Manchester. During the protests on Saturday, she told Manchester Evening News: “We are asking for the UK to stop the sale of arms to Turkey and we are calling on international aid for the region.”

Kurdish University of Manchester student Bayse Genc commented on the significance of the demonstrations: “These protests are really important in both drawing attention to the cause and showing solidarity with the Kurds, Yezidis, Assyrians, and Syrians whose lives are currently at risk.

“We can’t let the lives of millions of civilians be put at risk in silence, and there have already been casualties, including children and feminist activists, in the region. World leaders and governments must do more to avoid the resurgence of ISIS and the deaths of so many innocent people in their own land.”